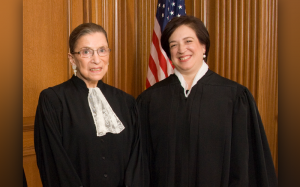 On June 17, 2015, former U.S. Magistrate Judge Joe Miller wrote and published an article calling for Justices Ruth Bader Ginsburg and Elena Kagan to recuse from participating in the consolidated same-sex marriage cases now pending before the U.S. Supreme Court on the ground of bias. In support, Miller noted that both justices had officiated in the marriage ceremonies of same-sex couples, and that Justice Ginsburg had gone so far as to strongly suggest in public that the time for same-sex marriage had arrived.

​In the course of his article, Miller also reported that the Foundation for Moral Law, which had submitted a friend-of-the-court brief in favor of traditional marriage, had also submitted a motion in support of Justices Ginsburg’s and Kagan’s recusals. Importantly, Miller also reported that not only had the Court not ruled on the Foundation’s motion, but that the motion had not even been posted on the Supreme Court docket. While a delay in posting can occur for a number of reasons, none applied here. Did someone at the High Court not want to acknowledge that such a motion had been filed?

​Now we may have some indication that the U.S. Supreme Court uses Google Alerts, because shortly after the Miller article was published, on either June 17 or 18, 2015, the Foundation’s recusal motion suddenly appeared on the docket of the U.S. Supreme Court. Under a date of May 21, 2015, the entry read: “Request for recusal received from amicus curiae Foundation for Moral Law.” The new entry raises new questions.

​First, the missing motion. The Foundation’s first motion to recuse consisting of eight pages was submitted on April 27, 2015 (and date and time stamped on April 27, 2015, at 11:47 a.m.) — a good three weeks before the Supreme Court claims that it was “received” on May 21, 2015. The Foundation for Moral Law later filed a second motion to recuse consisting of four pages on May 21 (date and time stamped on May 21, 2015, at 11:28 a.m.). The second motion was filed after Justice Ginsburg performed another same-sex wedding, and was to the effect of:“there, you did it again.” The second motion refers back to the first motion. Why is there only one entry on the Court’s docket sheets? What happened to the original motion?

​Second, the name. The Foundation document is entitled a “Motion.” Why is it entitled on the docket as a “Request”?

​Third, the action. According to the Court rules, a “Motion” is “filed” with the Court. Why is the action taken by the Court described only as “received” and not “filed”?

​These points may appear to be minor – words that only lawyers would quibble over. But in reality, they suggest that the High Court, for an inordinate time, has ignored the recusal motion. While the Court has finally acknowledged that some recusal filing was made, it certainly gives no assurance that any ruling on the motion will be forthcoming before the Court decides the same-sex marriage case.

​Federal law requires judges and justices to recuse from any case in which their impartiality “may reasonably be questioned….” 28 U.S.C. section 455. Moreover, Canon 3A(6) of the Code of Conduct for United States Judges states: “A judge should not make public comment on the merits of a matter pending or impending in any court….” However, as this case is demonstrating, the Supreme Court appears to believe it is under no obligation to abide by that federal law and judicial Ethical rule.

​First, while Justices Ginsburg and Kagan have an ethical duty to avoid commenting on cases, and a statutory duty to recuse when their impartiality “may reasonably be questioned,” as a matter of practice, each justice is the sole judge of her own case. While a decision of a lower federal court judge may be appealed to a higher authority, each U.S. Supreme Court Justice has the final word on his own fitness to serve. These two Justices should have addressed the question publically prior to participating in oral argument (issue one and issue two) on April 28, 2015, but they did not. Since these two Justices ignored problems caused by their conduct, the remainder of the Court should have stepped in and addressed the issue for them, but the other seven Justices have remained silent.

Second, even now, the Foundation for Moral Law’s motion to recuse is not officially recognized by the High Court as being a motion, the docket sheets characterizing the motion as a mere “request.” Having no obligation to rule on a mere “request” — especially one that it represents was not even “filed” — Justices Ginsburg and Kagan would seem to be free to disregard the matter completely without obligation to give any reasons whatsoever why they could be impartial.

​The effort to have Justices Ginsburg and Kagan recuse is not just a lonely one of former federal Magistrate Judge Joe Miller from Alaska and the Foundation for Moral Law in Alabama. It is also supported by the American Family Association, Vision America Action, the National Organization for Marriage, the U.S. Justice Foundation and — in a story largely ignored by the mainstream media — supported by an unanimous vote of the Louisiana House of Representatives, as well as Louisiana Governor Bobby Jindal.

​Should Justices Ginsburg and Kagan continue to disregard their apparent conflict of interest, the long-standing legal maxim that no one should be a judge in his own case again would be upended. And if the motion is then disregarded by the Court as a whole, to which it was addressed secondarily, the opinion of the two justices on their own fitness to participate in the vote would stand. In either event, for many people, continued inaction on these recusal motions will not only erode public confidence in the U.S. Supreme Court, but would call into question the constitutional legitimacy of its forthcoming same-sex marriage decision.

Herbert W. Titus taught Constitutional Law for 26 years, and concluded his academic career as the Founding Dean of Regent Law School. William J. Olson served in three positions in the Reagan Administration. Together they have filed over 80 briefs in the U.S. Supreme Court, and dozens more in lower courts, addressing important public policy issues. In the recent same-sex marriage cases, they filed an amicus curiae brief in the DeBoer case in the Sixth Circuit, and another amicus brief in the Obergefell case in the U.S. Supreme Court. They now practice law together at William J. Olson, P.C. They can be reached at traditionalmarriage@lawandfreedom.com or twitter.com/Olsonlaw.

This article is part of a series on “Building Resistance to Same-Sex Marriage” which appears on the USJF website. To support this important work, please make contributions the U.S. Justice Foundation. Permission is freely granted to publish, copy, reproduce, distribute, or excerpt from this article for any purpose

June 20, 2015
The Profound Consequences of Same Sex Marriage for Business and the Professions
Next Post

The Mental and Spiritual Benefits of Naps
In the latest edition of The Saturday Evening Post, there’s a story...
view all Eastern Orthodox blogs
What Are Your Thoughts?leave a comment