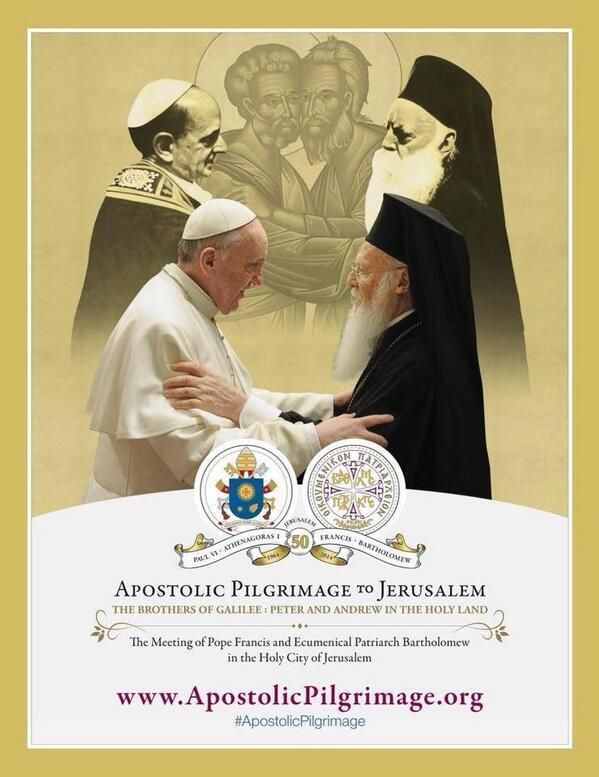 Is the pope Catholic?

Quoting from the Church Fathers, Catholic apologists like my friend Dave Armstrong will argue that the Roman Pontiff is successor of St Peter. To which I respond as a Byzantine Catholic: the See of Antioch also was founded by St Peter prior to his co-founding the See of Rome with St Paul.

All kidding aside, I agree with my Latin friends that historically the Roman Pontiff holds a special role in resolving disputes within the Church. In fact, Pope Francis’s ministry of unity has been particularly inspiring. The SSPX has reconciled in all but name only. And we are much closer to healing historical divisions with other apostolic Churches–the Eastern Orthodox, the Oriental Orthodox, and the Assyrian Church of the East.

The Church breathes through both its Eastern and its Western lung, St John Paul II states.

Of course, few Eastern Orthodox would deny the Roman Pontiff’s Petrine succession: at least within the first millennium of our common history. With respect to both Catholic and Orthodox traditions, I would remind everyone that Orthodoxy is not historical Protestantism. (Though most Protestants I encounter today very much respect Pope Francis). The controversy from the Eastern Orthodox perspective is not Rome’s claim of apostolicity, but recognition of the apostolicity of the other four great patriarchates: Constantinople, Alexandria, Antioch and Jerusalem.

The main point I would ask my Latin brothers and sisters to consider is the following: Christ appointed Peter first among the apostles; He did not appoint Peter as their collective replacement. Similarly, as the true head of the Church, Our Lord humbled Himself to wash Peter’s feet and those of the other apostles. He never ordered the eleven to kiss Peter’s feet.

There is a fundamental difference between acting as an elder brother in Christ and acting as a religious tyrant. Responding in 1848 to Pope Pius IX’s condescending letter “To the Easterns,” the Orthodox Patriarchs and their synods open with the following observation:

The holy, evangelical and divine Gospel of Salvation should be set forth by all in its original simplicity, and should evermore be believed in its unadulterated purity, even the same as it was revealed to His holy Apostles by our Savior, who for this very cause, descending from the bosom of God the Father, made Himself of no reputation and took upon Him the form of a servant (Phil. ii. 7)…

Christ made Himself a servant. He also expected His apostles to imitate Him in acting as servants. A successor of St Peter should – like St Peter imitating Our Lord – act as a servant to all. In fact, as St Peter’s successor, the Roman Pontiff bears an even greater burden to act collegially for the unity of the Church. When the Roman Pontiff acts like St Peter in a spirit of fraternal charity, the Eastern Patriarchs historically have responded positively to his Petrine leadership.

A recent example of this is the public friendship between Pope Francis of Rome and Ecumenical Patriarch Bartholomew of Constantinople. As of this writing, the two have engaged publicly in a number of ecumenical activities, giving each other support.

In contrast, where a pope acts imperiously – demanding obedience and differential treatment as successor to St Peter, rather than follow St Peter’s example in fostering cooperation among the apostles in service to God’s people – Eastern Christians shy away for lack of recognizing the voice of their shepherd.

And indeed, unity with the East was impacted negatively. In the aftermath of the First Vatican Council, many Eastern Catholics – in light of what they perceived as Latin hostility to the various Eastern patrimonies – made their way back to their Eastern non-Catholic counterparts. This after several centuries of rapprochement between East and West.

Fortunately, this period of estrangement began to thaw again with the Second Vatican Council. The lesson here, however, is that it is not sufficient for the unity of the Church that a Roman Pontiff simply succeed St Peter in the Apostle’s chair. He must also succeed St Peter in fraternal spirit.

Indeed Pope Francis is Catholic. However, having been entrusted by Christ in a special way with the charism of unity among apostolic successors (and for the sake of restoring such unity) Francis also understands that the Pope must be Orthodox.

May 12, 2018 On Waterboarding and Torture: What about Atheists and Youth?
Recent Comments
2 Comments | Leave a Comment
Browse Our Archives
Follow Us!

Simcha Fisher reports on a bizarre...
Catholic and Enjoying It!
Related posts from Orthodoxy in Communion With Rome