Passing on the Faith: Children’s Sculptures

In August, Patheos hosted a site-wide conversation about Passing On the Faith to children. I’m a little late to the table, but I have a  related post to share anyway!

As I’ve written previously (see: Mamapriestess), the sociocultural value of a divine presence that validates women’s bodies cannot be overestimated. Indeed, I believe that patriarchal religion in its most destructive way grew out of the devaluation and rejection of female bodies. A religion that rejects the female body, that places the male and its association with “the mind” and the soul rather than the earthy relational connection of body, is a religion that easily moves into domination and control of women. Reclaiming Goddess, reclaims women’s bodies—names them not only as “normal,” but as “divine,” and this is profoundly threatening to traditional Judeo-Christian belief systems. In her classic essay, “Why Women Need the Goddess,” Carol Christ quotes feminist theologian Mary Daly (Beyond God the Father): “If God in ‘his’ heaven is a father ruling his people, then it is the ‘nature’ of things and according to divine plan and the order of the universe that society be male dominated. Within this context, a mystification of roles takes place: The husband dominating his wife represents God ‘himself.’ The images and values of a given society have been projected into the realm of dogmas and “Articles of Faith,” and these in turn justify the social structures which have given rise to them and which sustain their plausibility.”

In the same essay, Christ explains: “The symbols associated with these important rituals cannot fail to affect the deep or unconscious structures of the mind of even a person who has rejected these symbolisms on a conscious level—especially if the person is under stress. The reason for the continuing effect of religious symbols is that the mind abhors a vacuum. Symbol systems cannot simply be rejected, they must be replaced. When there is not any replacement, the mind will revert to familiar structures in times of crisis, bafflement, or defeat” (p. 73). I notice this among some friends and family members—while not identifying as Christian or religious, they may turn to Christian phrasing or symbolism to express ineffable concepts. They have no other language or framework for explaining their experiences or ideas (as an example—near miss in a car and someone says they were praying they’d be all right and they guess “the man upstairs” must have been listening). I’ve noted before that it is very important to me that my sons are being raised in a home in which female connection to divinity is very normal and that Goddess images are all around them. I hope that their default symbol and system of belief as adults will therefore include Goddess, regardless of how their individual spiritual paths develop. As an example, I have a book for children called Big Momma Makes the World in which a full figured, practical-looking woman holding a baby on her hips creates heaven and earth and everything in between and, “it was good, it was real good.” I love that my sons are growing up with this sort of imagery about creation. For me, Goddess religion and spirituality is as much about sociocultural valuation (or devaluation) of women and making a feminist political statement, as it is about lived experience. Both are very valuable to me.

I have been creating birth art about my pregnancy, birth, and motherhood experiences since my first pregnancy in 2003. And following a significant miscarriage in 2009 and a subsequent pregnancy-after-loss journey in 2010, I began creating a series of polymer clay goddess sculptures. These sculptures became a 3-D journal of my life with my daughter. Each figure either had a message for me or was created to express a message or a lesson or to incorporate some aspect of my identity or to capture a memory. The figures that developed for me this year were a collection of what I call “mamapriestess” figures, encompassing the balance of priestessing my community and priestessing my own hearth.

In early February as I worked on a new sculpture, my then six year old son worked at the table too and presented me with a special gift of his own design:

“This is the Goddess of Everything,” he told me. “See that pink jewel in her belly, that is the WHOLE UNIVERSE, Mom!!”

After this, he continued making new sculptures for me periodically, always with a title of his own invention. My older son made me a sculpture for my birthday this year as well. Here is a little peek at their work: 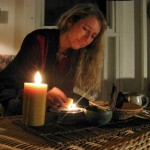 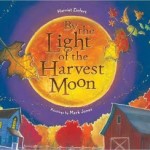