Honouring the Feminine at the Doll Festival

Honouring the Feminine at the Doll Festival February 28, 2016 Megan Manson

For me, early Spring is the season of the Goddess. Partly because of Ostara – I have always viewed Ostara as a “feminine” festival, with its emphasis on feminine imagery like eggs, flowers, hens, pastel colours and of course its namesake Goddess Herself. Even in the Christian calendar, there is a touch of the feminine about Easter; Mothering Sunday is held three weeks before Easter in the UK and is a time for children to express their gratitude to their mothers by giving them cards and presents.

In Shinto too, this time of year has a connection with the Divine Feminine. March 3rd is Hina Matsuri, sometimes translated as “Doll’s Day” or “Girl’s Day,” and as its English name suggests it celebrates girls and women. The most well-known tradition of Hina Matsuri in contemporary Japan is the custom of displaying ornate dolls, called hina-ningyō, in family homes and public places. Hina-ningyō displays vary, but most of them will feature two dolls representing the Emperor and the Empress as the centre piece. In large displays, they may be accompanied by other dolls on lower tiers depicting courtiers, musicians and guards.

Hina Matsuri dolls were not always linked with nobility. In fact, the festival is rooted in what Pagans would undoubtedly call witchcraft. Thought to have its origins in a 3,000 year old Chinese ritual, Hina Matsuri began as a means of ridding one’s self of bad luck and impurity by transferring them on to paper dolls, which became known as hitogata. This would be done by rubbing a paper doll over one’s body, and then setting it adrift in a river or the sea to wash away the negative energy. Those familiar with Frazer’s Golden Bough may observe that this is a classic example of sympathetic magic, combining elements of homeopathic or imitative magic (making the image of a person and washing that image’s impurities away) and contagious magic (rubbing impurities from the skin on to the image so they can be transferred away from the individual). You could say that the hitogata is in fact a form of poppet doll.

The tradition of setting dolls adrift into bodies of water is still held in some parts of Japan at Hina Matsuri, as is the practise of using hitogata to rid one’s self of impurity.

It’s interesting to note that purification rituals involving dolls around Spring are recorded occurring in 19th century Europe in The Golden Bough. According to Frazer, around Easter time, villagers in eastern Europe would carry a puppet representing Death out of the village, while inviting Spring in –  thus banishing sickness and impurity, and promoting the fertility of plants and animals.

In Japan’s Middle Ages, the March tradition of using dolls as purification tools merged with the practice of collecting and playing with dolls, hiina-asobi, a popular activity among girls and women of noble birth at the time. Dolls and women became increasingly linked, leading to the development of the Hina Matsuri festival to pray for the health and happiness of girls.

Dolls are not the only feminine symbol associated with Hina Matsuri. An alternative name for the festival is Momo no Sekku, or “Peach Season.” This refers to the fact that early March is when the peach blossoms are in bloom. Both the blossom and the fruit are pink in colour, so you’ll see a lot of pink décor around Hina Matsuri. What’s more, the fruit itself represents female fertility in Japan: It’s appearance is undeniably yonic, and in one of Japan’s most famous folktales, Momotarō, the hero is born from a peach.

I find it very interesting that both Hina Matsuri and Ostara feature food representing female fertility – Hina Matsuri has the peach, and Ostara of course has the egg. It’s one of many symbols that the two festivals have in common, in addition to flowers, the colour pink, and purification rites. It’s also curious to note that the word “Hina” in Hina Matsuri, when written as a kanji character, is 雛 – the same kanji used for the word “chick” in Japanese, yet another common Ostara symbol.

These feminine symbols in both Hina Matsuri and Ostara remind me to be thankful to all the women in my life who have nurtured me – my mother, sister, aunts, friends, teachers, and of course the Goddess – and to pray for continual blessings for all the women of the world.

And if the men are feeling a bit left out by all this, don’t worry – your time to be celebrated in both Paganism and Shinto will come in May…. 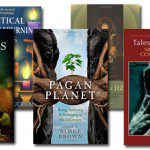 March 1, 2016 Paganism and Motherhood
Recent Comments
0 | Leave a Comment
Browse Our Archives
get the latest from
Pagan Tama
Sign up for our newsletter
POPULAR AT PATHEOS Pagan
1