Celebrating the Neopagan Wheel of the Year in Japan

This Monday July 18th is a public holiday in Japan known as Umi no Hi, or “Ocean Day.” It’s one of 16 public holidays in Japan, which is quite a large number compared with many other countries (on the flip-side, few Japanese take annual leave from work for a variety of reasons). Fortunately for Neopagans living in Japan, not only do many of these public holidays fall on or close to the eight Sabbats of the Wheel of the Year, but several lend themselves to Pagan celebrations in their own right.

Imbolc (February 1st/2nd)
Imbolc falls just one or two days away from the Shinto festival of Setsubun in February. Like Imbolc, Setsubun commemorates the gradual end of winter and the beginning of spring. Although it isn’t a public holiday, it is a time of celebration in Japan, with activities such as bean throwing (mame-maki) taking place at Shinto shrines to drive out harmful spirits. By taking part in Setsubun festivities, Neopagans can get a feeling of communal celebration of this time of year, even if Setsubun practises are somewhat different to Imbolc. You can read more about Setsubun and a comparison with Imbolc here.

The closest public holiday to Setsubun is National Foundation Day (Kenkoku Kinen Bi) on February 11th, which has some Shinto ties as it marks the date on which the legendary Emperor Jimmu founded the nation according to Japan’s ancient texts. 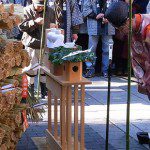 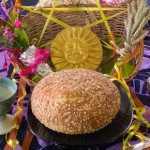