Continuing with my exploration of some of the key differences between Western Neopaganism and Shinto in Japan, with Samhain on the way I thought I’d look at the attitudes towards the “darker” aspects of existence, especially death, in both religions.

Both Neopaganism and Shinto acknowledge that there are some forces in nature that can be harmful to us, but unlike other religions such as Christianity, neither necessarily accepts the idea of absolute “good” and “evil.” Either one would probably say that anything we consider good usually has a bad element to it, and anything we consider bad has something good somewhere – just like the Daoist Yin-Yang symbol, in which the white half contains a black spot, and the black half contains a white spot. Many Neopagans and Shintoists would also argue that there is really no such thing as two opposing forces of “good and bad” or “light and dark” – they are merely perspectives. And on the subject of death, both Shinto and Western Paganism are more concerned with life in the here and now, rather than what happens after death, and neither have clearly defined ideas about the afterlife.

But although Western Neopagans and Shintoists may have similar ideas about “light and dark” aspects of life, this does not necessarily mean these things are treated in the same way by the two religions.

Neopaganism has a strong tradition of not only accepting the “darker” forces of nature, but actually celebrating them. Neopagan attitudes towards death are a good example of this. Death may be one of the most unpleasant and frightening things humans must experience, but Neopaganism teaches that death is simply a natural part of existence, a mere turn in the cycle of life. That’s why Samhain is a time for celebrating the spirits and deities connected with death as much as it is a time of remembrance. This, coupled with the nocturnal habits of many Pagans (rituals often take place at night), also means that Western Pagans may use a lot of imagery associated with death and darkness in their rituals, such as skulls and the colour black, as well as calling upon and honouring deities of darkness.

In contrast, despite accepting that “light” and “dark” are not really polarised, Shinto in general tends to avoid images related to death and darkness. While black and other dark colours are commonly used by Western Pagans, Shinto is usually associated with white, as well as bright red, gold and green – black is avoided for the most part. Traditionally, Shinto aesthetics strive to create an image of purity and serenity, which are not seen as compatible with darker images. Death is considered a form of impurity and so Shinto shrines are kept free of anything to do with death; Shinto funerals are rare for this reason, and Japanese people purify themselves by throwing salt over their bodies after attending a funeral or being in contact with the deceased. This is why most Japanese turn to Buddhism for funeral rites and ideas about death, as Buddhism has a lot more to say and perhaps more comfort to offer when it comes to grieving for loved ones as it expresses ideas about reincarnation and nirvana. Shinto prefers to focus on celebrating that which is living and positive, rather than dwelling on things that can cause sadness or discord.

(This is a somewhat simplified interpretation of Shinto attitudes to death. In fact, death is important in Shinto because many Shinto kami (deities) are in fact deified spirits of deceased people. But in general, Shinto is considered a “religion of life.”)

As both a Western Pagan and a Shintoist, it can sometimes be difficult to reconcile these two attitudes. I’m also a bit Goth, so naturally I’m pretty positive about skulls and black and other “dark” imagery! My house is full of skull designs and I am particularly drawn to deities with connections to death, such as Hecate, Thanatos and Santa Muerte. But out of respect for the kami, I try to keep the death imagery to the confines of my Neopagan altar and away from any of my Shinto rituals. For example, I have a lovely bottle that I got for my birthday which has skulls and a spider design on it. It would be perfect for storing sake for offering to the kami, if it weren’t for the death imagery! I therefore intend to use this bottle for more Neopagan purposes rather than Shinto ones. And when it comes to Samhain, I’ll probably place soul cakes and pumpkin on my Shinto altar to Inari, but keep it free from more explicit death imagery – this will all be saved my Neopagan altar.

I think I’ve managed to strike a fair balance between celebrating the darker aspects of life in my Neopagan rituals, while keeping my Shinto practises focused on life and light. In a way, it’s similar to how Shinto and Buddhism practised together in Japan according to their different functions. But while most Japanese would consider death rituals to be the function of Buddhism, I turn to Paganism for this function instead! 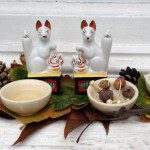 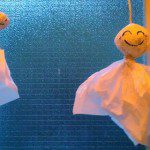 October 9, 2016 Make a Japanese "Weather Ghost" Charm
Recent Comments
0 | Leave a Comment
"Should buy a shotgun and threaten the little git!"
Llewellyn Jaames Why I Don’t Do Rituals In ..."
""If you subscribe to a religion...your actions are sacrilegious..."? Rude to assume none of them ..."
Lady_Ashmire Pagan & Shinto News: Mist Descends ..."
""Stonehenge lookalike for sale in Devon."Thank the gods for my wives who have the wisdom ..."
kenofken Pagan & Shinto News: Mayor Of ..."
"You would need to put Gerald Gardner and Ross Nichols into that category as well. ..."
Gordon Cooper Pagan & Shinto News: Couple Find ..."
Browse Our Archives
Related posts from Pagan Tama