Although they now follow the Western calendar rather than the Chinese lunar calendar, the Japanese hold the Chinese zodiac in equally high regard. Japan is currently celebrating the beginning of the year of the tori; commonly known as the Year of the Rooster in English-speaking countries (or Year of the Cockerel/Cock here in the UK). However, in Japan tori does not specifically a male or female bird, and so you’ll see representations of both roosters and hens for this year. It would perhaps be more accurate to call this year the Year of the Chicken, or more specifically, the Red Fire Chicken. 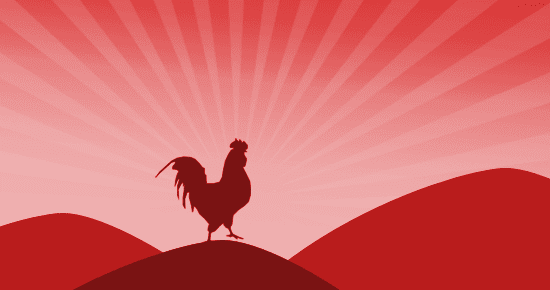 Chickens, and particularly roosters, are creatures of complex symbolism. The rooster is territorial and aggressive towards other roosters, hence its use in cockfighting in cultures throughout the world. Roosters can therefore stand for war and military power. The Hindu war god Kartikeya carries a rooster emblem on his flag. Cockfights have been staged as a form of sacrificial ritual in some south east Asian spiritual traditions. At Ragnarök itself, the Norse narrative of the end of the world, it will be a cock’s crow that signifies the beginning of the apocalyptic battle of the gods.

The colours red and fire, the respective colour and element of 2017, are likewise associated with conflict. Red is the colour of passion, anger and bloodshed; fire, a symbol of destruction and violence.

With political uncertainty facing many superpowers across the word, coupled with ongoing territorial disputes and terrorist atrocities, war and bloodshed are no doubt among the worries facing many people at the start of 2017.

But by on large, the chicken is a positive symbol.  The rooster is well known for its habit of crowing at dawn, possibly as a way of asserting its dominance over its territory. The fact that the rooster seems to welcome the Sun each morning meant that it was only natural that it became regarded as a solar animal – and by extension, a symbol of the triumph of light over darkness.  It is sacred to a number of solar deities, including the Greco-Roman Apollo, the Mesopotamian god Nergal and the Celtic god Lugh. The reverence for the rooster is not limited to the Pagan faiths; it is a sacred symbol in Christianity and Islam too, probably due to its connection with the dawn and light.

Additionally, the chicken represents hope through creation. Roosters are also known for their high sexual activity, and this, coupled by the resemblance of the rooster’s beak and wattles to the male genitalia, has also made them a symbol of male sexuality. These associations can be seen in modern slang; the word “cock” is a taboo term for the penis. The female chicken, the hen, is arguably even more closely associated with fertility. The hen’s egg is one of the most profound symbol of birth and creation, while the hen itself has long been associated with motherhood from ancient times right up to present day. Consider the expression “mother hen” and “broody,” both of which use the hen as a metaphor for the maternal instinct.

The chicken is a highly revered animal in Shinto. It represents Amaterasu Ōmikami – kami of the Sun and the most important kami in the Shinto pantheon. If you visit Ise Jingu, the main shrine to Amaterasu, you will see lots of white chickens running loose in the shrine complex; these are Amaterasu’s sacred birds. As an earlier post at Patheos by Liz Fisher recently pointed out, Amaterasu’s emergence from darkness to light brings a powerful message of life and hope.

Amaterasu is connected with the two other symbols mentioned previously – red and fire. In Japan, red represents the Sun itself, and so it is a sacred colour of life and joy in Shinto. Fire too is revered in Shinto. It is the giver of light and warmth, and has the power to purify.

The chicken, the fire, the colour red. They can be interpreted in two different ways which at first seem opposing, but are in fact firmly connected. The aggressive rooster can symbolise war – but this aggression is the same territorial instinct that drives the rooster’s habit of crowing at sunrise. The same fire that can cause devastating destruction also forms civilisation’s most basic roots. The same red that represents blood shed also represents the vitality of blood, the source of life.

All three are essentially symbols of power. And they point to one overall symbol, the Sun itself – the ultimate source of all power on Earth, with the ability to give life through its light and warmth, and destroy life through drought and harmful radiation.

In 2017, we will be all be wrestling with things of great power – politics, ideology, technology, religion. Whether or not we wield these things as weapons bringing pain and death, or tools bringing healing and life, is up to us. We need to tread with carefully and respectfully always. 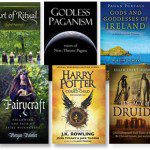 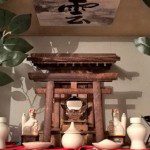 January 15, 2017 Obtaining and Displaying a Kamidana (Shinto Home Shrine)
Recent Comments
0 | Leave a Comment
"Freyja was the original cat lady!"
IvanTheHare Pagan & Shinto News: Witchcraft Group ..."
"Aren't the needle lemons an Aradia thing? Not the brightest move leaving them where they ..."
IvanTheHare Pagan & Shinto News: Canadian Police ..."
"Years ago while I was banishing a misbehaving fox spirit that I'd become attached to, ..."
IvanTheHare Inari, Japan’s “Fox God”
"I remember hearing that black cats were commonly used symbols in social justice magic, but ..."
Brigid'sFlamekeeper Pagan & Shinto News: Witchcraft Group ..."
Browse Our Archives
get the latest from
Pagan Tama
Sign up for our newsletter
POPULAR AT PATHEOS Pagan
1