Dua Lipa’s “Levitating” is a witchy, visual homage to Hekate
Pop Dust
Dua Lipa’s latest song “Levitating” officially features Missy Elliott and Madonna, but the real star of the video is an ancient goddess whose dark mythology is enjoying a 21st century renaissance…

The woman who inspired Wicca
First Things
Just under a century ago, in 1921, one of the strangest books ever to be published by Oxford University Press appeared in print: The Witch-Cult in Western Europe by Margaret Alice Murray…

The mistake of dismissing Margaret Murray and the origins of Wicca
The Mary Sue
As many have put it, “There was just one problem. Margaret Murray was wrong.” But … was she?…

UK: ‘It is a spiritual guide’ – meet the tarot reader in Highgate’s woods
Ham & High
The archaic practice remains popular in some quarters and, tucked away in Highgate, is the Tarot Forge of Cristina De Rossi…

Ireland: Strong following for Skibbereen’s new pagan shop
The Southern Star
Opening a ‘witchy shop’ in West Cork in the middle of a pandemic could have been a risky endeavour but it’s working for one creative couple…

The Pagan benefits of mainstream studies
Patheos Pagan: John Beckett
Perhaps surface-level Paganism can be something we turn on when the moon is full and turn off the rest of the month, but deep Paganism is something we live day in and day out. That means it has roots not just in theology but in all the arts and sciences…

Evening Standard
Clear skies and lower pollution levels in London saw many novice astronomers take up stargazing for the first time, while interest in star signs and the Zodiac is at an all time high…

Everything these sex tarot cards told me about my love life
Yahoo! Life
What could be better or more exciting than injecting a bit more magic into your sex life?…

‘Sword girls’ lead support for Shinto shrine to fix treasured blades damaged by floods
The Mainichi
A crowdfunding campaign to restore 77 precious Japanese swords that were submerged by torrential rain that struck the Kyushu region in July, is gaining support across Japan mainly due to young women who are interested in the historical weapons as fans of the online game “Touken Ranbu.”…

Folklore ‘Kesaran Pasaran’ fluffs spark joy for residents in northern Japan city
The Mainichi
“Kesaran Pasaran,” a white fluff ball that is said to float down from the sky and bring good luck to whoever finds it, has found a prominent place in this city on the Sea of Japan coast…

Does Hades depict Greek mythology authentically?
Screen Rant
A look at the plot and gameplay of the Hades Roguelike RPG released by Supergiant, and how accurately it portrays the ancient Greek underworld…

Ganesha in Japan: Is he worshipped in the land of the rising sun too?
Business Standard
The presence of temples in Japan for deities that look and sound like Lord Ganesha point to a time when Buddhism and Hinduism were intertwined…

UK: From war to ‘witch marks’ – graffiti carved into New Forest trees reveals past lives
The Guardian
Some are fading records of passionate woodland trysts, while others tell vividly of the fear of the supernatural that some still feel in the forest: they are the more than 100 pieces of graffiti carved into trees in the New Forest in the south of England that have been spotted by members of the public and collected by the national park authority…

Ghana: ‘Witch camp’ inmates to be enrolled on poverty scheme – Minister
Modern Ghana
The Minister of Gender, Children and Social Protection, Cynthia Morrison, has disclosed that the ministry will soon enrol inmates of the various ‘witch camps’ onto the Livelihood Empowerment Against Poverty ( LEAP) Programme.

Sassywood and witch persecution in Liberia
Modern Ghana
‘Alleged witch’ Sarah Togbe collapsed and died after taking local concoctions made from the bark of the Erythrophleum suaveolens tree.This form of trial by ordeal is called Sassywood, and is used to identify ‘witches’ in Liberia… 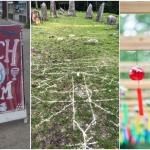 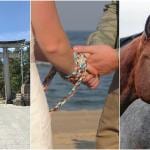