Several months ago I was part of a Facebook discussion pertaining to what books should be included on an “Essential Pagan Reading List” being put together for the Huffington Post. Ultimately the list ended up with twenty-nine books*, and while it was interesting to read what books people thought were “essential,” it was far more interesting to read people’s thoughts on the books they thought were absolutely “non-essential.” In my mind, one of the most influential Pagan books of the last twenty years is Silver Ravenwolf’s To Ride a Silver Broomstick, and it was one I suggested for the HuffPo list.

You would have thought that I had suggested adding the Malleus Mallificarum to the list judging by some of the reactions. There are a lot of people in the Pagan Community who absolutely hate Broomstick and think that it gives Modern Witchcraft (and Paganism) a bad name. What I found interesting is that while Silver didn’t make the list, Paul Huson’s Mastering Witchcraft: A Practical Guide for Witches, Warlocks and Covens did. The eclecticism of Silver’s work apparently raised a lot of eyebrows, and yet a book that actively talks about “the black arts” slipped onto the list without a second thought. 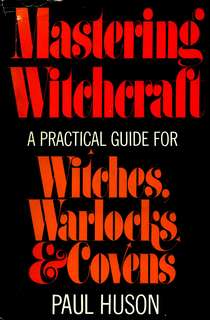 The original cover of Mastering Witchcraft. You certainly don’t see “Warlock” in too many titles these days.

I’m sure there’s a generation or two who sees Mastering Witchcraft as a foundational text (much like people who came up in the 90’s see Broomstick), and perhaps rightfully so. While I’ve always taken published Pagan Ritual for granted, it didn’t really exist before 1970. Sure there were Witchcraft books out there; Gerald Gardner had two books in print by 1960, but they weren’t “how to” guides. Gardner’s books were garbled histories with hints, stories, and myths. They weren’t primers on how to put together a ritual in your living room. By the mid-60’s there were a few Witchcraft books out there chronicling some of the modern players on the scene, and a few spell-books, but still no ritual.

Huson’s book is an important part of Pagan History because it was the first (or one of the first) book that actually gave you enough material to construct an effective ritual that we might recognize today as “Pagan.” Sure, it’s not all completely spelled out like most books full of ritual are today but it’s all in there if you take the time to assemble the jig-saw puzzle. Huson opened the floodgates, and by the mid-70’s there were several (though still not very many) books of Pagan Ritual in print. Some of the more notable ones include Lady Sheba’s Book of Shadows (1971), Magical Rites from the Crystal Well by Ed Fitch (1971), and Raymond Buckland’s The Tree (1974).

While Mastering Witchcraft has just enough in it that it feels familiar, there’s also a lot in it that’s completely unfamiliar to the Modern Witch. Huson opens up his book with the Bible story of the Nephilim (or Watchers); fallen children of the god Yahweh, and traces the history of Witchcraft through their history and influence. While this sounds pretty odd to Pagans in 2012, books about Witchcraft in the 60’s and early 70’s (and in some instances even later than that) often mixed all sorts of magickal and religious traditions together. Anything “occult” was thrown into the same cauldron just to see what might bubble up. With only a handful of magickal texts easily available it wasn’t uncommon to see things from the realms of demonology, the Cabala, The Key of Solomon, and folk magick converge in the same place. The tradition written about by Huson is a textbook example of this.

In addition to the rather jumbled set of influences, this book is unfamiliar in a lot of other ways, most notably in how “dark” it is. Throughout the book Huson calls the reader a practitioner of the “black arts,” and warns that casting spells almost always leads to conflict. Huson’s “witchcraft” is often full of danger and doom, with people slinging spells at each other like it’s Hogwarts. If I was a Christian trying to undermine Modern Witchcraft, this is the book I would quote. When Huson describes a magician under siege hiding in her magic circle it’s like a nightmare come to life. If this had been my first Pagan book it probably would have scared me out of practicing The Craft. 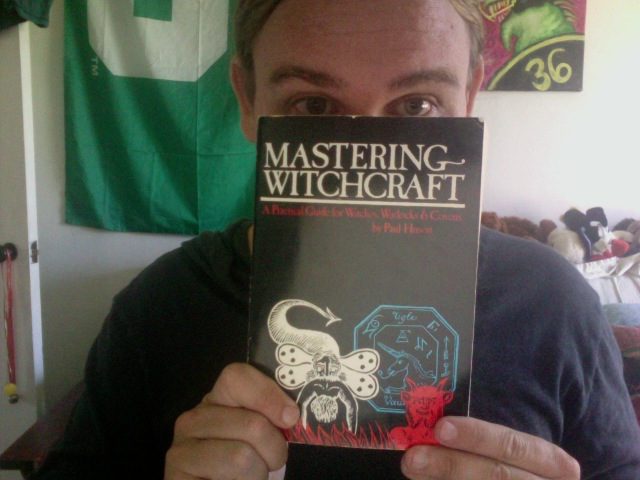 Me and the cover of MW that I grew up with, I’ll never be a fan of that weird little devil on the bottom right hand corner.

While Huson writes about the reader’s “victims” and how witchcraft can be used as an aid in sexual conquest, it sometimes feels like he’s having a good laugh while going about it. Huson comes across as a confident enough chap that I’m not sure he needed to sprinkle people’s food with “love spells” back in 1969, but if that’s something you need, you’ll find it in MW. The book does contain several warnings about how black magic often backfires, though that doesn’t deter him from spending over half the book giving out advice on how to manipulate and attack others.

A lot of the magick in Mastering Witchcraft was familiar to me, but the deities (and other higher powers) called upon by Huson were not. One of the most referenced “deities” in the book is the demon Vassago. That’s right I said demon, a Prince of Hell, and commander of 26 demonic legions. Perhaps he’s helpful, but that’s not something I want to play with. Gods I’m familiar with like Cernunnos felt warped and extremely different from how I experience them. Cernunnos is not a phallic god and certainly not related to Lucifer the light-bringer, just implying those things made me cringe a little bit. His overall approach to deity was perplexing. He mentions goddesses, gods, and demons but offers little insight into them. I’ve always thought that it’s important to know “who you are calling” before dialing someone up on the phone. That attitude goes for deity as well.

Towards the end of the book Huson makes a snide remark about Gerald Gardner and his followers, calling them “witch cultists” and writing that the word “witch embraces a far wider circle of people than merely the followers of Gerald Brosseau Gardner.” I don’t disagree with Huson there, but I did found it odd that if Huson is writing about a Witchcraft different from Gardner’s why he ended up quoting a lot of Gardnarian-type material. Mastering Witchcraft contains the “Blessed Be’s” (“blessed be thy feet that have brought thee in these ways”) and while he doesn’t use Valiente’s Charge of the Goddess he does quote the Aradia version of it. He might be dismissive of “witch cultists” but he was obviously influenced by them.

Despite all of my problems with Mastering Witchcraft there was a lot in it I actually liked. Huson writes about magick in a way that makes it feel alive and real. The spells in this book leap off the page and into the subconscious; this isn’t a cookbook. Even when Huson suggests doing something as repugnant as reciting The Lord’s Prayer backwards, his rationale for doing so makes perfect sense**. As much as I wanted to cast this book into a dusty corner of Modern Pagan History I couldn’t quite do it, there’s valuable information here, and Huson writes about it with style and substance. 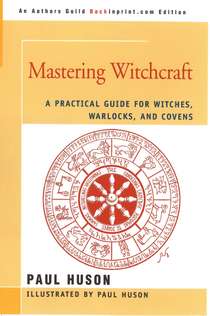 Is this book “Essential Pagan Reading?” Certainly not, and I doubt Huson would have thought of it as “Pagan” (as we use the term today) back in 1970. However, it is an important book. It’s a time capsule to a different time in our history, when demons and gods shared the same pages, and Christian and European folk magicks were often woven together. As an influence upon a whole generation it’s easy to see why it’s long been a true gateway to Paganism.

* A number I feel is far too unwieldy. If I were making up a list of essential books it would contain no more than ten titles, but this isn’t about my feelings of said list.

**Oddly a lot of the doom and gloom goes away in the last chapter of the book The Coven and How to Form One, and the witchcraft Huson writes about instantly becomes far more recognizable and less threatening.

***Saying something to signify a new beginning isn’t a bad thing, I just would have chosen something else to say.

August 21, 2012 Strange Days: T. Rexstacy and Marc Bolan of T. Rex
Recent Comments
0 | Leave a Comment
"Mabon's my favourite, I was surprised how low it was. I didn't expect it to ..."
Nekoshema Your Favorite Sabbats (Or Sabbats By ..."
"Love this! We often just call it "Pagan Thanksgiving" and have done with it. It's ..."
Seba O’Kiley Mabon: The Most Pressing Issue of ..."
"Well done, Jason!"
Angus McMahan Mabon: The Most Pressing Issue of ..."
"One thing I can't understand about Buckland's altar set-up is that he recommends a drinking ..."
Nicholas Chiazza Books Aging Poorly: Scott Cunningham’s “Wicca”
Browse Our Archives
Related posts from Raise the Horns