(This is one of my oldest articles at Patheos and was originally published on The Agora, refurbished a year later on Raise the Horns, and then updated a second time on March 9, 2017-jason)

Pagan holidays with an equivalent in the overculture often just feel bigger than the ones that don’t. It’s easy to get swept up in Yule or Samhain when everyone else is celebrating Christmas and Halloween-the decorations are essentially the same, and often times some of the bigger themes of each particular holiday. The Wiccan sabbat of Ostara (and as a “Pagan” holiday it’s celebrated far outside of Witchy circles too!) is one of those holidays that comes with an equivalent Christian celebration, Easter, and since the two basically share a name they are in many ways intertwined.

Many of the things I did as a kid to celebrate Easter have been moved over to my Ostara celebrations, and since I usually have nothing better to do on Easter morning I sometimes celebrate that holiday too! Any excuse for a celebration is fine by me, though I’ll admit that the overtly Pagan ones are usually far more fun.

Holidays are a great time of year for misinformation, and without fail every Ostara I run into some sort of crazy meme equating Easter with Ishtar and lots of other nonsense. What follows is my attempt to share factual information about Eostre, Easter, Ostara, Eggs, and Bunnies.

The word “Easter” is problematic for many reasons. In non-English speaking countries the commemoration of Jesus’s return from the dead is called something else entirely, we simply translate it as “Easter” out of laziness. In Greece for example, “Easter” is called “Lambros” which translates as “shining” or “bright.” This is problematic because many Pagans like to make the argument that Easter is a specifically pagan holiday, because of the alleged origins of the word Easter. According to the British historian Bede (673-735 CE) the word “Easter” comes from the name of a Germanic fertility goddess named Eostre, whose name was given to an entire month “Eostur-month,” and then eventually to one specific holiday occurring in that month, the one we now call Easter.

The problem with all of this is that the only source for the goddess Eostre is Bede. There aren’t any tales of Eostre throwing eggs to all of the good little Germanic pagans, or of her riding a giant rabbit, so it’s hard to say with certainty that she existed and is the source for the word “Easter.” While evidence of the historical Eostre is a bit scanty, there are some tantalizing ideas about where the goddess might have come from (assuming she was worshipped historically). Eostre shares a likely linguistic origin with various Indo-European goddesses of the dawn (like the Greek Eos for example). The questions then becomes whether the dawn was named after the deities in question, or if the deities were named after the rising sun. The word Easter then could be linked directly to a pagan goddess, or simply mean beginnings (1).

Anotehr candidate for the “historical Eostre” is a a localized goddess worshipped by the Anglo-Saxons in present day county Kent in Southeastern England. It’s in Kent where we see the oldest references to names similar to that of Eostre (Eastrgena appears in 788 CE). It’s recently been argued that perhaps she was a Germanic Matron Goddess . Linguist Philip Shaw (see his book Pagan Goddesses in the Early Germanic World) links a localized Eostre to the German Austriahenea, a matron goddess connected to the East. Shaw downplays the connection to “dawn” and focuses on linguistic evidence linking the two deities to the East (though the dawn connection might still exist even there since the sun rises in the East). If Eostre is indeed linked to goddesses like Austriahenea she might not even be a single goddess. Matron goddesses were often worshipped in triplicate.

In German Easter is called Ostern, and according to Jakob Grimm (yup, one of the fairy tale brothers) who was writing in the 1830’s the name derives from the German goddess Ostara. Sadly though, there’s less evidence of Ostara than there is of Eostre! It seems to be something Grimm pretty much concocted on his own for whatever reason.

A century and a half later an American Witch and poet named Aiden Kelly went looking for sabbat names more interesting than Spring Equinox, Summer Solstice, and Autumn Equinox. He ended up adopting Ostara for the Vernal Equinox and we’ve been using it for over 40 years now. It just feels right for the holiday, and considering the equinox’s associations with fertility, the rebirth of the Earth, and new beginnings it all fits in comfortably with the themes of the Christian Easter.

JESUS AS A DYING & RESURRECTING GOD

For many years I believed that the most pagan element of Easter was probably Jesus himself as a dying and resurrecting god. The term dying and resurrecting god was first popularized by the Scottish anthropologist Sir James Frazer (1854-1941) who wrote of such gods in his seminal work The Golden Bough. (Though popular today as a one volume book, the original Golden Bough was nearly the length of an encyclopedia set and included multiple volumes.) Frazer saw gods such as Dionysus, Tammuz, and Adonis as all being related to the Christian Jesus, and argued that such deities were caught up in a never-ending cycle of death (often involving crucifixion) and rebirth, often in tandem with the seasons of the Earth.

Unfortunately most modern day scholars of religion disagree with much of Frazer’s analysis, but that hasn’t stopped movies like Zeitgeist from repeating the ideas of Frazer and those who were inspired by him. The simple truth is that ancient pagan gods were never crucified and after dying they usually stayed dead, perhaps to rule the underworld in the case of a god like Osiris. There were certainly deities who went from the underworld back to the living world, but they didn’t use death as a vehicle to do so. (They are gods, why would they need to.)

But just because the myth of the dying and resurrecting god is a bit suspect doesn’t mean that the Christian Jesus wasn’t influenced by the deities of pagan antiquity, just the opposite. Second Temple Judaism didn’t believe in god-like figures rising from the grave, but pagans of the era certainly did! To be taken seriously as a deity Jesus had to match up with the other gods of the era miracle for miracle. I don’t think it’s honest to suggest that Jesus turned aside the grave because he was a vegetation god in the tradition of Tammuz, but to be seen as a figure as powerful as Dionysus or Isis he needed to claim some power over death. (If you are interested in this topic I’ve written extensively about it here.) 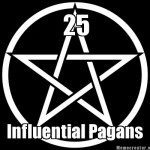 March 7, 2013
25 Most Influential People in the Birth of Modern Paganism (Top 5)
Next Post

March 14, 2013 Pope Watch 2013
Recent Comments
0 | Leave a Comment
"Mabon's my favourite. I don't like the heat and it's so hot by the time ..."
Nekoshema The Summer is for Pagans
"I get so frustrated with the current youthful fad of saying Witchcraft isn't a religion, ..."
Wolf Worship Is More Than Words & ..."
"Setting the price too low will actually hurt attendance.It signals that the event probably isn’t ..."
kenofken Festivals & Authors
"A full weekend of well programmed presentations should cost $300, bare minimum. $120 is peanuts. ..."
kenofken Festivals & Authors
Browse Our Archives
Related posts from Raise the Horns