The Gods They Are a Changing 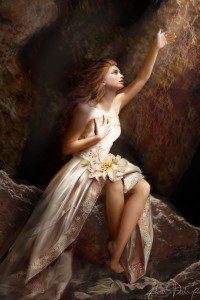 This past Saturday I celebrated Ostara with my local “open” group. We have a history of letting various covens, circles, and individuals present our rituals, so what we do is almost always different from sabbat to sabbat. This time around we had a collection of artists and school-teachers in charge of things and they put together a very “youth oriented” Ostara, so we had art projects, story-time, and a Beatles sing-a-long. All in all, it was a good time. It certainly wasn’t the most spiritual thing I’ve ever attended, but the energy good and I think nearly everyone had a good time.

During a part of the ritual the circle was treated to a story about the origin of the Easter Egg. It wasn’t a story grounded in traditional mythology, but it did involve a lot of familiar characters, most notably Pan and Persephone. At the start of the story “Rabbit” asks Pan what she should get Persephone for her annual “back to Earth” party. The story moves on from there to Rabbit decorating eggs, but I couldn’t get by the syrupy sweet portrayal of Pan. I kept wondering to myself, “shouldn’t Pan be humping Rabbit by now?” Trust me, I know there’s more to Pan than humping nymphs, people, sheep, and rabbits, but it was just so odd to see him all innocent and sweet in a children’s tale.

Forty-eight hours later I’m still processing “happy Pan,” and coming to the conclusion that I probably shouldn’t have been perplexed by it. I believe that the gods are constantly evolving, changing, and adapting to modern circumstances. That doesn’t mean Pan is out there chatting on a cell-phone and using Adult Friend Finder to set-up dates, but it does mean we shouldn’t be beholden to just one interpretation of deity. I think we’ve all been smacked over the head enough when it comes to Jesus and Paganism, but to tell someone they can’t worship the Nazarene because it fails to fit into a Pagan worldview means that you aren’t letting that deity form progress and grow. 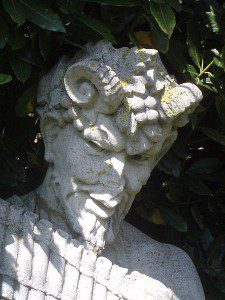 I’m a British Traditional Witch, and I practice Wicca. In that circle I tend to call upon deities like Pan, Dionysus, Aphrodite, and Ariadne. No one ever tells me that I’m misappropriating those deities, even though in Ancient Greece they weren’t worshipped in a Wiccan structure. (For many of us) the worship of those deities has progressed because we’ve allowed them to be introduced into new forms of worship and ritual structure. Worship of Dionysus is probably not as robust in 2013 as it was in the year 13, but it’s here, and it’s growing, and it’s adapting. If you are going to call out the worship of one particular deity, you pretty much have to call out the worship of every deity, because we are all worshipping those deities in ways that would have been foreign to their devotees two thousand years ago. Even Reconstructionists will usually admit that they aren’t doing things exactly like the ancients did in antiquity, and for good reason. Cultures change and grow, and deities that want to be worshipped long term have usually had to change alongside those cultures to stay relavent.

Pan and Dionysus are two of my favorite male deities, and are both good examples of how deity changes over the millennia. As much as I love Pan*, he was also portrayed as a rapist in a lot of ancient myths, and certainly wasn’t always a figure that you’d want to emulate. In the early 19th Century that image of Pan began to change; when I’m speaking about the history of Pan in public I sometimes refer to this as “smoothing off the rough edges.” Instead of simply chasing nymphs and trying to have his way with them, the god was reborn as a symbol of the eternal countryside, a bridge to wild places less travelled in the Modern Era. It was that softening of the god that led to Pan rescuing a baby otter in The Wind in the Willows (read the chapter Piper at the Gates of Dawn), or helping “Rabbit” honor Persephone at Ostara. 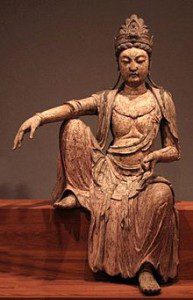 Ancient pagans were often comfortable worshipping multiple deities, but that comfort didn’t necessarily mean that those deities crossed over temple to temple. One could worship Mithra in the year 250 CE, but also leave a votive offering at a temple of Neptune in the hopes of having a safe ocean voyage. Many Modern Pagans take this idea a step farther by worshipping two unrelated gods in the same circle. I’ve been in rituals where the Celtic Cernunnos was called to stand next to the East Asian Kwan Yin (Guanyin). There’s obviously nothing linking the two, and while many of us might think such a pairing is a bad idea (me included), the circle I was in didn’t blow up and there were no negative repercussions. Apparently the gods were OK with it, or at least not upset enough to punish the Priest and Priestess who initiated the pairing. And there was energy in the circle that night, enough that I was convinced they had both shown up.

I don’t think most of us realize it, but worshipping ancient gods in a modern ritual setting (like the ritual structures in Wicca, many forms of Druidry, etc) either changes the gods or shows that the gods have changed for us (I think it’s probably a little bit of both). My perception of Dionysus would be different if I was worshipping him at a traditional temple with an amphitheater tacked onto the back of it; he’d still feel familiar (and I’d probably still call him “Big D”) but it wouldn’t be quite the same as the rites in the Temple Room at my house. The simple act of calling deities from two different, and un-overlapping, pantheons is a shift in energy that probably wouldn’t have occurred 2,500 yeas ago. 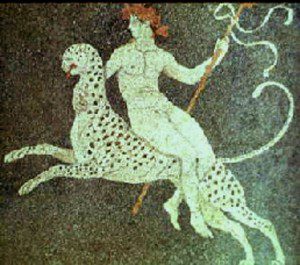 With all my heart I believe it’s important to know how the gods were worshipped two and three thousands years ago. If you want to understand a particular deity you have to know every side of that deity, and that includes the rough edges. The disciplines of history, anthropology, and archeology suggest that deity is never a truly completed picture, that new colors, textures, and perspectives are constantly being added. The Pan of the Arcadians was not quite the same Pan of the Athenians, and the Pan of Raise the Horns is probably different from both versions. I’m not the same person I was twenty years ago, but a small part of that person certainly lives inside of me. I think the gods are the same way, just substitute two thousand for twenty.

*I write about Pan more than other deities because “it’s what I know.” Besides, this blog is called Raise the Horns, not Ode to the Eternal Sun.