Passing on the Faith? Probably Not

Passing on the Faith? Probably Not August 12, 2013 Jason Mankey

(Patheos is running a special feature this month about “Passing on the Faith.” As I’m a sucker for bandwagons I thought I’d contribute in my own contrary way. For the record, I have no children, just cats at the present moment, so feel free to tell me I don’t know what I’m writing about.)

Despite being rather religious myself, my Father was never one for making my brother and I attend (Christian) church. Our family was “Christian” of course, but outside of Easter and Christmas it wasn’t all that important in the house the three of us shared. I think he was happy enough just to sleep in on Sunday, no need to get the kids ready for church, and if we wanted to visit church we were free to help ourselves to the “church bus” that rambled through our neighborhood every weekend.

Spending time at my Grandparents’ house was an all together different matter. While my Grandfather was always somehow excused from Sunday church services to play golf, such exemptions did not apply to my brother and I. If we were staying with Grandma going to Sunday School was part of the deal. She wasn’t a hard-core Bible pusher, but it pleased her greatly to see us involved at her local church. I remember her sending me off to church one morning with my Father’s old Bible tucked under my arm and this look of complete serenity upon her face.

In later years my step-mother began expecting my brothers and I (gaining a step-mom also meant gaining some extra brothers) to attend church. Eventually the expectation began to be both Sunday School and Sunday Worship Service, no exceptions. Oddly, my step-mother also mocked and ridiculed me for being involved at my local church. Apparently being a no-drug using, non-drinking, non-smoking virgin at 17 made me a bad Christian in her world. What I’m trying to get at here is that my Grandmother and even my step-mom (in her own weird way) were attempting to “pass on” the Christian faith to my brothers and I.

When I was younger I just assumed that was how the world works. If you are a kid you go to your parent’s church, it’s as simple as that. As I got older my perspective evolved, and while I never stopped going to church during my teenage years, I began to feel that religion should be a choice and a not an heirloom to be handed down from generation to generation. I grew up in a rather wishy-washy Methodist Church. The sermons there lacked fire and brimstone, and the word “evangelical” was foreign to my ears. It was a “kinder, gentler” sort of Christian experience. That began to change when my church went through some personnel turnover and we ended up with a born-again Baptist as our Youth Group Director. Suddenly that kinder, gentler Christian experience was out; replaced with the chant of “Onward Christian Soldiers” and groups of kids coercing classmates “to accept Jesus” in what looked like football huddles. I was a Christian at the time and it creeped me out. Religion suddenly seemed less like a choice and more like an exercise in extreme peer-pressure. 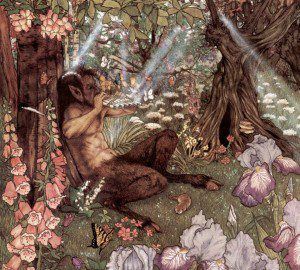 When I look back at my own Christian experience I’ve begun to realize that I never “knew Jesus” the way I know the gods of Modern Paganism. What I knew then were the expectations others had of what a relationship with Jesus should be like. As a young person who felt socially obligated to go to church I was never able to cultivate a relationship with the Guy from Galilee because it was all something that someone else planted. Paganism has taught me what real interaction with deity is like because that interaction has been entirely organic. No one told me I should experience a “walk with Pan,” it was something I got caught up in all on my own. If people are constantly telling you what deity to worship and how that deity perceives the universe it becomes that much harder to actually hear deity, any deity. Was Jesus actually answering me or was I simply repeating everything taught to me in Sunday School?

“Passing on the faith” is not a practice I’m a fan of, obviously. There are many different religions out there and I’ve always thought it was limiting to the concepts of “God” and deity to proclaim one pathway better than the other. I’ve always assumed that since people all work differently that there were many different roads that all lead (eventually) to the same place. Indoctrinating children to believe a certain way has always struck me as the coward’s way out. It’s almost like admitting “I’m not sure my faith is actually powerful enough to attract an adult, so I’ll make sure my kid starts believing in it at a young age.” If a person is meant to be a follower of Pan or Jesus they should probably figure that out on their own instead of being pushed into it.

Of course this all leads up to whether or not I think we (as Pagans) should raise our children as Pagans. For the record I don’t have any children, but we are thinking that’s a step we might take next year so we’ve begun talking about how we might raise our little cute hypothetical. Could we hide our Paganism from a potential child? Absolutely not, and the moment our kid figured out how to use Google the jig would be up anyhow (and when does that happen now? age four?), but I can’t imagine raising a child with preconceived notions of deity. I’d certainly want to teach my children to love the Earth and to respect the change of the seasons, but I’m not sure I’d instruct them to pray to the Horned God before going to bed every night, that decision would be their own. (Of course I’d read Greek myths to them while in the womb, but that’s not indoctrination is it?)

Would I love it if my future child told me they wanted to be a British Traditional Witch and inherit Raise the Horns? Sure, but even more than carrying on my faith I’d much rather see my future child share my values. It’s more important to me that whatever spawn I create cares about the Earth and their neighbors and is generally respectful of those that deserve respect. You don’t need to be a Witch to do that. 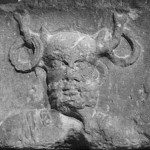