(This is a new frontier on Raise the Horns, a book excerpt! After reading Courtney Weber’s fabulous new book Brigid I was asked by the folks at Red Wheel/Weiser if I’d be interested in running an excerpt from it. I of course said yes, and threw in a quick review of the book for good measure. I don’t run things on RtH unless I like them, and I liked Weber’s book.) 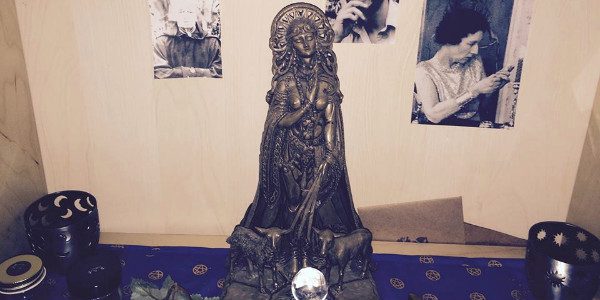 As Christianity spread across Europe, the Gods of indigenous faiths were either disregarded by the Church or absorbed into folklore. Some were demoted to demons in the new Christian lore. Others were transformed into heroes of a legendary past where they continued to be revered with magick and significance. Still others, particularly those of paramount importance, were adopted as saints. The role of beloved saint was the next chapter for Brigid.

The idea of a beloved God or Goddess of ancient Pagan history turning into a saint can be a painful one for those who love old religions and Goddess worship. For many, the movement from God to saint may seem a demotion, although those who have loved and honored the saints would likely disagree. Particularly in the case of Brigid, the new saint lost few, if any, of her Goddess characteristics and was revered with power and prestige in Ireland on a level only rivaled by St. Patrick.

St. Brigid was identified with the Christian Mother-Goddess figure of Mary, as “Mary of the Gaels,” or sometimes “the Foster-Mother of Christ,” and in some stories as Mary’s midwife. With the exception of the archangels, very few saints enjoy such inclusion with the two most important figures in Catholic Christianity. Even so, St. Brigid is an unsaintly character, one known for screeching across battlefields or flagrant defiance against Church leaders.

St. Brigid is both historical figure and character of folklore and shared more than a name with her Pagan Goddess counterpart. It is through St. Brigid that the clearest glimpse into Brigid the Goddess can be found. The great cathedral of St. Brigid in Kildare, Ireland is believed to have been founded by the saint herself. It is widely accepted that the church was built upon an even older Pagan shrine, where a perpetual fire was kept in honor of the Goddess Brigid. Like the legacy of Brig, Brigid was probably a title rather than a name for a leading Druidess the Brig or Great Lady of Kildare. This Brigid oversaw the shrine’s care, later leading its conversion from Pagan to Catholic. Perhaps the crafty leader saw a way to preserve veneration of the sacred sites under a seemingly inevitable Christian transformation and coordinated it on her own terms.

The story goes that the Druidess-nun was consecrated as Bishop of Kildare by accident. According to legend, the Bishop Ibor, performing the liturgical rite, read from the wrong passage and gave Brigid a status of power unheard of for women, even in contemporary Catholicism. If the story is true, it was almost certainly not an accident. Druidesses commonly held high posts, although nuns did not. To keep the respected Druidess in a powerful position would have been to the Church’s advantage, strengthening alliances with the local population. After her death, she became St. Brigid. Even in the new faith, Brigid remained exalted.

Brigid by Courtney Weber (a review) 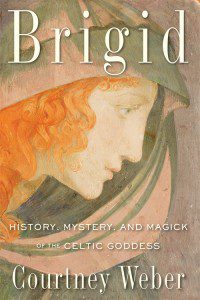 When this book showed up on my doorstep two weeks I was extremely dubious. I’m a big lover of Brigid and have very little use for inaccurate, revisionist histories that exaggerate her influence. I’m happy to report that about twenty pages into Courtney Weber’s Brigid: History, Mystery, and Magick of the Celtic Goddess my skepticism vanished and I got caught up in a gorgeous history and ode to my favorite Irish deity. I say “ode” because this isn’t just a history it’s a journey with the goddess herself; a journey through ritual, meditation and magic.

Weber does a masterful job with the rather complicated history of Brigid, summing up her various incarnations as a Catholic Saint, (Contemporary/and ancient) Pagan goddess, and as one of the loa in Voudun. I’m often rather skeptical of the idea of Brigid as a “universal Celtic goddess” and was happy to see Weber offer various points of view on her history. If there’s one quibble I have though, it’s a lack of footnotes. In fairness though, this is not a book for scholars, it’s for lovers of the goddess, and I doubt many of them will miss them as much as I did.

If your fan of Brigid this is the book you’ve been waiting for. It’s factual, practical, and spiritual. There’s some great re-tellings of classic myths, and new avenues for magical exploration. I’m still kind of in shock I liked it as much as I did! -jason mankey

This character entered lore with the same ferocity and warriorship found in the Pagan Goddess, as well as relentless work against poverty. St. Brigid was known for giving anything she possibly could to those in need. After her death, this important lady was buried in the church of Kildare in an elaborate coffin and reportedly surrounded by treasures and gifts from the community. Shortly thereafter, grave robbers stripped the tomb of is riches. Although a sad crime when we consider what sorts of treasures history has lost, it is true to the legacy of the saint who, even in death, continued to give all that she had to those in need.

St. Brigid was sometimes said to have had a woman friend or fellow nun in the convent named Darlughdacha, the literal translation of which means “Daughter of the God Lugh,” who herself became the leader of the Kildare abbey upon Brigid’s death. Other stories say that Brigid was actually Darlughdacha and a daughter of the God Lugh, herself, Brigid being only her title. Brigid and Darlughdacha reportedly shared a bed each night. One day, Brigid caught Darlughdacha gazing at a passing warrior. Brigid demanded she walk in shoes packed with red-hot coals as penance—either in sanctity of her convent vows of chastity or possibly to subdue Brigid’s personal jealousy, indicating that the two were lovers. 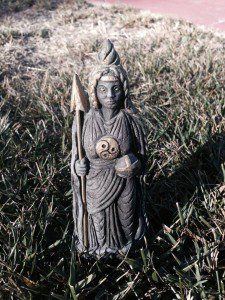 The coals and the rage are among many, many other traits that resonate far more with a Pagan Fire and War Goddess than a standard saint. Additionally, the Church at Kildare has lost few of its Pagan roots. Kildare (cill dara) means “Church of the Oak Tree.” Oak is not a tree regularly honored in Christian lore, nor are perpetual fires commonly dedicated to Catholic saints, yet both are prominent in the reverence of St. Brigid. The gap between the Pagan and Christian rites of Brigid are quite small indeed.

St. Brigid formed an important link in the religious and spiritual life of the first Irish Catholics in bridging their ancestral religion with the one newly imported. St. Brigid was known for her miracles of healing, care for animals—particularly livestock that produced milk, as did her Pagan incarnation—dedication to the poor, and fighting oppressive forces, including (and sometimes especially) Church leaders. St. Brigid cannot be cast off as a modification of the Goddess. Rather, the canonization of Brigid as a Catholic saint preserved her and stands as a testimony of the Goddess’s enduring importance.

(Reprinted with permission from Red Wheel/Weiser, LLC., Brigid by Courtney Weber is available wherever books or ebooks are sold or directly from the publisher at 1-800-423-7087 or www.redwheelweiser.com. It’s available at this link on Amazon.com in the United States.) 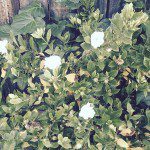 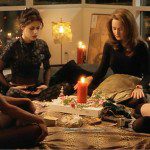 May 6, 2015 "The Craft" Didn't Change Everything
Recent Comments
0 | Leave a Comment
"I get so frustrated with the current youthful fad of saying Witchcraft isn't a religion, ..."
Wolf Worship Is More Than Words & ..."
"Setting the price too low will actually hurt attendance.It signals that the event probably isn’t ..."
kenofken Festivals & Authors
"A full weekend of well programmed presentations should cost $300, bare minimum. $120 is peanuts. ..."
kenofken Festivals & Authors
"Thank you for the shout out, Jason. It is a challenging path to walk because, ..."
Christian Day Festivals & Authors
Browse Our Archives
Related posts from Raise the Horns