Earlier this month the popular website Etsy changed what can be sold there. Of particular interest to the Pagan (and magickal) Community is this one specific change:

Can I Sell Services on Etsy?:

Any metaphysical service that promises or suggests it will effect a physical change (e.g., weight loss) or other outcome (e.g., love, revenge) is not allowed, even if it delivers a tangible item.

Ebay adopted a similar ban in 2012 which is one of the reasons it’s become so popular on Etsy.

Upon reading this news I assumed that as long as the disclaimer “for entertainment purposes only” was included with any spell-kit things would be kosher. This is apparently not the case as the Daily Dot reported the other day:

” . . . . under Etsy’s previous rules, spells and hexes were allowed to be sold, as long as they fit two criteria: They didn’t guarantee results, and they produced something tangible. So you could sell a tarot reading as long as it came with, say, a digital download, or a candle that could be used for casting spells, as long as you didn’t guarantee that the spell would actually work. Earlier this year, for instance, I bought a sex spell off Etsy, which came with both photographs of the spell being cast, and a disclaimer that no spell is guaranteed to work.”

This ban goes far beyond candles and spells, it also means that the magical correspondences of herbs, stones, and oils can’t be listed on the site. As one seller pointed out on an Etsy forum:

“Many people sell crystal jewelry or plain crystals describing the believed properties of these gemstones – for example, according to some sets of beliefs and traditions, a certain crystal can be ‘protective’, ‘grounding’ or something of that matter. It’s a wide market including very popular sellers and items – part of their business’ story and the charm of their items are these unphysical attributes linked to certain gemstones. Some individual sellers have now been attacked for describing these things and had their items removed – a majority of these sellers are still there. Is Etsy really going to ban all of these items one by one because the shop owners have described their items in this way, even when they do NOT promise a physical change for a person (ie. curing an illness) ?

How about an essential oil blend that’s described as ‘balancing your moon cycle’ or ‘soothing menstrual cycle’? Purchasing an item like this is because the customer shares beliefs on traditional herbalism and witchcraft with the seller, and I find the thought of an item like this being banned incredibly sad. There are people who sell essential oil blends only based on their scent, but people who purchase essential oils often enjoy them because of the beliefs in herbalism or other such traditions. This too is a wide market, and the sellers seem to have only happy customers.

Where do you really draw a line? Is a good luck charm allowed, but a protective talisman is not?”

Several sellers have had their Etsy stores suspended without warning while others have received notices. The majority of us probably don’t buy spellwork online, but many of the sellers at Etsy are family and friends, and they are having their lives upended. Some have suggested that the recent “no spell” policy is related to Etsy going public last April, other have suggested that there might be some religious discrimination at play. More from the Daily Dot:

“While these theories are all sound, many metaphysical sellers believe that Etsy has a cultural bias against their goods. One forum user compared the sale of crystals that could be used in meditative rituals to the sale of a rosary or a cross. Both items represent spirituality, but neither make the claim that they will heal your ills or help you speak to God.

‘Etsy seems to be only targeting those items of a pagan/occult nature while allowing items of certain faiths traditionally used for protection like St. Christopher medals, to still be marketed,” said another vendor in an email. “Personally I think it’s probably unintended ignorance and failure to consider and think through what banning all spiritual, energetic and magickal claims will really mean.’”

What can you do? What can we do? Signing this petition to Etsy is probably a good first step. For more about this story please read the Daily Dot article I’ve linked to and check out the Etsy forum. Hopefully we can get this changed. 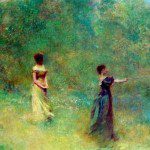 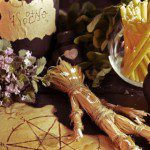