The Trouble With 101 Books

“What book would you recommend for a beginning Pagan?”

I hate that questions these days because I no longer have a good answer. I’m about as likely to recommend online sites these days as I am books. (I’ll admit to having a certain bias for Patheos Pagan, but in fairness we do provide a pretty good overview beyond Wicca.)

To some extent I think “what we recommend” revolves around what we initially read, and for some of us that means materials originally published twenty or even forty years ago. Since most Witches (and other Pagans) don’t dip back into the “101” waters after their first couple of years, the only things they really know to recommend are the books they read when they were starting out. The problem there is that we often end up very far from where we started, and sometimes the things we loved when we were younger don’t hold up particularly well.

I get in a lot of trouble on open Facebook groups because I don’t recommend Margot Adler’s Drawing Down the Moon very often. For the record, Drawing Down the Moon is a tremendous book, and it’s one I consult with some frequency when writing about history. I think it’s a book every Witch should read read at some point in their lives, but it’s not a very accurate representation of the Craft in 2015. As a history book it’s invaluable, but it’s not a contemporary accounting of Modern Witchcraft.

But I have a lot of friends who always recommend DDtM right out of the starting gate, and I suspect it’s mostly because it’s what they read forty years ago. Their friends are in those pages and Adler’s experiences while writing the book are ones that resonate with them. There’s nothing wrong with feeling that way, but nearly everything about Paganism has changed since 1979. We communicate differently, we know more about our origins, our communities are larger and more diverse, and we’ve all been exposed to things that didn’t even exist when Adler first released her book. As I said, it’s a book that should be read, and it’s a book I treasure, but it’s not a 101 book anymore (if it ever was).

There are other books from the 1970’s that suffer from some of the same problems as DDtM. Paul Huson’s Matering Witchcraft is a fantastic occult-primer and a book I find myself liking more and more as I get older. But its Witchcraft is different from the general expectation of today. Again, I’m not saying that people shouldn’t read the book, only that it probably makes for better “second level” work.

This article isn’t simply a condemnation of the things Baby Boomers recommend, because my generation (Gen X) is just as bad. Twenty years ago I loved Raymond Buckland’s Complete Book of Witchcraft. It had all of this amazing occult information in it and it was written in this very clear and concise way. Re-reading it almost two years ago I left with an entirely different opinion.

I’m not going to rehash everything I disagree with in 2015, but there’s a section of the book that basically says every deity is the same deity and that one can just insert names willy-nilly during ritual. Words can’t do justice to how much I disagree with this idea, and yet at the time this didn’t bother me in the least. Today I’m rather hesitant to recommend Bucky’s Big Blue Book because of such passages.

Cunningham’s Wicca A Guide For the Solitary Practitioner suffers from similar issues, and there are also ritual bits in there that I don’t see used by very many Witches. Again, neither of these books are bad, I just don’t love them as much as I did in my youth. The problem here when writing about these things honestly, is that people will sometimes completely flip-out when coming across a negative comment about the book that brought them into the Craft.

Our perceptions of certain authors also cloud the things we recommend. A great many people loathe Teen Witch by Silver Ravenwolf, and as a result are wary of all her books. However To Ride a Silver Broomstick is freaking fabulous. The spells are strong, the theology is surprisingly good, and Silver is just a fantastic writer. But some people can’t get past her other books, or whatever their other issues are with her. When the Huffington Post listed 27 essential Pagan books Broomstick didn’t make the cut, an absolute travesty considering some of the other books on the list. (And I’m fully aware that such statements speak to my own personal biases!)

One of my all time favorite books is People of the Earth: The New Pagans Speak Out by Ellen Everett Hopman and Lawrence Bond (perhaps better known by its alternate title Being a Pagan: Druids, Wiccans, and Witches Today), and I like it so much because it was my first real over-view of Modern Paganism contemporary to my early Pagan experiences. (In other words, it was more representative of a world with AIDS, college age Pagans, and various other things.) But it was first released in 1995, before blogs were really a thing, and while much of it holds up, it’s no longer really representative of our Paganism today. That doesn’t mean no one should ever read it or that it lacks any value, just that it’s no longer what it once was.

So back to the original question: “What book would you recommend for a beginning Pagan?” The answer remains that I’m not sure, but I like to think I’d do my best to present several resources that provide both a contemporary and backwards glance at Modern Paganism. When I first started out no one gave me much in the way of advice or book recommendations. Perhaps the best strategy is to simply encourage people to read whatever they want and be there to answer any questions along the way. 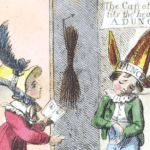 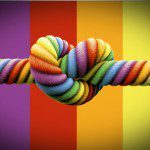 November 8, 2015 Nope, Just Another Wedding
Recent Comments
0 | Leave a Comment
Browse Our Archives
get the latest from
Raise the Horns
Sign up for our newsletter
Related posts from Raise the Horns

Foundation: Feet Planted. Eyes Focused. Intention Strong.
Foundation is important. Our paths include principles, rituals, or beliefs that hold...
view all Pagan blogs
What Are Your Thoughts?leave a comment
Copyright 2008-2020, Patheos. All rights reserved.