I’ve written a lot of history articles on this page over the years. The only time the names Gavin and Yvonne Frost have come up was in an article on the margins of Pagan history. Back then I wrote these words:

“Apart from organizations there are people I don’t know how to write about in Paganism. Gavin and Yvonne Frost are two people who claim to have sold an extraordinary number of books back in the 1970’s, but I don’t know that for sure. Their version of “Wicca” was also radically different from the conventional standard during that period. They were certainly published by a mainstream press back then and probably had a lot of people sign up for their correspondence courses, but I’m not sure what their legacy actually is. I’ve met a lot of nice Witches who have studied with the Frosts but Gavin and Yvonne don’t show up in Hutton’s Triumph of the Moon and only make a very fleeting appearance in Clifton’s Hidden Children of the Goddess. Today they are probably more well known for inciting controversy than anything they’ve written. If you like them you probably think they are important, if you don’t like them you probably think they exist on the margins. Overall I’m guessing most people out there know almost nothing about them.”

In the wake of Gavin’s passing that’s still pretty much how I think of them. I’ve never thought of them as especially influential when it comes to the history of Modern Witchcraft (and by extension Paganism), but I’ve met some of their students over the years who were extremely nice and competent Witches. I’ve also met their daughter who is a lovely woman. I feel for those upset over the loss of a father, grandfather, and teacher.

I’ve also interacted with both Gavin and Yvonne Frost on a number of occasions. Anytime I did a workshop on Wiccan History at a festival we all were attending they were there. The Frosts were generally attentive and respectful, though Gavin always liked to get in his opinion on the history of Witchcraft. The first time that happened he brought up Sybil Leek’s alleged interactions with Aleister Crowley, a dubious piece of “history” to say the least. The last time I interacted with Gavin he called me out on getting a date wrong and made sure to add just how many copies The Witch’s Bible had sold. (He claimed it was a spectacular amount.)

Usually old best sellers are easy to come across at yard sales or online, and generally don’t cost more than a couple of dollars. The paperback version of The Witch’s Bible from 1976 (the hardcover version was printed in 1972) starts at about fifty bucks, which leads me to believe it was never that big of a seller back in the day! I’ve also never physically seen a copy of it. It’s far from a standard text, or even a second or third level one. It exists in a strange little bubble, and was probably purchased by more cowans (a word that means “non-Witch”) than practitioners.

The first time I came across the Frosts in print was in Raymond Buckland’s Complete Book of Witchcraft (or Uncle Bucky’s Big Blue Book) which provided less than a ringing endorsement:

One of the things that has always bothered me about the Frosts “Witchcraft” is that it originally did not look anything like Wiccan-Witchcraft. I’m well aware that “witchcraft” is a word with several meanings but Gavin and Yvonne specifically called their teaching vehicle the “Church and School of Wicca.” On the dedication page of 1976’s The Magic of Power of Witchcraft they add the words “(that is, of Witchcraft)” after the name of their school and church. Definitions of Wiccan-Witchcraft vary, but there are certain expectations when the word Wicca is used and early version’s of Frosts practice did not meet those expectations (some sort of goddess I think is rather important).

The rather unorthodox nature of the Frosts practice is best articulated in Margot Adler’s Drawing Down the Moon (originally 1979, my copy is the 1986 revised edition), and while the whole three pages is worth quoting I’ll just share a couple of highlights:

“It is debatable whether the school of Wicca should be included in this book about Neo-Paganism and about Wicca as a branch of Neo-Paganism. The School of Wicca does not consider itself ‘Pagan,’ and Gavin and Yvonne Frost, who head it, define Witchcraft as a monotheistic religion.” (page 125)

On pages 126 and 127 Adler (here abbreviated M.A., as in the book) shares a brief snippet of conversation with Gavin and Yvonne:

“M.A.: You both say you are not Pagans, is that true?
Gavin: Absolutely!
Yvonne: I do not consider myself a Pagan. I do not worship any nature deity. I reach upward towards the unnameable which has no gender.
M.A.: How do you define ‘Pagan’?
Gavin: A Pagan is someone who worships a nature spirit.
Yvonne: Or a name, finite deity.
M.A.: Or many of them.
Yvonne: I say there is one deity, without gender.

” . . . But most of them have come to feel that the Frosts are simply practicing a different religion, and only wish they would stop calling it Wicca.” (page 128)

In fairness I should also point out that Adler writes that “In person, the Frosts are delightful.” And before her untimely passing I saw her share a stage with them during a panel discussion where she shared some positive anecdote about being proud to call one’s self a Witch (thought I wouldn’t have categorized it as an endorsement of anything).

Many suns ago I attended a workshop by the Frosts with the title “Gavin and Yvonne Tell All.” It was Wiccan history through the lens of Gavin and Yvonne and didn’t resemble the history that has become so special to me over the last forty years. Perhaps the most surprising part was when Gavin tried to take credit for coming up with the word “Wicca” back in the late 1960’s in St. Louis Missouri, even though the word “Wica” first appeared in the writings of Gerald Gardner back in the 1950’s, and was being used (with the extra “c”) by others in Britain by the early to mid-1960’s as a word to describe Gardner’s Witch religion. (Humorously, Gavin suggested that he had wanted to call Wicca, Wiccae, which is the feminine spelling of the word.) I, along with a few friends, tried to ask him about Gardner’s use of the word but our questions and pleading were politely ignored.

Towards the end of that workshop Gavin handed out a piece of paper claiming historical precedent for certain sexual rites involving minors*. It’s an idea first articulated in the Frosts’s The Witch’s Bible and one they never quite walked away from. This was (another) instance where they doubled down on the idea and I remember being horrified when handed that piece of paper and reading it. Just writing about it revolts me, and I bet most of you reading this are bothered by it too.

Over the last ten years the Frosts have probably became more well known for controversy than their “school” or practice, and I’ve always had mixed feelings about that. On the one hand I’ve never been a fan or supporter of theirs, but I also think most of the “controversy” about them has kept them relevant far past their expiration date. I’m not saying we should ignore problems or awful disgusting rituals and statements, but I think the Frosts were given a second life that they didn’t earn due to some of the outrage directed at them.

I’m no defender of Gavin Frost (as I think this article suggests) but he’s also never to my knowledge been charged or convicted of a crime. I’m hesitant to yell “Pedophile!” at the top of my lungs when encountering a book passage I vehemently disagree with. Wrong? Perverse? Disgusting? Not Wicca! All of those things and more, and I’m not forgiving the passage, but I also don’t know enough about Gavin to call him something as reprehensible as a pedophile.

Winston Churchill’s quote “history is written by the victors” is especially apt when it comes to the legacy of Gavin Frost. Today’s Pagandom has no space for some of the rituals in the Frosts’s The Witch’s Bible, and Wiccan history won’t be kind to a philosophy that once looked nothing like Wiccan-Witchcraft. (I’m aware that it changed eventually, but I have no way of knowing if that change was sincere, or a reaction to being on the wrong side of history.) As I wrote in 2014 the Frosts “legacy” when it comes to Witchcraft exists very much on the margins, and will likely fade entirely over the next several decades.

*I’m not going to elaborate on that any further here. I’m sure if you are reading this you know how to perform a Google search if you are curious. 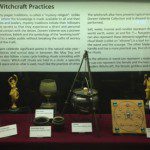 September 12, 2016
An American in Britain: Doreen Valiente Pilgrimage
Next Post 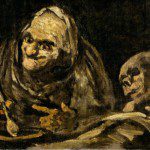 September 20, 2016 Mirth & Reverence: You Can Laugh During Ritual
Recent Comments
0 | Leave a Comment
Browse Our Archives
Related posts from Raise the Horns