This time of year I often hear people lamenting the lack of a “traditional” Christmas, so I thought I’d help out. Let’s forget about how Christmas was celebrated 100 years ago, let’s go back to the real traditions and celebration. So get out your wine glass, snuggle up and get naked with the one you love or someone you like, and prepare to release your inner Pagan! It’s Christmas time!

With the possible exceptions of sun worship and decorating with winter greenery, the oldest and longest lasting Holiday tradition is that of Misrule. Often this idea was expressed through an appointed or elected Lord of Misrule to proceed over the Christmas-time proceedings, but the idea behind Misrule goes much further than that. Misrule was about upsetting the social order. While today’s Christmas celebrations feel rather “establishment,” earlier celebrations were something else entirely.

Misrule’s origins lie in the celebration of the Roman Saturnalia, which occurred for about a week in mid-December. In a dialogue written in honor of the holiday Lucian of Samosota wrote: “Let every man be treated equal, slave and freeman, poor and rich.” He later goes further with a more elaborate explanation of the holiday:

“Each man shall take the couch where he happens to be. Rank, family, or wealth shall have little influenced on privilege [that is, on a man’s place at the table].

All shall drink of the same wine, and neither stomach trouble nor headache shall give the rich man an excuse for being the only one to drink better quality.

All shall have their meat on equal terms. The waiters shall not show favor to anyone . . . Neither are large portions to be placed before one and tiny ones before another, nor a ham for one and a pig’s jaw for another-all must be treated equally . . .

When a rich man gives a banquet to his servants, his friends shall aid him in waiting on them.” (1)

During Saturnalia slave-owners often waited on their slaves, and presiding over this enterprise was a Mock King who had the power to (at least according to Lucian):

” . . not only escape silly orders but you can give them yourself, telling one man to shout out something disgraceful about himself, another to dance naked, pick up the flute-girl, and carry her three times around the house.” (2)

After Christmas forcefully supplanted the pagan celebrations of Saturnalia, Yule, and the January Kalends, mock kings and the tradition of misrule were carried directly into the new holiday, where they’ve mostly stayed over the last 1600 years in various forms.

During the medieval period Lords of Misrule in royal courts presided over merriment (and often subversion) from All Hallow’s Eve until Candlemass (February 2), in which they oversaw “fine and subtle disguisings, masks, and mummeries, with playing at cards four counters, nails, and points, in every house, more for pastime than for gain.” (3) Violence was known to erupt over the election of the Lord of Misrule, resulting in the tradition gradually declining in popularity during the Seventeenth Century, though it would continue to exist in various forms.

Lords of Misrule weren’t confined to royal courts. In Lincolnshire England in 1637 a random crowd of revelers elected their own Lord of Misrule who was promptly “married off” by a fellow celebrant dressed as a minister. Though the couple were in no way married (and it seems unlikely that they were even in a relationship) they did consummate their vows later that evening. Such events were not isolated either, and were among the reasons Puritans so disliked the Holiday season. In 1712 Increase Mather wrote:

“The Feast of Christ’s nativity is spent in Reveling, Dicing, Carding, Masking, and in all Licentious Liberty . . . by Mad Mirth, by long Eating, by hard Drinking, by lewd Gaming, by rude Reveling.” (4)

Hard drinking was not an isolated event either. It was part and parcel of the day, and was integral to Christmas celebrations up until about the middle of the Nineteenth Century. Drinking and Misrule were even a part of Christmas celebrations in the American South. Slave owners often waited on their “servants” while all indulged in strong drink. Writing in The Battle for Christmas Stephen Nissenbaum puts it this way:

“But Christmas meant carnival in the antebellum South. As early as 1823 a rural white Southerner attacked the Christmas season for being a ‘general scene of of dissipation and ideleness’ Some folks spent their time making ‘rough jokes.’ ‘Apprentice boys and little negroes’ fired guns and crackers (fireworks).’ And everyone ‘parents, children, servants, old, young, white, black, and yellow’-drank hard. ‘And if you inquire what it is all for, no early reason is assigned . . . ., except this, ‘Why man! It is Christmas!”” (5)

The tradition of wassailing is a direct continuation of Misrule and is still practiced today in some parts of England. Today we tend to think of wassail as either a drink or something akin to Christmas caroling, but it’s original purpose was to upset the apple cart while getting drunk in the process. Wassailers would visit the homes of the rich and powerful during the Holiday season demanding food and (especially) drink, with the powerful serving the less prosperous, just as it was at Saturnalia. Wassailing served as a kind social safety valve, allowing the less powerful to gain the upper-hand over the nobility and/or their employers, at least for a few days.

Refusal to meet the demands of the wassailers was very rarely met with violence (at least initially) but often resulted in vandalism when the needs of the wassailers were not met. The tradition began to fade from public view beginning in the Nineteenth Century for a variety of social reasons. Part of that was because the tradition its self was becoming more violent, with the newly emerging middle class declining to play along with the less fortunate, and the wassailers themselves refusing to accept the wishes of those who wished to opt out. (And it’s hard to keep a tradition down, Halloween’s “trick or treat” is a direct continuation of wassailing/Misrule customs.)

The emergence of the “stay at home children’s holiday” that Christmas has morphed into over the last two centuries can be directly linked to efforts to curtail misrule and wassailing traditions. Instead of angry packs of young men demanding cider and beer Christmas became about hearth and home, though Misrule never quite disappeared completely. Instead of wassail employers implemented the “Christmas bonus” and drunken rowdiness was moved to New Year’s Eve and to a lesser extent the office Christmas party. Even the idea of charity during the Winter Holidays can be traced directly back to Misrule.

1. Christmas: A Candid History by Bruce David Forbes, University of California Press, 2007 pages 8-9. This is a fabulous quick and easy read on the real history of Christmas.
2. Forbes, page 9. Forbes so effectively summarizes these practices that it’s hard not to just quote him directly.
3. The Encyclopedia of Christmas by Gerry Bowler, McClelland & Stewart Publishers, 2000, page 134.
4. The Battle for Christmas by Stephen Nissenbaum, Vintage Books (Random House), 1996, pages 8-9. Both the Lincolnshire anecdote and the Mather quote come from Nissenbaum. This is a great book.
5. Nissenbaum page 261.

December 12, 2016
Oh Lighten Up Christians, Christmas Is Kinda Sort of Pagan
Next Post 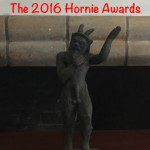 December 28, 2016 The 2016 Hornie Awards
Recent Comments
0 | Leave a Comment
"Mabon's my favourite, I was surprised how low it was. I didn't expect it to ..."
Nekoshema Your Favorite Sabbats (Or Sabbats By ..."
"Love this! We often just call it "Pagan Thanksgiving" and have done with it. It's ..."
Seba O’Kiley Mabon: The Most Pressing Issue of ..."
"Well done, Jason!"
Angus McMahan Mabon: The Most Pressing Issue of ..."
"One thing I can't understand about Buckland's altar set-up is that he recommends a drinking ..."
Nicholas Chiazza Books Aging Poorly: Scott Cunningham’s “Wicca”
Browse Our Archives
Related posts from Raise the Horns