This Friday night my coven will be celebrating its fifth birthday. Five years may not sound like a lot of time, but it’s by far the longest coven experience I’ve ever had in my 20-plus years of Witchcraft. Sure, I’ve been a part of several communities where we’ve shared a few sabbats over the years and numerous life events, but never a coven.

Many years ago I read something that theorized that the average lifespan of a coven was about 18 months. I have no idea where that number came from, but judging from personal experience it sounded about right. For whatever reason, my earliest covens simply didn’t last very long. As soon as we got a practice up and running someone (or Ari and I) would move away, or personal conflicts amongst members got in the way of everything. Covens for all sorts of reasons rise and fall, though some can be especially long lasting.

Gerald Gardner’s original coven (outside of the New Forest), Bricket Wood, has been meeting continuously since the late 1940’s, which means it’s almost seventy years old! Obviously membership and leadership have changed a great deal over those decades, but the coven survived. In my local area there’s a women’s-only circle that is now in its 25th year. It’s not quite a coven (at least by how I judge the word), but that’s still very impressive.

Most dictionaries define coven rather simply. In relation to Witches the Oxford English Dictionary defines coven as: A group or meeting of witches, but that doesn’t quite work for me. A coven is more than just a meeting of Witches, it’s more like a close family of Witches.

The phrase “in perfect love and perfect trust” gets thrown out so often these days that it’s almost meaningless. I’ve heard it used at open circles with hundreds in attendance, and looking around I certainly didn’t feel perfect love or trust. But a coven is a different animal, and the phrase means everything in that situation. For a coven to operate well, it needs to be standard operating procedure, but it’s something that can’t be forced, it has to evolve organically.

While the Oak Court (the name of our coven, and also the street we live on) will be celebrating five years this Friday, it wasn’t a coven from the start. We originally just wanted to start up a circle in our house because it’s hard for my on-call-laboratory-wife to travel places. We also wanted to be part of a group that would start on time and be done by ten or eleven (that on-call thing again!). We started by inviting people we knew from the area who weren’t involved in a lot of other things over to our house for rituals.

Several months into that experiment a group began to coalesce and we started calling our circle the Oak Court because we couldn’t think of anything better. (“Where are you going?” “I’m going to Oak Court.” Also, it sounds kind of cool.) One night in September, seven months after our little experiment began I noticed just how much everyone seemed to like each other. People chatted and socialized for hours after ritual and it all just felt so right.

Those first eight or nine months our rituals were all-over-the-board-eclectic. Our quarter calls were always different, and we’d drift from (Janet and Stewart) Farrar-style rituals to things a lot more open and loose. After the bulk of our group knocked an overly Witchy Samahin ritual out of the park for a local group across the hill, we decided to adopt that style for all of our rituals. With the exception of a few minor tweaks here and there we’ve been using that same ritual format ever since. A month or so later I created a mini-Book of Shadows for our group and we formally adopted the word coven to describe our group.

For a coven to be successful I think a few elements are essential. For starters a coven is exclusive. This bothers a lot of people, but to truly operate in perfect love and perfect trust only compatible people can be let into the coven. If anyone can join a coven at the drop of a hat, it’s not a coven, it’s more like an open circle. No problem with that, but you can’t love and trust people when you don’t really know them.

I know that in my local area there have been some hurt feelings because we didn’t feel comfortable working with certain people, but some of my absolute best friends in the area aren’t in our coven! It’s about compatibility, and if someone just isn’t compatible for whatever reason it’s not something anyone needs to take personally. There are lots of Witchy-opportunities out there, and people are always free to start their own groups.

While we don’t let just anyone into our coven, we do have processes in place to make sure our coven is always capable of growth. Covens are living things, which means there have to be ways to get new people into the magick circle. Being a living thing, it also means that people will drop out from time to time, the pruning of the coven and the growth of new leaves in their place reminds me of “all that dies shall be reborn” (in a metaphorical sense of course). When someone leaves it can be heartbreaking, but we wish them well and keep a light on for them if they ever wish to come back.

Covens are going to vary of course, but I think a shared sense of ritual identity is truly beneficial. For our coven this means the same opening/closing frame at every ritual, and a whole host of traditions that we only share with each other. As an eclectic-coven we aren’t necessarily oath-bound, but there’s nothing wrong with “keeping silent” about some of the things we only share with one another.

Every successful coven also needs some sort of leadership structure. Some covens vote about everything, and others operate by consensus, and probably many more are benevolent dictatorships. We began as one of those benevolent dictatorships, but over the years adapted and now our High Priest can’t simply add anyone to our coven without the consent of everybody else. (In my defense, I was pretty good at adding people those first few years!). And there’s nothing wrong with benevolent dictatorships or any other model, as long as they work for the coven and no one is being taken advantage it’s all good.

Not every Witch abides by an it harm none, but a strong coven certainly has a shared sense of right and wrong. We don’t have to agree on every little political issue, but I think we all agree on how to treat others (as human beings). Racists, misogynists, transphobes, and anti-gay assholes need not apply for admission into the Oak Court (and we are rather sure they wouldn’t ask anyways). If a coven has bonafide leaders, they need their own set of ethics too. No leader should ever be in a position to take advantage of a coven member.

I’m thrilled that my coven is celebrating five productive and powerful years together. Here’s to many more! 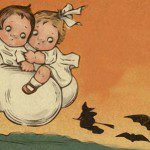 March 2, 2017
Who Should Be In Our Circles? On Minors, Children, and People Who Don't Want to Be in Ritual
Next Post 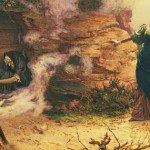 March 7, 2017 Witchcraft and Wicca Can Be the Same Thing
Recent Comments
0 | Leave a Comment
"As long as you are not publicly worshipping a deity from a living religion, I ..."
rosewelsh44 Wicca: Misconceptions & Misidentity
"Celts and Gauls seemed to allow anyone into their tribe who proved themselves worthy. That ..."
rosewelsh44 Wicca: Misconceptions & Misidentity
"True. And you'd probably get the disapproving look for even asking for them. I read ..."
Amanda Ingalls Why We Need to #DefendOccultBooks
"I had a friend once who tried to preach to me how to be Wiccan, ..."
Amanda Ingalls Why We Need to #DefendOccultBooks
Browse Our Archives
Related posts from Raise the Horns