When You Know the Magick & Witchcraft Are Real

I think we all have doubts about spiritual matters from time to time, skepticism seems to be a part of human nature. I’ve often wondered if I was simply making everything up in my head in order to provide myself with a a sought after experience . . . . . AND then I remember the times when I’ve truly felt the powers of the divine and experienced magick’s results firsthand.

There are moments in rituals where you just know. Maybe it’s the smile of Bacchus, just under the smile of an old friend. Or maybe it’s when the Cone of Power’s been built and the energy in the room suddenly gets as heavy as a San Francisco fog. Or perhaps it’s when you push against a magickal circle and feel its power and protection.

I’ve had lame ritual experiences, and extraordinary ones, and a great deal more somewhere in the mushy middle between those two extremes. The truly draw dropping moments don’t happen at every rite, but when they do happen they stick with you. They remind you just why we work magick and walk between the worlds.

THE CIRCLE DOES WHAT ITS SUPPOSED TO DO

A Witch’s circle is designed to do three things: protect those occupying it, serve as a space between the mundane and magickal worlds, and contain energy. When its cast properly you can literally feel it working. In a well cast circle the temperature in your ritual space will go about ten or twenty degrees. The skeptic might say “well of course it goes up, it contains a bunch of Witches doing Witchy things.” But that doesn’t explain why that temperature goes down the moment the circle is released and long before the door in my ritual room is opened.

The best rituals in magickal space feel almost like a waking dream. The energies of goddesses and gods mixes with that of our Mighty Dead and all of those in our ritual space. The incense and candlelight help to create an otherworldly feel, but it’s the circle holding in the magick and energy that tells me what I’m doing is real, and that it works.

DRAWING DOWN THE MOON

Without question the most extraordinary experiences I’ve had in the circle revolve around the drawing down the moon. When a goddess (or god) enters the body of their servant and priestess everything in the circle changes. Energies increase, consciousnesses change, and it feels as if the entire coven has been dropped into a waking dream. Not every drawing down experience is as dramatic as I’m writing about here, but when it works you just know.

Deities don’t just change the person they are inhabiting during a drawing down, they change everyone in their vicinity. Invoke a Mother Goddess and everyone in the circle will begin to feel as if they are enveloped in warmth and safety. Invoke Dionysus during the right season and soon all those around you will be swept up by his energy and enthusiasm.

The most dramatic transformations usually involve the person who is doing the drawing down. Their mannerisms and facial expressions will change, and the cadence and tone of their voice will become other-worldly. I know who my wife is, she’s someone else entirely when the Goddess resides within her.

It was May of 2015 and our coven had just done a very intensive job spell where we had created mojo bags to help us find whatever it was we were specifically looking for. While I was putting my bag together I imagined myself sitting in front of my computer writing books. It had been a longtime dream of mine, and in 2015 I felt like I was finally ready for such an undertaking, and I poured all kinds of energy and intention into that bag.

Two weeks later I got an email from the acquisitions editor at Llewellyn asking me if I would be interested in writing a book about athames. After dancing around my house for the next 48 hours I replied with an emphatic yes (and then began writing more and more books). Did I get a book contract just because of the magick? Most certainly not, and I had just written an article about athames before the book offer, but did the magick help? I absolutely believe that it did!

This particular incident, coming rather out of the blue, is one of my favorite illustrations about the effectiveness of magick, but it’s not the only one I’ve experienced. I’ve had money show up at just the right time in the past, and used magick to keep creepy and negative people out of my life. I don’t know exactly why magick works, but it does, and it’s changed my life, and when you experience it working and see the results right in front of you it’s proof that your magick and Witchcraft are working.

THE CONNECTIONS ARE REAL

Ultimately I believe that ritual is about connection. That connection can take several different forms. We connect with our fellow Witches, our deities, the Earth, magickal energy, and our true will, and when these connections are real and strong ew can feel them. Sure, it’s not always in the most tangible way, and maybe it’s an abstract that’s impossible to measure, but the lessons we learn when working magick and the Craft are real.

Before stepping onto the Witch’s path I was a passive passenger just along for the ride on the Wheel of the Year. Now the change of the seasons is something I feel both physically and emotionally. Drawing down is an amazing experience, but I feel the deities that are close to me on a daily basis, and some of them I’d never invoke into a Wiccan circle. Before the Craft I wondered if deity was ever truly there, and now I know it is.

My practice also forges very real bonds between friends and lovers. My covens are my heart, and walking the Witch’s Path with my wife has only deepened our relationship. My magick, my practice, and my gods are all very real things, and my experiences with those things strengthens both my faith and my resolve as a Witch.

*OK, I’ve really only written 3.5 books since I co-wrote that third book with Laura Tempest Zakroff. 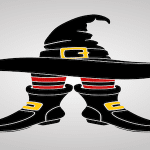 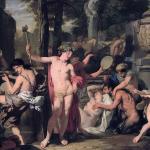 February 22, 2018 In the Presence and Service of the Gods
Recent Comments
0 | Leave a Comment
Browse Our Archives
Related posts from Raise the Horns