The Agency of Mabon ap Modron

There are people who complain about the words Ostara and Litha being used for the Spring Equinox and Summer Solstice, but it pales in comparison to the amount of people who just really hate the word “Mabon.” I get it, there was no Autumn Equinox festival called Mabon, and the rationale for using it as a name of the Autumn Equinox is a bit nonsensical. I’m not a huge fan of it either, but at this point I just don’t think it’s worth getting upset about.

Mabon ap Modron is a figure from Welsh mythology and the source of Mabon as a name for the Autumn Equinox. He’s not a frequent figure in that mythology and only shows up once in The Mabinogi, where he’s rescued by King Arthur. It’s likely that he was a deity of some sort before becoming a mythological figure, and he’s probably related to the Celtic deity Maponos, though it’s unlikely we’ll ever know for sure.

Earlier this week I noticed some of my Welsh friends complaining about the sabbat often called Mabon, believing that it disrespects the figure Mabon ap Modron. But does it? If we believe that our relationships with the gods are reciprocal, and that honoring them, worshipping them, and even just plain saying their names gives them power, maybe his name being used for the equinox has worked out well for him? I’m not sure anyone would write or talk about him very much at all if he hadn’t been sucked into the vortex of the Autumn Equinox.

I’d argue that using his name for the equinox has given him a new lease on life, and maybe he wanted it that way? Everyone loves to write about how the gods have agency, until the gods are used in a way they disagree with. Who is to say that Mabon ap Modron didn’t whisper in Aidan Kelly’s ear four decades again when Kelly began looking for a poetic sounding name for the Autumn Equinox? I remember as a Witchling in the 90’s wanting to learn everything there was to know about Mabon ap Modron because his name was attached to my favorite harvest festival.

Even if people are invoking Mabon ap Modron in a way that’s different from his historical nature, I’m not sure we can say with absolute certainty that he disagrees with that. After all, he’s allowing it to continue (there’s that agency thing again). I don’t think deities are correspondences or simply figures from stories, but I do think myths have the ability to change over time, and that new ones are slowly being created. Perhaps we are in the middle of such a change with Mabon ap Modron? (And deities have many faces, a deity can be honored in a traditional way and a new fangled way as well. They are deities after all, I’m sure they’ll figure it out.)

I think we also sometimes forget that language is a living thing, which means it’s going to evolve. The definition of words are going to change over time, and sometimes a word will start being used for a purpose that has nothing to do with that word’s original intention. The word bully for instance once meant sweetheart. It obviously doesn’t mean that anymore.

We’ve reached a point where “Mabon” now means the “Fall Equionx” to millions of people even if that’s not what it was originally intended to mean. Even those who don’t like Mabon as a name for the Fall Equinox know exactly what someone means when they say “I’m having a Mabon ritual.” The names of deities are in a whole host of words today too. I’m sure for some of you Thursday still means “Thor’s Day,” but to most people it simply means the fourth or fifth day of the week (depending on when you start the week). Words have a life of their own, regardless of where they started.

Don’t like Mabon as a name of the sabbat? Simply call it the Autumn Equinox, and if you feel the need to talk about Mabon ap Modron go ahead, I’m sure he’d like that. But there’s no reason to belittle someone for calling the equinox Mabon or to use barf emojis every time you see the word mentioned in social media. 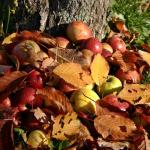 September 12, 2018
The Witch's Guide to the Autumn Equinox (Mabon)
Next Post 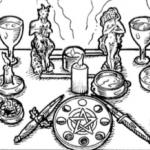 October 3, 2018 The Witch's Toolbox: The Pentacle
Recent Comments
0 | Leave a Comment
Browse Our Archives
Related posts from Raise the Horns