The Witch’s Toolbox: The Pentacle

The pentacle is often confused with the pentagram, and according to the Oxford English Dictionary, pentacle is a synonym for pentagram, but that’s not how the words are gen- erally used in Witchcraft. In Witchcraft, the word pentagram refers to a five pointed star, with the single point usually facing upward. Pentagrams are often ringed by a circle touching all five points of the star, but the circle is not necessary for something to be called a pentagram.

The word pentacle most often refers to a disc-shaped working tool generally out of metal, clay, or wood with a star in the center. The center star tends to have five points, though variations do appear from time to time and vary from Witch to Witch. A pentagram charm on a necklace is often called a pentacle too, which makes sense because just like the working tool, it’s a physical object generally made of metal, clay, or wood.

Both pentagram and pentacle come from the Greek word pentagrammon, penta being Greek for “five” (think pentagon) and grammon meaning “line.” Pentacle first came into the English language during the sixteenth century and originally referred to any magickal disc used to summon angels or demons (generally referred to as “spirits” in the books of the period). Most often these discs contained five-pointed stars, but not always. The sixteenth-century Key of Solomon, for example, provides instructions for creating forty-four different pentacles, only two of which contain a five-pointed star.

The word pentagram has only been in use since the nineteenth century, but pentagrams as we understand them today have a long history in religious and magickal tradition. Five-pointed stars were used in ancient Greece, Sumer, Babylon, India, China, Mexico, and Peru. The pentagram was later used in Christian tradition to represent the five wounds of Christ upon the cross, and for good luck. The device also appeared on the shield of the legendary Sir Gawain of King Arthur’s Round Table. In Jewish tradition the five-pointed star can be seen in the Kabbalah, and there are claims that it was also used as the seal for the city of Jerusalem.

To the followers of the Greek Pythagoras, the five-pointed star was valued for its mathematical precision and because it was said to represent the five points of the human body: head, arms, and legs. A similar idea was expressed by Henry Cornelius Agrippa in his Second Book of Occult Philosophy (1533). Agrippa’s use of the symbol made it forever synonymous with Western magickal traditions and, by extension, modern Witchcraft. Other contemporary groups to use the pentagram include the Freemasons and the Church of Jesus Christ of Latter-day Saints.

In modern Witchcraft the pentagram right-side up is said to represent the triumph of the spiritual over the material. The upward point represents spirit, with the other four points representing water, fire, earth, and air when listed clockwise. The upside-down pentagram is often associated with Satanic or left-hand-path traditions, and was popularized for this purpose in the 1960s by the founder of the Church of Satan, Anton LaVey (1930–1997), because it represented the triumph of the material over the spiritual. In some Wiccan traditions the upside-down pentacle represents a Witch elevated to the second degree, a representation that predates LaVey’s church.

What Is a Pentacle Used For?

Most Witch books that include the pentacle say very little about it. Generally it’s listed as an element of earth, and as something used to consecrate salt, water, incense, and candles. Those things are true, but they downplay the pentacle’s original meaning and significance in circle. In Witchcraft Today (1954), Gerald Gardner writes that the “unimportant pentacle” was said “to be used to command spirits,” though he points out that most Witches don’t generally “command” spirits or other sentient forces.

Gardner’s thoughts on the pentacle in Witchcraft Today are valuable because they shed light on the pentacle’s true function in the modern Craft. Certainly the pentacle is used for consecrating and charging items, but its original use was as a tool to call upon otherworldly entities. Beginning in the Renaissance and continuing through the early twentieth century, these entities were variously described as spirits, demons, or angels. Many Witches still work with such beings, but many more of us work with deities: goddesses, gods, and everything in between. The pentacle is not just a tool used for consecrating things, it’s a window between the worlds (and we can open it!).

I often think of the pentacle as my altar’s “umbilical cord,” as it’s what connects my ritual space to powers much greater and higher than myself. When I was a fetus, my mother was the higher power, and now as an adult I honor the higher powers of the Lord and Lady through the pentacle. If a magick circle is a “space between the worlds,” it makes sense that there would be some sort of gateway into that other world on our altars.

In ritual the gods don’t just suddenly emerge from the pentacles on our altars, but I do feel as if that’s where a great deal of power and energy radiate from, which is probably the reason the pentacle is used for charging and consecrating items. When blessing the elements in ritual (usually represented by water, salt, incense, and a lit candle), each individual “element” is put upon the pentacle for consecration. I think most Witches simply place things on the pentacle without wondering why, but we set things on the pentacle because it’s a bridge between the worlds. It’s a place radiating power, and it’s holy because the gods exist just on the other side of it. It’s for this reason that many Witches also place magickal items on their pentacles to charge.

Ceremonial magicians sometimes refer to a personal pentacle as a pantacle (because it contains the word pan, which translates to “everything” or “all” in Greek). Unlike the traditional pentacle, the pantacle is an extremely personal tool. It’s designed to represent how the individual magician understands the entire universe and their place within it. Pantacles often include a magician’s magickal motto, a phrase designed to emphasize the magickal nature of the practitioner. I like the idea of a very personal pentacle, though I don’t think I’ve ever met another Witch who uses the word pantacle when talking about their ritual tools.

This bit about the pentacle was excerpted from: The Witch’s Altar: The Craft, Lore & Magick of Sacred Space by Laura Tempest Zakroff and Jason Mankey. The book includes instructions for making your own pentacle, and rituals to charge and bless that pentacle. It also includes a whole lot of stuff about altars! The Witch’s Altar can be pre-ordered now on Amazon, Llewellyn Worldwide‘s Website, and at your local Witch store! The amazing art in this piece in included in the book and is by the incomparable Mickie Mueller! 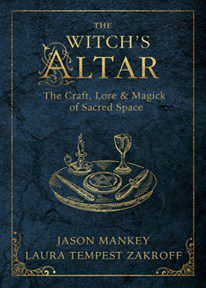 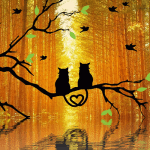 September 18, 2018
The Agency of Mabon ap Modron
Next Post 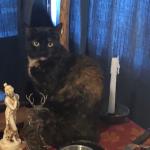 October 4, 2018 I Love My Witches (And Druids, And Pagans)
Recent Comments
0 | Leave a Comment
Browse Our Archives
Follow Us!

Self-Initiation as a Solitary Practitioner: What...
John Beckett
Related posts from Raise the Horns