Paganism & Witchcraft Are Not Venn Diagrams

Every once in awhile a Venn Diagram from the excellent Witchy Words blog gets dusted off and passed around the internet. (And Witchy Words will be missed It shut down mostly in April of 2019.) I’m sure the original diagram was created with the best of intentions and those who pass it around do so in good faith, but I’ve always found its explanations far too limiting. I just don’t believe that terms and categories such as Paganism, Wicca, and Witchcraft are capable of being diagramed.

If you aren’t sure exactly what a Venn Diagram is, Merriam Webster definition defines a Venn Diagram as: “a graph that employs closed curves and especially circles to represent logical relations between and operations on sets and the terms of propositions by the inclusion, exclusion, or intersection of the curves.” The problem with words such as Paganism, Wicca, and Witchcraft is that they aren’t logical. Most often they are emotional terms of self-identity, which is why treating them “logically” can be rather problematic and most often leads to arguments online (and blog posts like this one).

At this point in my life I’ve mostly given up on trying to define Paganism, Witchcraft, and Wicca because I’m not sure it can really be done without pissing someone off. What I tend to dislike most these days are attempts to limit those words, or divorce them from their historical and contemporary contexts. As someone who loves history and loves getting out and visiting the Magickal/Pagan Community, I see these words used in a variety of ways by a variety of different people. 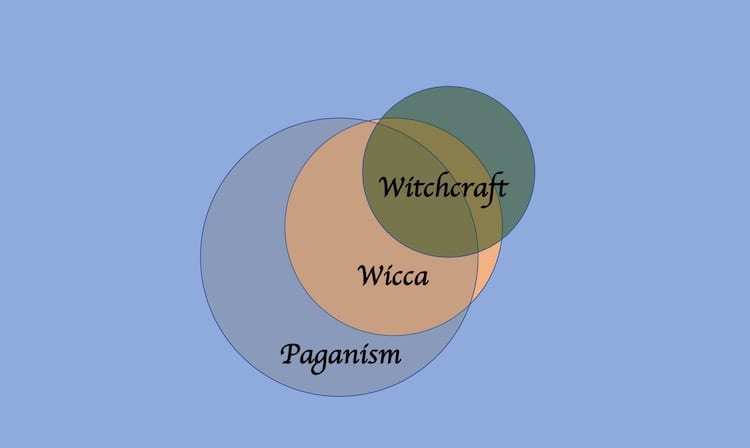 The Venn Diagram I’m writing is problematic right from the start with its definition of “paganism”: “A modern religious movement of paths influenced by historical paganism.” Most certainly everyone today who self-identifies as a Pagan is walking a rather modern path. Even those who do their best to reconstruct ancient pagan practices are still being influenced by our modern ideas, especially ideas about what is acceptable or not acceptable in our society.

But not all Modern Pagan practices are attempts at historical reconstruction. One of the most influential, the Church of All Worlds, was primarily influenced by the science fiction novel Stranger in a Strange Land.

The multifaceted nature of today’s Pagan Community means that people come to Paganism for a variety of reasons. Honestly, I think there are a lot of people who simply love the freedom that Paganism affords. They can worship whatever deity they want (and let’s not forget, there are a lot of deities people honor today that are not ancient), or no deity at all, and they can party and take lovers without any judgement (as long as everyone consents and there are responsible!), There are also a whole lot of self-identifying Pagans who actively bristle at anything to do with “religion,” a reaction that seems rather prevalent in our extended community these days. 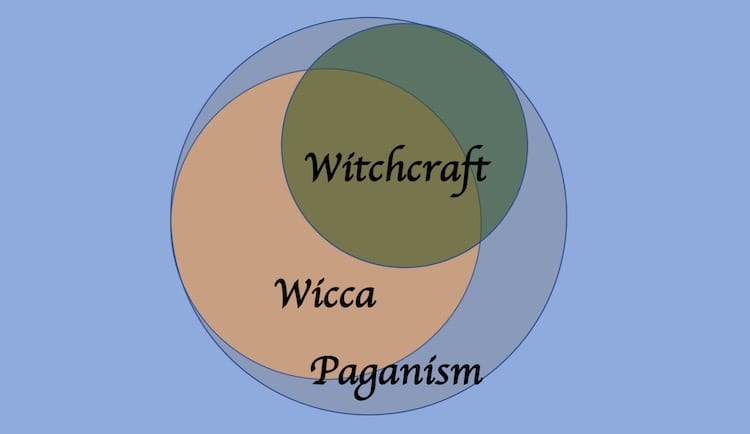 Most Pagans I know love the Earth, which has always felt like a more natural rallying cry to me for me when it comes to what “Paganism” is. Whether its celebrating the sabbats, hugging trees, or at least paying lip-service to the idea of responsible stewardship, this is something I see most Modern Pagans engaging in. Ultimately, I’m of the belief that if you call yourself a Pagan, you probably are a Pagan. That doesn’t apply in the reverse though, others are also what they identify as, and we don’t get to decide they are Pagan simply because it makes us sound more formidable when we add over a billion Hindus.

I know a lot of Wiccans today who actively bristle when nestled under the Pagan Umbrella, and there’s some truth to that. Wiccan-Witchcraft has origins in fraternal orders such as Freemasonry, and contains a very magickal word view. There are people out there who put the “birth of Modern Paganism” in 1967, which even by conservative standards, is at least fifteen years AFTER the first (what we today would call a) Wiccan-Witch went public. Keeping that in mind, it could be argued that Paganism was simply influenced by Wicca in its traditional form, and is seperate from it.

The rest of the definition in the Venn Diagram I’m writing about here is hard to quibble with “A modern pagan religion blending European folk traditions with 19th and 20th century occultism.” I’d go back even further though when it comes to that occultism. Texts from the grimoire tradition (starting in the late Middle Ages/early Modern Period) are foundational when it comes to a lot of Wiccan ritual and structure. Wicca may be modern, but it’s roots are deep. 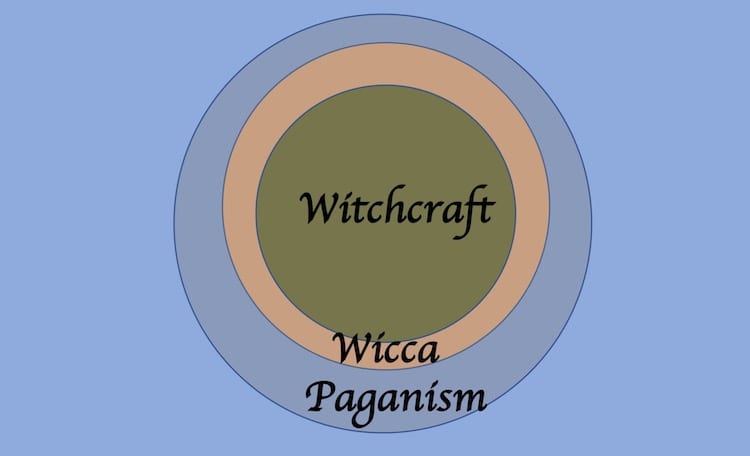 It’s become common to disassociate Witchcraft and Wicca these days, something done in this particular diagram, but it’s something I’ll always take exception to. The very word “Wicca” means Witch, and was originally pronounced with a “tch” sound instead of the hard “c” we use today. Wicca simply meant “male witch” like wicce met “female Witch.” How people who self-identify as Witches and whose practice has been traditionally known as Witchcraft only barely overlap with “Witchcraft” is a mystery to me. Wiccan-Witchcraft is not the only kind of Witchcraft, but it is a type of Witchcraft. (Not every Witch is a Wiccan, but at least according to history and the meaning of words, every Wiccan is a Witch.)

The most problematic definition on this particular diagram involves the word “Witchcraft” and that shouldn’t surprise anyone. Witch is a word with multiple meanings, and has been used in a variety of ways over the last 1200 years. I guess I shouldn’t be surprised that Witchcraft is defined here as: “The non-religious practice of the manifestation of a particular intent from the interconnectedness of the world.” Magick can most certainly be separated from a religious or spiritual viewpoint, and many Witches when practicing magick are trying to manifest their intent through natural energy, spirits of the dead, and various other means, but . . . . 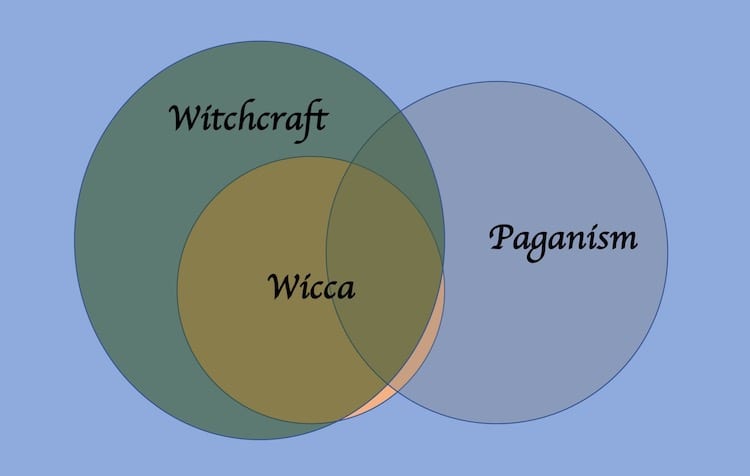 One does not need to practice any sort of religion to practice Witchcraft, or believe in any sort of deities or higher powers. But traditionally most everything we call “Witchcraft” has utilized components that might be considered “religious” or “spiritual.” The innocents who were executed during the witch trials of the early Modern Period (1380-1780) were all believed to be a part of a network of religious witches overseen by the Devil.

It’s become popular to refer to folk magick practices as “witchcraft” these days, and most of those folks also utilized religious or spiritual ideas. Cunning-folks used Bible verses when crafting spells, along with religious symbols like crosses. The goddess Diana has been associated with Witchcraft for millenia, which is again another spiritual or religious belief. I also know lots of people who say that working with the spirits of the dead is a requirement in Witchcraft, and I’m not sure how that quite lines up with “interconnectedness of the world.” 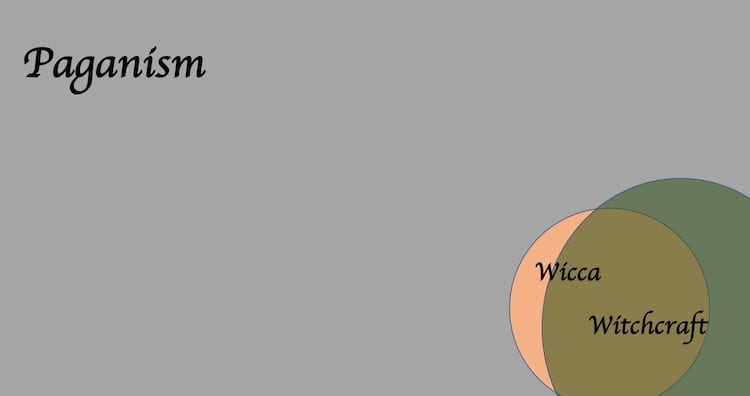 I think we’ve moved further away from most forms of magick (and by extension Witchcraft) needing a religious or spiritual component. And again, I’m not arguing that such things are necessary, but historically they have been a part of Witchcraft. To divorce Witchcraft of anything related to religion seems a bit limiting.

In the end Witchcraft, Wicca, and Paganism overlap (or don’t) where we as individuals need them to. For some of us they might be concentric circles, for others city-states all walled off from each other each other. As for me, I’m not a big believer in walls, and I celebrate my Paganism when I’m in the great outdoors, practice my Witchcraft when I need a little spellwork done, and gather in my Wiccan circle when the coven meets. 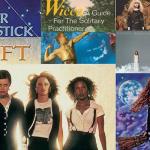 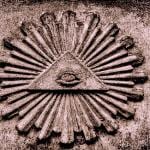 August 20, 2019 Secrets of a Pagan Blogger
Recent Comments
0 | Leave a Comment
"Mabon's my favourite, I was surprised how low it was. I didn't expect it to ..."
Nekoshema Your Favorite Sabbats (Or Sabbats By ..."
"Love this! We often just call it "Pagan Thanksgiving" and have done with it. It's ..."
Seba O’Kiley Mabon: The Most Pressing Issue of ..."
"Well done, Jason!"
Angus McMahan Mabon: The Most Pressing Issue of ..."
"One thing I can't understand about Buckland's altar set-up is that he recommends a drinking ..."
Nicholas Chiazza Books Aging Poorly: Scott Cunningham’s “Wicca”
Browse Our Archives
Related posts from Raise the Horns