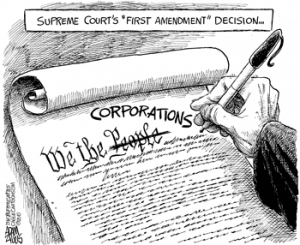 More Americans believe in witchcraft, ghosts, and UFOs than agree with Citizens United. When 80% of the people agree on an important issue & the leaders refuse to act, something has to change. I’m for finding a peaceful solution.

Citizen’s United refers to a 2010 Supreme Court case on how elections are financed. The ruling said that corporations are people, and money is speech. You can’t limit free speech. So corporations should be able to spend money (speech) like people do.

But we limit speech all the time. You can’t say bomb on a plane. You can’t yell fire in a crowded theater. Over three-fourths of the people (not counting corporations) in our society believe that corporations shouldn’t get to speak so loudly at election time.

Here’s how this affects you and me. Let’s say Snuffy Smith is running for the U.S. Senate. You like Snuffy & want to help him get elected. You scrape together $2,600, which is the legal limit for a person, and give it to his campaign. Gigantor Corp. doesn’t like Snuffy. So they take $26 million and give it to a “super” PAC called Snuff Snuffy, which spends all $25 million on attack ads which you have to watch for months. Your name appears on a public donor list, but Gigantor’s donation is secret. They can say, “Donation? What donation?”

How much does your speech ($2,600 worth), matter compared to the $26 million worth of free speech that Gigantor Corp. purchased? Snuffy’s going down.

Now if you were uber-rich, you could also spend all you want on a “super” PAC, too. But most of us don’t have that luxury. Corporations can generate political capital in ways that people can’t. They actually usurp the rights of people and undermine the democratic process.

80% of the people in this society think this is a bad idea. There’s a lot of polling on this issue, and it’s pretty convincing. The problem is that the Supreme Court is too political–as in “brought to you by Nabisco, General Electric, Wall Street, and Big Oil”–four very powerful “people.” Only a third of the citizenry believe that Justices make decisions on the law alone. Most believe it has become a political process.

Hence the petition to make a constitutional amendment outlawing the tenets of Citizens United. It’s the only way the Supreme Court can’t get around the will of the people. Elections should be publicly funded in this country. Lobbying the government should be much more difficult than it currently is. Lobbying should happen in public and there should be ZERO money involved.

What really gets to me, though, is the personhood part. The theology bothers me because it devalues human life. Personhood is sacred to the Christian, something we receive from the creator, and from each other. Personhood needs to be protected and understood. This concept is basic to the Christian story. Here’s an excerpt from An Evangelical Social Gospel? where I talk about what it means to be a person:

The person refers to a human being, as opposed to an animal or a thing, who is defined by their association to the larger group of people…What makes us human is our participation in humanity.

The classic philosophical statement of this view can be found in G.H. Mead’s Mind, Self, and Society. The argument contained in Mead’s book, which was published in 1934, is compelling. The point I want to accentuate here is that the human awareness of “the self ” naturally comes through an experience of “the other.” The preeminent American theologian Stanley hauerwas sums up Mead’s argument by saying, “The self is fundamentally social. We are not individuals who come into contact with others and then decide our various levels of social involvement. our individuality is possible only because we are first of all social beings. I know who I am only in relation to others, and, indeed, who I am is a relation with others. The ‘self ’ names not a thing, but a relation.”

This is the relational view of personhood. What defines me as a person is not my individuality or uniqueness, but my essential connectedness to other people. The only way I can tell who I am as a person—or discern that I exist at all—is in relationship to other people and to God. Personal existence is necessarily social.

Personhood is sacred. A corporation isn’t a person, it’s a thing. It shouldn’t be treated like a person. Any society that calls a corporation–an entity that exists with the sole purpose of profit–a person, is devaluing what it means to be human. That’s not just an ethical issue, this is deep down in the faith of the Christian, and our experience of what it means to be a human.