What About the Real Problems that are Driving People to Deconstruct?

It was a “Farewell Rob Bell” moment for the neo-Reformed harbingers of orthodoxy. I have always like Matt Chandler, but his recent assertion (in a clipped video posted to TikTok) that those who deconstruct their Christian faith just want to be in on the sexy thing, and that one cannot deconstruct an authentic experience of Christ (so your faith must not be authentic), has only amplified the deconstruction phenomenon. For awhile now, the hawkers have been cranking out books on deconstruction like fidget spinners, and Christian celebrities offer my story of deconstruction like spiritual advice columnists. It can be a bit cloying, but there’s no putting this toothpaste back in the tube. Deconstruction is the thing now.

Apart from being a dumb thing to say (which I can forgive, because I say dumb things all the time), Chandler’s remarks lack self-awareness. Consciously, he clearly believes he is defending the gospel, God, and Christian orthodoxy. But, as Hauerwas often says, “Anytime you think you need to protect God, you can be sure that you are worshipping an idol.” In this case, the idol is the tight system of modern neo-Reformed Calvinism, and the incredible evangelical/political power its keepers wield. They are God’s theology cops, policing the borders of orthodoxy. Their power is rooted in their authority over theology, and their ability to dictate and even control not only beliefs, but bodies—especially with regard to women in ministry, and sexuality.

This control over beliefs and bodies is the key to understanding the true (and likely unconscious) reasons Chandler said what he did:

The neo-Reformed camp is uncomfortable with deconstruction not because it is a danger to the gospel or to a person’s soul, but because deconstruction represents a threat to their power over people’s beliefs and bodies, exposing their own culpability in the issues that are driving deconstruction in the first place, some of which are embedded in their own theology.

When I sit with people who are deconstructing, nearly all of them are driven by some version of the same concern, and it has nothing to do with what’s sexy. They are looking at the fruits of American Christianity—what Christians are about, what they fight for, who they embrace, who they hate, and how they treat their enemies—and they’re saying: if that’s what Christianity is about, I don’t know if I can be part of it anymore. They speak these words through heart-wrenching sorrow and tears, because they love Jesus but have real problems with what the church in America has become.

Unsurprisingly, the real issues driving this season of widespread deconstruction have everything to do with the church’s relationship to power over other people’s bodies. The top ten issues I hear are:

These are the legitimate concerns which have thrust many sincere believers into the wilderness to deconstruct (atonement theologies, and how to read the bible should probably get an honorable mention).

If you ask me, the defensiveness around deconstruction exposes a deep insecurity. Chandler’s video is a signifier, revealing that—at least on some unconscious level—fundamentalist and neo-Reformed leaders know the very source of their strength and power is now undermining the church. My sense is that neo-Reformed leaders are defensive about deconstruction because have too much power riding on the issues of patriarchy and sexuality alone to ever risk entertaining even the most legitimate theological and exegetical challenges to their dogmatic stances. I expect their attacks to intensify as this pressure grows, and it will only grow.

Maybe I am wrong. Either way, I don’t think the driving force behind most deconstruction is a desire to be sexy and cool, or to be free from religious constraint. The deconstructors are trying to hold onto faith, not let it go. They are bravely chasing a deep intuition that the church can do better, and they are right. Their persistence is commendable, and we ought to be equipping them for this project instead of dismissing or condemning them.

One last thing. Most of what is called “deconstruction” isn’t really deconstruction at all. True philosophical deconstruction (as pioneered by Derrida) is a very particular thing, and it’s not what most of these people are doing. Deconstruction, in the popular sense of that word, should be a normal aspect of growth toward maturity. In a less insecure era we would just call it: discipleship. Christian beliefs always change and develop over time. If you don’t believe me, ask the critics of deconstruction why they don’t require women to cover their heads, or wash each other’s feet. Everyone picks and chooses. Everyone evaluates and changes their beliefs over time. This is not a problem, that is, unless your power is tied to something which is being called into question.

If you are deconstructing, I want to encourage you to keep going. I’ll tell you what I often tell my own congregation: If the you of today doesn’t call the you of five years ago a heretic on at least one or two issues, then you’re likely doing it wrong. Find a graceful (small) congregation, embrace some basic Christian practices, and keep on faithing-it. 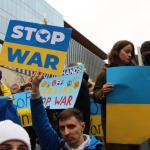 March 23, 2022 The Unacknowledged Reason for Putin’s War
Recent Comments
0 | Leave a Comment
""murderous attack' is part of war and the only goal war is to win"
Rohan The Unacknowledged Reason for Putin’s War
"Even as a child I rarely found "Slapstick" funny. The antics of "The Three Stooges" ..."
Lindsay Stafford Best April Fools Prank Ever & ..."
"they can be fun as long as they don't go too far."
Brandon Roberts Best April Fools Prank Ever & ..."
"Amen!"
Rachel The End of Dispensationalism
Browse Our Archives
Related posts from Paperback Theology