There’s a big Critical Race Theory kerfuffle happening right now around an op-ed in the Washington Post by Marc A. Thiessen, with an assist from Danielle Pletko (both from the American Enterprise Institute), and from Allen Guelzo (Princeton) whose field is not philosophy, but history.

Let me say up front that I don’t use Critical Theory, nor do I think it’s helpful at the end of the day. It’s too easy to use it to justify almost any position. However, I think its important to tell the truth about even philosophies with which we disagree, and the truth is Critical Race Theory is one of the more redemptive branches of Critical Theory.

The whole article is a disaster, but the most controversial passage reads:

“Critical race theory, Guelzo says, is a subset of critical theory that began with Immanuel Kant in the 1790s. It was a response to — and rejection of — the principles of the Enlightenment and the Age of Reason on which the American republic was founded. Kant believed that “reason was inadequate to give shape to our lives” and so he set about “developing a theory of being critical of reason,” Guelzo says… ”

Yeah, none of that is true, which is too bad, because the real story is cool, and deserves a fair telling:

Immanuel Kant is one of the titans of philosophy. He noticed that there were certain rational problems that reason itself could never solve. If you are arguing over the existence/non-existence of God, that the universe had/didn’t have a beginning, that there is/isn’t a pure substance, or truly ‘necessary’ being, the argument always ends in a deadlock. Each side can prove their case rationally. Kant called these deadlocks the “antinomies” of reason. His conclusion was that these antinomies revealed a limitation within reason itself. Kant was not a foe of reason, as Guelzo asserts. Kant was actually using reason to show that human reason is fundamentally flawed, or at least incomplete. That… is Kant’s critique of pure reason (one of them).

So, Guelzo needs to step off, because although he’s a historian, he is clearly ignorant of the history. But that’s only part of the story.

G.W.F Hegel (also a philosophical titan) came along and argued that Kant’s observation was correct, but that he drew the wrong conclusions. Hegel said that when human reason ends in contradiction or deadlock (antinomies), this doesn’t mean one has failed to gain insight into reality, but that one has succeeded. When human reason exposes a contradiction, reason is merely doing its job, revealing the rupture or contradiction or antagonism that lives at the heart of everything. Contradictions reveal something the nature of being itself (ontology). Reality itself is dialectical, beset with these intractable or unsolvable contradictions.

Of course, you know this to be true, because you live this reality every single day. It’s why you never feel totally at one with yourself, why you are always filled with desire and unrest, why you can love yourself and hate yourself at the same time. It’s why you can feel like you are honest and constantly tell little white lies. It’s why the apostle Paul said: I always seem to do what I don’t what to do, and don’t do what I actually want to do. Everything that exists is not at one with itself. Everything is disturbed on some level. Everything is contradictory and struggling with internal ruptures and antagonisms. That’s life. That’s reality.

Critical Theory sides with Hegel in this argument, much more than with Kant. The “critical” in Critical Theory is not referring to Kant’s critique of reason, but to the critical power of reason in the positive sense. Reason has the ability to expose and probe the antagonisms and contradictions that lie at the heart of everything; not to solve them, but to tell the truth about them and hold space for these tensions, because they are what gives rise to a new possibility. That’s pretty cool.

Thiessen, Pletka, and Guelzo were only off by about 180 degrees. Either they actually know this and are misleading people on purpose, or they don’t know this and should not be writing about Critical Theory.

Dialectical philosophies and theologies urge us to explore contradictions and exacerbate them without trying to solve them, because it is only by holding contradictory ideas in tension over time that something truly new can emerge. On the other hand, if we attempt to solve the contradiction by privileging one side or the other, then we fundamentally distort reality (because contradiction is part of the way things exist), and effectively close off possibilities for a better future.

My question is: why write this WaPo article in the first place? Even more, why is Critical Race Theory such a big emphasis among the radical right (including evangelicals), especially given the fact that Critical Theory is so jargon-filled and theoretical that it borders on obscurantism? (Seriously, try and read some Habermas or Adorno. You won’t be able to understand it. This stuff is barely taught in undergraduate philosophy. There’s no way it’s being used in K-12 education).

I recently wrote an entire article about Critical Race theory, you can read it here for a broader exploration. But, I want to just draw out two possible explanations:

First: some people cannot live with ambiguity. They need the world to be black and white. They need to have clear cut right / wrong sides on every issue, and they desperately need to feel like they are on the side of the right. But, there is a reason that this position lies at the heart of every war and genocide in human history. This position is a dangerous disconnection from reality… one that is, by the way, patently un-Christian/anti-Christ.

Hegel’s insight reinforces the deeply Christian idea that the line between good and evil doesn’t run between this person or that one, this group of people or that one. The line between good and evil runs down the center of every person and every group. We are all walking contradictions. Holding the tension is what gives rise to new imagination (New Creation). Eradicating the tension leads to fascism, racism, war, and genocide. Either we can face our contradictions, confess them, and hold the tension that arises, or we can join the fascists who believe that they are right and everybody else is wrong (and must be destroyed).

That’s one reason, here’s the other.

Racism is a problem in our society, and always has been. Most people can acknowledge this, and can even admit that racism is a moral evil. However, to acknowledge that racism is systemic is different.  If white people admit the existence of systemic racism, we must admit we still benefit from racism in its systemic form. To admit that whites benefit from a complex, interwoven, socio-economic and political system that privileges those with white skin above people of color, takes away each and every white person’s ability to ignore the ways in which we benefit from racism.

The reason so many people—including Thiessen, Pletka, and Guelzo—refuse to acknowledge systemic racism (which is the point of CRT) is that they need the system to do their racism for them. That way they can feel like they are personally above racism, but can still enjoy its benefits. They can claim to oppose and abhor racism, yet still perpetuate and benefit from a racist system. The argument against Critical Race Theory is, well, fascistic, and it is made because these people don’t want to change the system because they like the way it is.

In the end, the ring-wing frenzy about Critical Race Theory is about nothing more than the protection of white power… full stop. People of good faith need to take a step back and stop perpetuating this garbage.

Thiessen, Pletka and Guelzo are not stupid people, but their explanation of Critical Theory is pretty stupid. That their explanation is so flawed leads me to believe their real aim is to promote right-wing propaganda and mislead the public. That the editors at WaPo published this article without fact-checking is inexcusable. They should force Thiessen to print a retraction.

December 14, 2021 What About the Real Problems that are Driving People to Deconstruct?
Recent Comments
0 | Leave a Comment
Browse Our Archives
Related posts from Paperback Theology 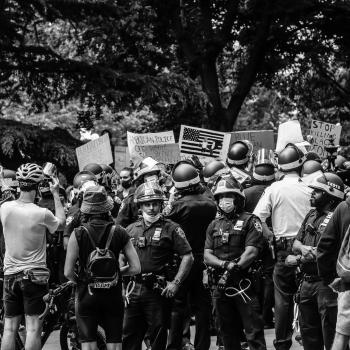