Public Jesus: Beyond the Politics of Anxiety 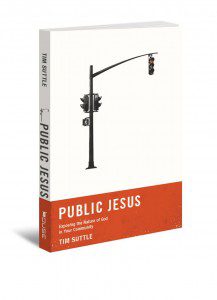 Talking politics in the local church is tricky. One statement that flies in the face of a parishioner’s strong belief and that could be the end of the conversation, the end of your influence, and quite possibly the end of their involvement in your ministry. Risk seems to outweigh reward.

On the drive to school one day my eight year old son asked, “Why does Barack Obama kill babies?” I nearly choked on my coffee, and then asked him to explain. He said, “Some kids in my class say that Barak Obama wants to kill babies. What do they mean?” Second graders, their parents clearly speaking through them, are living proof that one does not instinctively understand how to have this conversation. Spend five minutes listening to the adults on CNN, Fox News, or MSNBC and you’ll realize most adults don’t understand how to have this conversation either.

“The reason talking politics in the church is so dangerous is that we don’t know what we are talking about.”

In American politics it seems clear that the end in mind is no longer to govern well, but to kill the opposition and win at all costs. Political parties foster our worst fears, attempting to use them to turn us against the other side. Whether it’s the conservatives on Fox News, the liberals on MSNBC, or the political ads on any channel, we will hear demonization, embellished stories, and fantastic accusation. We will be told what to fear, and who to blame.

The result an atmosphere of chronic anxiety. If the politicians can keep everyone stirred up, fearful, and worried, then they are able to create a highly reactive atmosphere in which people act out of anxiety rather than hope. American political leadership today is—point blank—about leveraging chronic anxiety for the sake of gaining power.

Christians refuse to live out of anxiety because we are a people of hope. Fostering fear and anxiety in order to gain political power represents a cynicism which is simply not worthy of the Christian. When Christians decide to speak into the political arena, our voice must have the sound of hope, and our tone the tenor of peace, neither of which can materialize if we are trapped in the cycle of anxiety.

In his book A Failure of Nerve, Edwin Friedman described the impact of chronic anxiety upon a society. Over time, the society will produce in its leaders the inability to differentiate between themselves and the anxiety of the system. The leaders not only participate in the anxiety of the system, they actually perpetuate and exacerbate the anxiety through over-reacting, blaming, chasing quick fixes, or by embracing an uncompromising idealism (p.91). The reason our political discourse is so dominated by fear and blaming in American culture is that we have continually produced and chosen leaders who come to power by riding the wave of chronic anxiety.

“The reason our political discourse is so dominated by fear and blaming is that we have continually and chosen leaders who come to power by riding the wave of chronic anxiety.”

Friedman says that a healthy leader is able to name the anxiety of the system, while refusing to participate in it. Through healthy self-differentiation the leader can become the non-anxious presence necessary for growth. True leadership does not perpetuate anxiety, but names it accurately while refusing to foment it, or exploit it for power and control. The leader does not separate from those caught up in chronic anxiety (sectarianism), but enters fully into community life and becomes a transforming presence.

Christians who have become fully identified with one specific political party or the other have given themselves over to the anxieties of that sect—that goes for the left or the right. Christian political speech which exploits fear and anxiety in order to gain political influence has ceased to be Christian and is merely political. When a Christian unites with a political party agenda, they do so in contradiction to their baptism.

That the Christian rejects both the hegemony and anxiety of political parties should not be too surprising. Party hegemony fails to control us because our future is already committed to the Lordship of Jesus Christ as expressed through church. Party anxiety fails to grip us because Christians believe the world’s future is sure. Our common life bears witness to the eschatological triumph of the cross. We live in light of a reality that comes to us from the future of God, not from present anxieties or past failures. Party success is irrelevant. Kingdom success is everything. Your vote is not the most precious thing you have to give, your life is.

“Your vote is not the most precious thing you have to give, your life is.”

The Christ follower must become the non-anxious presence, particularly in an election year. While the politicians peddle fear, Christians must name the anxiety and reject it. We can say with confidence that we are not surprised to learn that the state cannot make us safe and happy. Only God can do that. We are not afraid to learn the state cannot give us freedom, justice, and peace. Only God can do that – and God will. Politicians and parties operate under the misguided belief that things will be fine if they can run the world. It is simply untrue.

Christians should readily confess we do not know how best to run the world. The problems we face – and we face real problems – are the result of our misguided attempts to run the world without reference to God. What Christians have not yet learned how to do is to refuse to let the problems of the world cause us anxiety. Not that we should hide our heads in the sand, or gloss over the brokenness. Christians must tell the truth about the darkness. Yet, when the rest of the world predicts the rise of darkness, desperation, meaninglessness, death, destruction, catastrophe, anxiety, pain, fear, blame, and so on… we speak of hope and resurrection. We speak of new life breaking into the present from the God-side of eternity. We dare to believe that living in light of the resurrection and speaking of hope will somehow change our present reality.

In the end, the particular agenda of either political party is not the fundamental issue for the Christian. There are pieces of each agenda we should resonate with, and pieces we should resist. The fundamental issue is our sole allegiance to Christ and his church. If American politics exists on a continuum liberal Democrats on the left, conservative Republicans on the right, moderates of both parties in the middle, then our confession is that Jesus transcends them all. Jesus exists on a plane of his own. Once we have committed to the lordship of Christ, then we can speak with a truly hopeful voice about the future of God breaking into the present through the presence of Christ in his faithful people.

Governments patently overpromise. Nearly universally they promise freedom, justice, and peace. Yet as Christians, we know those things only come through a right relationship with God. Nations cannot promise freedom because freedom is not theirs to give, nor is justice or peace. Only Jesus can deliver on that promise. Governments overstep their bounds when they promise to accomplish what only God can. Christians overstep their bounds when they trust in governments instead of God.

The way Christians work to bring freedom, justice, and peace to any society is not primarily through direct political action. We affect change to a society when we embody Jesus in our common life as the church. As Jesus rules in our hearts and in our common life he brings us freedom, justice, and peace. Being the church is a profoundly political act, and it constitutes a faithful witness to the world. Christian politics is not primarily practiced through the government, but through the church; not primarily enacted with our lips but with our lives.

We do politics the same way Jesus did: by patiently enduring suffering and persecution while living in faithfulness to the conviction that through Jesus Christ, the future of God has broken into the present and is making all things new again – starting with the church.

* I wrote a short book aimed at helping churches talk about Christian political speech it is called Public Jesus: Exposing the Nature of God in Your Community.

For more reading, here are some other posts I’ve written on politics:

“Why Christians Don’t Know How to Speak About Politics”

“Missional Politics for the Local Church”

“The Biggest Liars in Politics?: Outside Spending Groups”