The Purity Codes are Killing Us

Regardless of the lens you adopt through which to think about culture, consensus seems to be that the way we’ve organized our society — even our most basic forms of relating and working together — are dysfunctional at best. My take on why this is happening is that most of us operate through conscious and unconscious purity codes.

What is a Purity Code?

A purity code stems from the generalized assumption that it is possible to identify and eliminate the source of all our problems, and that when we do everything will finally be okay. With specific issues — there’s a pothole, we should patch it — there’s not really a purity code. But, as we deal with more generalized and intractable problems, all of the dysfunction in a system can be loaded onto just a few sources who tend to catch all the blame. Let’s call that the negative; whatever is seen as the generalized source of all our problems is the negative. Over time this dynamic produces a strong, even irrational aversion to those negatives. This is where the purity code steps in and promises a way to eliminate the negative, or at least put enough distance between ourselves and the negative that we’re no longer affected by it.

How to Spot a Purity Code

The concept of the scapegoat is present in many ancient religions. Scapegoating allows us to symbolically project our own sense of guilt, shame, angst, fear, or anger upon another being — who becomes a personification of the negative. Then we send them out into the desert away from society, or else kill them as a sacrifice to the gods. Scapegoating does two things at once: it allows us to give a specific name to the negative, and it gives us the illusion that we are doing something about it. Scapegoating provides tremendous psychological comfort, but it is based upon the illusion that we can escape our own complicity with the negative, that we can avoid the ways in which we are responsible for our own catastrophes.

How to Arrest a Purity Code

Arresting purity codes involves the recognition that scapegoating and chasing silver bullets are really just ways of avoiding the fact that the negative is not “out there” somewhere, it’s “in here,” within all of us. As Solzhenitsyn wrote: “The line separating good and evil passes not through states, nor between classes, nor between political parties either — but right through every human heart.” This is a deeply Christian idea.

An easy way to think this through is to use the Harry Potter narrative. The death-eaters and Voldemort dealt with the negative by scapegoating mud-bloods. Harry Potter and his friends dealt with the negative by chasing a silver bullet (finding and eliminating horcruxes). Harry’s narrative resolves as he realizes that he is the last horcrux, and he becomes reconciled to the fact that the problem of evil is not “out there” somewhere, but resides within himself.

The only way to move beyond purity codes is to go through a long process of learning to face the negative in our own lives, and the world around us. This involves a conversion of sorts, a symbolic death, a confession of our own brokenness. We must be constantly reconciled to the reality that the line between good and evil does not run between people, or groups of people. The line between good and evil runs right down the center of every human life. The line is there because to be human is to have a tiny bit of the infinite (if only as an idea or potential) in our own souls, living in constant tension with our own finitude. The negative is inescapable because it’s bound up in what it means to be human.

Christianity Can Help, But Too Often Doesn’t

The Christian story is uniquely poised to deal with the negative without resorting to scapegoating or silver bullets, because in a general sense, Christianity is the rejection of purity codes. The Christian narrative is based in Christ’s teaching that God does not run away from our brokenness. God runs toward our brokenness, reconciling it through grace, forgiveness, and presence. Christ allows himself to become the ultimate scapegoat which forever removes the need for a silver bullet.

Christ moved aggressively against purity codes. Any way you could slice up the ancient world into positives and negatives, Jesus would identify the negative and make friends with them: women, children, lepers, unclean untouchables, tax collectors, Roman collaborators, immigrants, centurions, foreigners, aliens, prostitutes, prodigal sons, and notorious sinners… he pulled them all in close and then dared the religious-types to try and eliminate him, too. Much of his ministry involved embracing the scapegoats, and dodging silver bullets.

The Christian story holds that God’s solution to the negative is not to eliminate it, but to move close with a reconciling presence. This means the negative serves as the point of contact between the human and the divine. Sometimes God’s presence makes things better, often it makes things worse, but always God remains present. The negative is both the problem and the solution to the problem at the same time. We actually need the negative, because it is the only thing powerful enough to force us to change and grow, the condition of possibly for something truly new to emerge. The negative is how we learn to face our problems and tell the truth about our lives. The negative is both what is killing us, and what irrupts in new life. Anytime we resort to scapegoats or silver bullets (or claim God has removed God’s presence), we have reverted to a purity code, and left the Christian story behind.

Sadly, American Christianity is often too infected with individualism, consumerism, and nationalism, too steeped in latent Puritanism to imagine a world without scapegoats and silver bullets, even though the most dramatic event in Christ’s life exposed the irrelevance of those things forever. It’s much easier to let our purity codes solve the tension, than to do the self-reflection necessary to admit we are part of the problem; that the problem lives inside all of us as persons and as a society. To admit our own complicity in the brokenness of the world takes long, slow, painful soul-work. This kind of work is, frankly, too horrifying and excruciating for a people who have been conditioned to see themselves as good, and on the right side of everything. 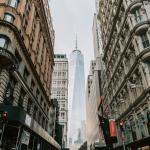