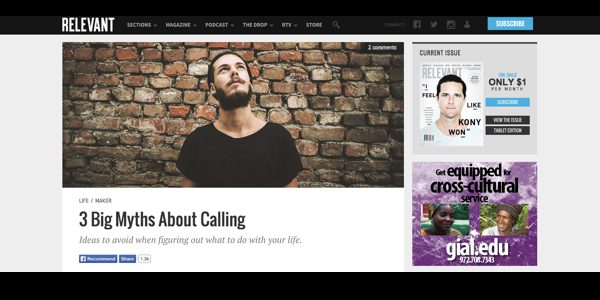 Let me start by confessing a pet peeve: I believe that the combined Jewish and Christian traditions express the most profound wisdom ever contemplated by human beings. This stuff is deep, and you really shouldn’t handle it with marketing in mind. So when someone—usually a pastor-slash-writer-slash-musician with an appealing headshot and a self-composed bio—attempts to produce (and we’ve all had to do it), a list of “Three Great This,” or “Ten Ways to Do That,” I get a little twitchy, bracing myself for the brazen attempt to pass off contemporary cultural claptrap as ancient wisdom that will inevitably ensue.

Is anything so thoroughly cloying as Christian attempts to mimic culture?

I’ll allow that occasionally a “Three Kinds of This,” or “Seven Ways to That,” article will pleasantly surprise me. This was my hope when I clicked on the recent post from RELEVANT called “3 Big Myths About Calling: Ideas to avoid when figuring out what to do with your life” by Dan Cumberland. Some of this is great, but I want to lean on the major assumptions a bit, because I think there’s an important way in which they don’t hold up.

First, let me say I’m glad Dan Cumberland raises the question of calling. Many people lack any clear sense of calling in life, and this can be painful. Cumberland is right, the mere mention of the word “calling” can have some people breathing into a paper bag. It’s an important topic, so kudos for raising the issue.

Myth 01 Your Calling is a Job
This myth is spot on. Cumberland writes, “Your calling can be expressed in countless ways: In your job and outside of your job, but it is not the job itself. One needs to cover the rent, mortgage, food, clothing, and healthcare. Sometimes that means you have to work a J-O-B, and it may not be directly connected to what you view as your calling. We shouldn’t conflate job with calling. They are not always the same thing.

Myth 02 Your Calling is Somewhere Out There, You Just Have to Find it.
Do we need the lightening bolt? I’m with Cumberland. The sudden epiphany is rare, and too often involves emotional coercion (see also: church camp). Discerning one’s calling is a process of discovery. The question is, what kind of process?

I often tell parents, the worst thing they can do to their children is tell them they can be anything they want to be when they grow up. I don’t think God is looking for people who know what they want to do with their lives. God is looking for people who will listen for what God wants to do with their lives. That’s calling. It’s a process of discovery typically involving the kinds of vocational false starts that leave you scouring fine print for ways to defer payment on your student loans for yet another month.

The myth, Cumberland says, is that your calling is “out there somewhere.” He writes, “The self is close to home… it’s who you already are and who you are becoming… The real work is not in searching it out, but in learning to be your true self.”

The true self… this is where we part ways.

I’m all for the Thomas Merton, Richard Rohr ego beat-down in which we learn to subvert the “small self.” But, this idea that the true self lives somewhere deep inside you is the kind of pseudo-Platonic dualism which so pervades American folk theology that everyone just assumes it’s true. I mean, if Oprah said it then it must be true, right?

The problem is, it’s not true, and it’s not Christian thought. More than that it’s dangerous. I’ve seen many a family destroyed by a spouse’s search for the “true self.”

In Christian theology the self names not a thing, but a relationship. I can’t name a single careful philosopher or theologian who doesn’t work from this view. (I could name a lot of bloggers who do).

To make my case I point to: The classic philosophical statement from G.H. Mead’s Mind, Self, and Society (1934). Dietrich Bonhoeffer’s Doctoral Dissertation, Sanctorum Communio (1930). Karl Barth’s Church Dogmatics, Vol. 3 (1958). John Zizioulas’s Being as Communion (1997). Stanley Grenz’s The Social God and the Relational Self (2001). And Stanley Hauerwas’s A Community of Character (1981). That’s a Protestant Liberal, a German Lutheran, a Swiss Neo-orthodox, an Eastern Orthodox Metropolitan, a North American Evangelical, and a Texan… all saying that the relational self is our best explanation of what it means to be a person. My favorite iteration comes from Stanley Hauerwas:

“The self is fundamentally social. We are not individuals who come into contact with others and then decide our various levels of social involvement. Our individuality is possible only because we are first of all social beings. I know who I am only in relation to others, and, indeed, who I am is a relation with others. The ‘self ’ names not a thing, but a relation.” (Hauerwas Reader, 372)

Just as God exists as three persons in relationship, so we who are created in God’s image exist as relational beings. Your true self doesn’t exist somewhere deep inside you. The myth imbedded in Cumberland’s post is that it does. The self cannot be isolated from our environment or community without completely disintegrating the person. (Think of a human life in complete isolation… it’s dehumanizing).

What does this mean for the issue of calling? If the self is relational, then calling is first and foremost a matter of community. If you want to discern your calling, go to church.

It is only within the context of relationships with other Christ followers that we discern calling. In a world of individualism it is an act of menacing resistance to say: I don’t decide what to do with my life. I submit my hopes and dreams to my community and they help me to discern my calling, all of it under the direction of the Holy Spirit.

Personhood, and therefore calling is a gift from God that’s mediated thru community. We discover our calling not deep inside our own soul, but in relationship with others.

Myth 03 Your Calling is a Place of Obligation.
Cumberland disagrees. He says, “Your calling and life’s work are places of freedom. If it’s not freeing, then it’s not yours… If it’s in line with who you are and who you are made to be, it will always be life-giving.”

Somebody better tell the prophet Jeremiah this. “Lord, you tricked me into being a prophet,” he said, “and I let you do it!” Can you imagine telling the apostle Paul that calling isn’t a place of obligation… or Jesus in the garden sweating blood and begging for a calling that doesn’t involve a Roman cross?

Calling is all about obligation.

If Jesus is Lord, then my life is not just my life anymore. I have been bought with a price. Calling isn’t about self-fulfillment. It’s about the kingdom of God, and we join God’s kingdom the same way Jesus did: thru cross & resurrection. Or to put it poetically:

You have to lose,
You have to learn how to die,
If you want to want to be alive, okay? (Wilco – War on War, J. Tweedy)

Jesus’s call to every human being is to die to ourselves, and to our own need to feel fulfilled in our life, or to be successful. We have to learn to die because without a death, you can’t have a resurrection.

I don’t think this aspect of calling means life must be drudgery—there is a peace that passes understanding, and a kind of freedom in becoming a slave to Christ—but we have not been promised we’ll make it out of this life alive. The death rate still hovers right around 100%.

What we are promised is that God has our back. God won’t let us be destroyed. If we lose our life for his sake, we’ll find life that can never be taken away. Obligation remains an inescapable aspect of calling.

If this all leaves you feeling depressed, then watch Wilco throw down and you’ll feel better. 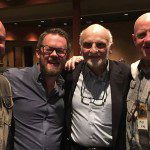 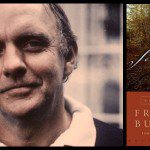 April 17, 2015 Everyday Sundays: Frederick Buechner on Why the Subdued Sundays of Eastertide are So Important
Recent Comments
3 Comments | Leave a Comment
"Thanks"
Richard Aahs Washington Post Article On Critical Race ..."
"Ignorant Socialists don't understand sarcasm and other forms of standard English. Sarcasm."
bill wald Why is Critical Race Theory So ..."
"Before reading this article I knew just a few of the points comprehensively put forth ..."
Cynthia Brown Christ Why is Critical Race Theory So ..."
"good article."
Brandon Roberts Washington Post Article On Critical Race ..."
Browse Our Archives
get the latest updates from
Paperback Theology
and the Patheos
Progressive Christian
Channel
POPULAR AT PATHEOS Progressive Christian
1