#TakeAKnee Has Made America Great Again

It’s been a diverting weekend for an interested outside observer of the American scene.

There’s been a lot to take in. North Korea is pretty sure Trump declared war with his “rocket man” remarks.  Yet another Republican Obamacare repeal looks poised to fail. Trump’s travel ban expired, to be replaced with a new one, leaving legal cases over the ban in limbo. And Puerto Rico, flattened by hurricane Maria, once again wondered what it takes to get the rest of the US to remember that they are Americans too.

But, for a variety of reasons, nothing has Americans worked up like Trump’s war on the NFL and the amazing overnight expansion of the #takeaknee protest initiated last year by Colin Kaepernick to express solidarity with and draw attention to the systemic discrimination faced by black Americans–particularly the deaths of unarmed black men at the hands of police. As Kaepernick said then about his urgency and conviction, “There are bodies in the streets.”

It stayed at a fairly low level with a handful of players here and there kneeling or standing near kneeling teammates in solidarity. It might have stayed small and fizzled out with time if it weren’t for the Presidents decision to use their protest to get his base riled up at a stump speech last week.

I’ve been a bit of a nuisance on Facebook today, chipping away at the reasons different people are upset over players kneeling, linking arms, or staying off the field during the national anthem. I dig into blanket statements and assumptions, question inconsistencies, and generally poke around to see if I can find some kind of first principle underneath all the rhetoric.

I’ve tried to hold my own first-gut-reaction opinions lightly and be open to other arguments. I like to try to understand where people are coming from.

However, in my efforts to understand, the sticking point is honestly the part where respect for a nationalist patriotic custom gets more attention and noise than innocent, unarmed black men being killed by police.

I understand that there’s a tradition of patriotism around the anthem and flag. I learned today that this tradition is deeper and has more layers of significance to it in the military community, which adopted the anthem before it was the national anthem. Some military people are especially upset because they have a sense of the flag and anthem being something you honour out of solidarity for the men and women who have fought under that flag. Their gut reaction is very understandable.

I also understand that there is a long and important history of the flag and patriotic symbols being consistently, time after time, placed secondary to the right to free speech. People have burned flags in intentionally disrespectful demonstrations in the US and their right to do so has been upheld by the Supreme Court. Y’all have a history that is VERY clear about the primacy of free speech over patriotism, which I think is probably understandable in a nation founded on treason and revolution. The US tolerates more anti-government speech than I think probably any other nation in the world because the first amendment is THAT important to y’all.

In that context, taking a knee or observing the anthem in private rather than on the sidelines is quite clearly not an act of disrespect to the anthem or flag. We know what those look like because the US has a history of them. The US has a history of people turning their backs during the anthem, burning the flag, flying the flag upside down in protest, and a whole range of violations of the flag code. These are all protected speech.

And I think Americans should be proud of that. Y’all should be proud that you have a nation where highly visible people can use their visibility to promote causes they care about.

Your freedom of religion is founded on that principle. Your right to assembly. Even your much-debated right to bear arms. And your freedom of speech. You were founded with the toolbox for dissent. America was founded with a protective mechanism against blind patriotism.

Yours is a nation that knew from the first that there are things more important than patriotism. America is greatest and most deserving of patriotism when she recognizes just that.

People of faith have always known there are higher goods and higher ideals than love of country.

Americans should be proud of a nation that set such high ideals at its founding that it is still working out how to live by them. A nation that explicitly placed the inalienable, natural rights of people over and above any authority on earth, even though these principles were more aspirational than actual.

“We hold these truths to be self-evident, that all men are created equal, that they are endowed by their Creator with certain unalienable Rights, that among these are Life, Liberty and the pursuit of Happiness.”

If we listen to what Kaepernick has been trying to tell us, we might see that “life” and “liberty” are still more aspirational than actual for many Americans.

#TakeAKnee has started a discussion about equality, ideals, activism, solidarity, and free speech.

All in response to a well-ordered patriotism, one which recognizes that America was never “great”–except in the loftiness and ambition of her dreams.

Every knee–or voice, or hand–placed in service of a solidarity higher than country brings that dream a little closer to reality. 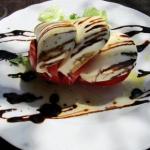 September 30, 2017 Bunny in a Dark Labyrinth: Trauma and Choice in a Playboy World (Guest Post)
Recent Comments
0 | Leave a Comment
"Apparently, there is. And not only “in an authentic, Christ-centered community”, but too many other ..."
HematitePersuasion Guarding the Sanctity of the Sick ..."
"Heh! It gets so that it feels sort of dangerous to assume you really understand ..."
Kate Cousino View from the Edge
"Good post! In some ways, we have traits in common . . . I think. ..."
billwald View from the Edge
"Some of the things that people call Christian aren't actually Christian.As for conservative Christian ideas, ..."
Jason Goatcher How Not to Do Spiritual Warfare
Browse Our Archives
get the latest from
Catholic
Sign up for our newsletter
POPULAR AT PATHEOS Catholic
1