What a fictional wizard taught me about fear, faith, and friendship

This is a post about a wizard named Harry, and a lesson I needed to re-learn.

(No, not the “you’re-a-wizard-Harry” you’re probably thinking of. A different wizard named Harry.)

I’ve been reading an urban fantasy series, the Dresden Files. Re-reading, actually. The joy of re–reading a familiar book is the mental space it creates for appreciating or critiqueing the author’s craft and depth (or shallowness) of insight. The first time around, I’m just enjoying the story. The second time around, I can think about why I enjoy it and what the author is doing. By the third time around, I guess I’m finally ready to think about what I’m getting from the book and what it has to teach me about myself.

So this morning I woke up thinking about the motivations of a couple of fictional characters. The titular character, Harry Dresden, is a wizard and a private investigator in Chicago. Echoing Marlowe and all the great noir detectives, Dresden is more than a little touched by the same darkness he stands against.

One of his friends is a Knight of the Cross–a holy warrior, essentially, whose mission is to counter the influence of a number of fallen angels. He’s also Catholic and deeply informed and motivated by his faith.

(The introduction of this character was interesting to me to begin with–the author is not, to my knowledge, a person of faith, and certainly not a Catholic. He gets some of the details of his angelology and theology wrong, but succeeds in making this Knight, Michael, a human, fully-realized character motivated by deep faith and conviction, without resorting to stereotypes or prejudice. As you’ll see momentarily.)

In the course of the books, Harry becomes tainted by the influence–the “shadow” or echo or imprint–of one of the fallen angels it is Michael’s task to oppose. He is so afraid of losing Michael’s respect and friendship should he learn that Harry is living daily with this spirit’s temptations that he avoids his friend.

But when he finally finds the courage to tell Michael his secret….nothing happens. Michael’s response to Dresden’s compromise with a dark influence is compassion and the offer of aid and friendship–not rejection or revulsion.

What Dresden has been told but obviously never understood is that Michael’s primary mission is not to kill or fight those marked by darkness–it’s to save them. With Michael, “hate the sin, love the sinner” is no empty platitude.

Michael’s convictions allow him to see souls worth saving in even those who become literally monstrous in service to evil. Every violent victory over the earthly allies of the fallen also represents a defeat, a soul who could not be reached.

It’s not hard for me to figure out why this bit of story-telling and characterization was at the forefront of my mind this morning. Last night, I spent several hours working on a draft of a post about the tendency of ideological communities to polarise.  This polarization leads to (and is fostered by) increasingly extreme responses to those perceived to be tainted by malign and dangerous outside influences. Relational complexities are waved away; association is endorsement, compassion is complicity.

I also tangled in the comments boxes on some Facebook posts over the justness of judging and ostracizing others based on their social media connections. Specifically, I’ve argued that while everyone has to make their own judgments about who they associate with, a lot of factors go into those choices, and characterizing them as black and white, me-vs-them value judgments is too simplistic.

This binary dichotomy is more or less the attitude Harry expects to encounter in Michael. He expects his association with the shade of a fallen angel to create tension and distrust, and a loss of friendship. He’s fought against the Fallen alongside Michael before, he’s fought against the shade’s temptations, and he has refused to free or ally himself with the actual fallen angel. But he doesn’t really expect Michael to appreciate any of these distinctions.

And can we blame him? Michael’s ability to still see and value the good of his friend comes from a depth of faith most of us don’t have. He is afraid for Harry rather than afraid of his proximity to darkness. When he tells Harry that he can be free of the presence and temptations of the fallen angel’s shadow, but he would have to voluntarily cease to exercise his magical powers–the power that is Harry’s primary tool to defend innocents and the powerless–he is offering him a choice, not an ultimatum. There’s no conditional attached.

Michael and Harry, of course, are fictional characters. My frightened FB friends are not. They may not be able to be all I want them to be. It may be unreasonable to hope for openness from those who feel threatened, and understanding from those who feel misunderstood.

As much as I would like to be like Michael Carpenter and rise above fear, I fall short of the mark. Fear is everywhere. It might be genuine concern and principal that motivates me to argue against false dichotomies and ideological purity tests, but it’s fear that makes me dig in my heels to argue the point against a friend–fear for them and of them, fear of losing friends to the extremes, of being counted an enemy where I was once welcomed as an ally. Of being left to stand alone.

I cannot compel my friends to lay down their defences to avoid the dangers I see accompanying them. I can only present my case and allow myself to be challenged to live accordingly.

I’m not wizard or knight, and my influence and power are small. I feel vulnerable; I get scared. Whoever else I write for, whatever power or inspiration you, my reader, may find in my words or ideas, the most important test is whether my ideas have the power to inspire and challenge me.

I hope I am able to pass that test, when it comes to the final tally. 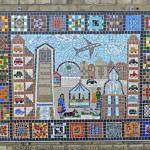 April 20, 2018 The Romantic Myth of the Ethno-National Underdog
Recent Comments
0 | Leave a Comment
Browse Our Archives
Follow Us!