Going to Church in Exile..or Why Denominations Still Matter

As I have moved farther and farther away from the Independence, Missouri headquarters of the Community of Christ (RLDS church) over the past decade, I have attended increasingly smaller congregations. First, it was church with 30 people in Iowa City during grad school. Then it was church with 20 people in Worthington, Ohio when I took my first academic job. Third, it was church with 15 people in Freeport, Maine. And now, I live in an area of upstate New York without a Community of Christ congregation—the nearest one is two and half hours away in Connecticut. Consequently, I have been a constant visitor among the congenial and progressive Methodists in Saratoga Springs. But something has been lacking.

Don’t get me wrong. The services at my new UMC congregation are wonderful. The pastor preaches thoughtful, challenging sermons filled with themes of social justice, inclusivity, and Jesus. The organ music is rather amazing. The people are friendly. And there is good mix of young and old.

What, then, has been missing? Well…I could rattle off a long list, but for this column I’ll just highlight one primary area: key texts and their concomitant ritual enactments. The Community of Christ follows the Revised Common Lectionary, as does the Methodist church, but it supplements each weekly theme with scripture from the Book of Mormon and Doctrine and Covenants. The resulting Community of Christ worship experience includes texts and rituals both familiar and strange to a Methodist context. But what difference does this make?

Part of the joy of being in a Community of Christ congregation is to speak a “language” that cannot be shared outside of it. This is true, I would argue, for Americans in any religious community, whether it be Unitarians, Reform Jews, or non-denominational evangelicals. As a Community of Christ member, I enjoy hearing someone refer to King Benjamin’s sermon in the Book of Mormon, make a uniquely RLDS reference to “Zion,” or say the Community of Christ communion prayer. I like the rituals and recitations that I’ve heard all of my life. They constitute a shared language, even a grammar of devotion. In “exile,” those texts have been missing…or so I thought.

One Sunday last fall, I sat in a Methodist Sunday School classroom with a group of mostly retirees, watching a DVD with them. A two-dimensional image of Amy-Jill Levine rapidly told the class about Lazarus, Mary, and Martha. While I was interested in the topic, I was tired from a long week, and I was not following Levine’s rapid-fire delivery. I glanced at a book shelf beside me and stared at the musty books, and then back to the television. And then I did a double take. On the shelf was a reprint of a 19th century RLDS/Community of Christ book. Surprised, I scanned the shelves around me and saw several dozen RLDS books scattered among popular Christian devotional texts. “How on earth did these books get into a Methodist library?” I wondered. “And how did I not see these until now?” I had been going to the class for a couple of months, sat in the same place every week, and never noticed the books. As the class began a discussion of Levine’s presentation, I grabbed one of the books and paged through it, and then another. Finally, I came across a name in the front of an RLDS hymnal. My face brightened. Kenny Green, an RLDS bishop, had once owned the now tattered books.

I took a photo of the books and posted it on Facebook, tersely narrating my experience. Soon friends from my past congregations began commenting on the photo. “I knew him [Green] at the time he retired in Independence,” wrote the father of my best friend from childhood. “He told me then he was moving to Saratoga Springs,” he continued. “Ken Green is a long time family friend (1957) that moved from there [Saratoga Springs] about 5 years ago and now is in Waukee, Iowa,” wrote another friend who had gone to church with me in Ohio. “Kenny was a missionary in NW Ohio in the late 50’s or early 60’s. He, along with his wife, Shirley and son, Kenny lived in Toledo. …great family!” wrote yet another friend from my old Ohio congregation. The mystery of the books was beginning to be solved. And something of home had been restored.

As I reflected on this idiosyncratic experience, I felt that something could be said more generally about the power of individual denominations in contemporary American life. To put it simply, denominations and the particular kinds of doctrines, texts, and rituals that they produce (and the relationships those elements bind together), still matter in contemporary America. My personal story provides both confirmation and qualification to this point. First, the qualification: I attend a liberal Methodist church and find much of it congenial to my experience in the Community of Christ. If the texts that I miss really mattered that much, I could attend the LDS ward in my city or drive 45 minutes to attend church with two Restorationist families (conservatives who left the RLDS church when women were ordained in the 1980s). However, I would rather be among religious progressives than meet with people who often use my tradition’s religious texts to enforce patriarchy and heteronormativity. My beloved Mormon texts are just not the same when I hear them read through a fundamentalist/conservative lens. Seen another way, the “how” of reading might even matter more than the “what” of reading. Such a statement gestures toward a truism to which many scholars point: the most important divisions within contemporary American Christianity fall along the liberal/conservative axis rather than denominational lines.

Read in another way, my experience confirms that denominations, at least for some, still matter. Catholics and Mormons are unusually loyal to their denominations, and, even in a much more Protestant-like Mormon denomination, I also bear evidence to that. To even feel like I am going to church in exile means that I have some structuring notion of a denominational “home.” As anthropologists Simon Coleman and John Eade contend, for many contemporary individuals in Europe and America, home has come to mean “routine sets of practices, rather than fixed places.” [1] Denominations offer these routine sets of practices (among many other things) to individuals, and thus offer portable, non-geographical homes. Denominations offer social networks that are more durable than many other voluntary organizations, too. Denominations rather effectively pass along particular values to individuals  and offer them intergenerational friendships that find few parallels in other contemporary voluntary organizations. Denominations are enormous producers of social capital in local communities. And the list could go on and on. Of course, there is much more to study in contemporary religion in America than asking questions about the power of institutions. However, all of this does not abrogate the notion that denominations still matter in contemporary American culture, even if not to the same extent as they once did.

What do we risk if we ignore denominations? Religious studies scholar Laurie Maffly-Kipp has recently written, “Our [scholars’] own concepts of individual identities and selfhood as the preeminent concerns of religious subjects block us from—dare I say it—recognizing the profound ecclesiastical pleasures and collective commitments of historical agents.” [2] Maffly-Kipp warns religious studies scholars that they may be ignoring important parts of the historical individuals that they study—namely the involvement of these historical actors in and identification with particular churches. I would extend this to not just our study of the past, but also our study of the present. Even in an age that is seeing a sharp decline in the power of the denomination as an organizational structure, it still matters in profound ways to a tenacious minority of religious Americans. What holds these Americans, what drives these exiles, is just as worthy of study as the stories of a growing number who find liberation through “no affiliation.” Denominations, like the mute books beside me that I had failed to see week after week, are “texts” in plain sight that beg once more to be opened and studied.

April 15, 2014 The Faith of Our Fathers
Recent Comments
0 | Leave a Comment
Browse Our Archives
Related posts from Peculiar People

Latter-day Saint
A Review and a Farewell: Of Manuscripts and...
Peculiar People 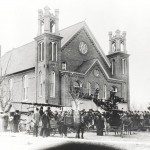