Wait, What Is The White Horse Prophecy?

Americans rarely unilaterally agree on anything, but there has risen one important break from that trend; we’re all convinced that the 2016 election is next level bonkers. All of us. Including, apparently, Mitt Romney.

As of this post, Romney is posed to make a big speech at the University of Utah tomorrow morning, which has some eager politicos wondering if he’s making some sort of play as a late addition to the race, a wishful thought for anyone feeling hopeless after Donald Drumpf’s dismal sweep on Super Tuesday.

In Mormon circles, the term “White Horse Prophecy” has already been tossed around, referring to the supposed statement by LDS Church founder Joseph Smith Jr. that one day “the Constitution will be hanging by a thread” and that a political hero will sweep in and save the republic on a white horse. Or something. It’s actually not really clear, because there’s some doubt over whether Smith actually made such a prophecy. Joseph F. Smith, for instance, called it “ridiculous” and the official line from Church is that its origin is disputed and it has no basis in actual doctrine.

Still, it’s interesting that for the moment, all eyes are once again on Romney. It certainly says a lot about the current state of the race that we’re all eagerly anticipating the likely unimpressive words from a guy we’ve already decided isn’t really leadership material. Maybe it’s one last death rattle for the Mormon Moment, or maybe Romney is just going to give us all one big “I told you so” lecture about what could have been had we just elected him instead of re-electing Obama. Or maybe he’ll endorse Bernie Sanders. Or maybe he’ll just cry.

Thing is, I don’t take much stock in the White Horse Prophecy, and neither should anyone else. Mitt’s moment has come and gone. But if he wants to go toe-to-toe with Donald Drumpf for one last encore of political theater, more power to him. 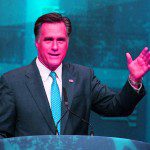 March 4, 2016 Release the Romney
Recent Comments
0 | Leave a Comment
"Season 4 of Fargo--where Timothy Olyphant plays the Mormon lawman Deafy and Chris Rock plays ..."
xert Mormon ‘Niceness’
"I pretty much wrote the exact same thing about my husband's "bachelor name" back in ..."
Brita Long No, I Did Not Keep My ..."
"I just watched some footage of him. I believe you might be literally right.https://www.youtube.com/wat..."
Wubbsy Jon McNaughton, the Obama Era’s Most ..."
"Funny that he chose to draw Obama when going away and goofing off on a ..."
Wubbsy Jon McNaughton, the Obama Era’s Most ..."
Browse Our Archives
get the latest from
Latter-day Saint
Sign up for our newsletter
Related posts from Peculiar People