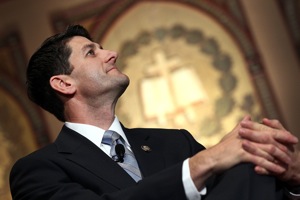 Paul Ryan has inserted the obscure term “subsidiarity” into the public conversation as justification for, among other things, cutting food stamps. Catholics can disagree about how the concept applies to individual circumstances, of course, and he’s got good points, but I want to dip into the conversation that has been going on for over a century within the Catholic Church to show what is generally understood about it, and how, I believe, Paul Ryan is abusing it.

In a nutshell, subsidiarity, a concept found in Catholic social teaching and the European Union charter, says that control should operate as close to the individual level as possible. In Catholic teaching (where it originated), it is rooted in another Catholic principle, “dignity of the human person,” and says all organizational forms — family, local government, federal government — ultimately serve the goal of a person fully expressing their potential. “Negative subsidiarity” says structures shouldn’t impede this expression. “Positive subsidiarity” says government should do what it can to create an environment where it can happen.

The negative version is common across the political spectrum, except among state socialists and totalitarians. It’s echoed in the familiar environmentalist mantra and bumper sticker, “Think globally — Act locally” and in the conservative emphasis on Main Street mom-and-pop businesses. It’s close to my own heart — my political roots are libertarian and bioregionalist, and I often favor local, decentralized approaches where feasible.

The beginnings of subsidiarity

The concept of subsidiarity emerged in Catholic teaching in the 1891 encyclical Rerum Novarum from Pope Leo XIII. Warning against both unrestrained capitalism and communism, he argued strongly for workers’ rights and labor unions. In it, he said:

If citizens, if families, after becoming participants in common life and society, were to experience injury in a commonwealth instead of help, impairment of their rights instead of protection, society would be something to be repudiated rather than to be sought for.” (Rerum Novarum, 20)

Libertarians happily stop there, but the very next section says:

If a family perchance is in such extreme difficulty and is so completely without plans that it is entirely unable to help itself, it is right that the distress be remedied by public aid, for each individual family is a part of the community. (Rerum Novarum, 21)

The question then moves not to whether such help is valid, but in which cases. What constitutes “extreme difficulty” and when is a family “entirely unable to help itself”? This should be the bounds of the debate.

The concept was expanded in 1931 by Pope Pius XI in his encyclical Quadragesimo Anno, in response to the rise of totalitarianism, in which he said,

It is an injustice… for a larger and higher organization to arrogate to itself functions which can be performed efficiently by smaller and lower bodies. This is a fundamental principle of social philosophy, unshaken and unchangeable. (Quadragesimo Anno, 5)

Of its very nature the true aim of all social activity should be to help members of the social body, but never to destroy or absorb them.

Thirty years later in Mater et Magistra, Pope John XXIII shifted the emphasis back to helping. He said unequivocally that it is the proper role of “public authority” to:

reduce imbalances which may exist between different branches of the economy or between different regions within the same country or even between the different peoples of the world, … for limiting fluctuations in the economy and for providing effective measures to prevent the recurrence of mass unemployment. Hence the insistent demands on those in authority — since they are responsible for the common good — to increase the degree and scope of their activities in the economic sphere, and to devise ways and means and set the necessary machinery in motion for the attainment of this end. (Mater et Magistra, 54)

After establishing the need to help, Pope John invoked subsidiarity as a restraint on government intervention in an individual’s life, saying government actions must:

augment his freedom while effectively guaranteeing the protection of his essential personal rights. Among these is a man’s right and duty to be primarily responsible for his own upkeep and that of his family. Hence every economic system must permit and facilitate the free development of productive activity. (Mater et Magistra, 55)

Modern fiscal conservative Catholics using the term subsidiarity are generally thinking of its expression by Pope John Paul II, who was warmer to capitalism than the popes that preceded him. He linked the negative form of subsidiarity specifically to criticizing the welfare state saying in 1991:

It would appear that needs are best understood and satisfied by people who are closest to them and who act as neighbours to those in need. It should be added that certain kinds of demands often call for a response which is not simply material but which is capable of perceiving the deeper human need. One thinks of the condition of refugees, immigrants, the elderly, the sick, and all those in circumstances which call for assistance, such as drug abusers: all these people can be helped effectively only by those who offer them genuine fraternal support, in addition to the necessary care. (Centesimus Annus, 48)

In that context he said:

The principle of subsidiarity must be respected: a community of a higher order should not interfere in the internal life of a community of a lower order, depriving the latter of its functions, but rather should support it in case of need and help to coordinate its activity with the activities of the rest of society, always with a view to the common good. (Centesimus Annus, 48)

Heavy-handed government intervention can be frustrating and dispiriting. As an example, I lived in rural Maine when the new wetlands protections went into effect in the early 90s. As a member of the local zoning board, I saw from the inside how, at times, nationally defined rules made zero sense when implemented at the local level — and even when they did, sometimes the feeling that they came from far away and didn’t respect the individual’s circumstances was infuriating. One neighbor built a harmless shed for his boat next to his house which was in a wetland zone, only to find out he couldn’t build any structure with a foundation without an approval process first, so the shed was torn down. Everyone involved loved the environment and wanted to protect it, and everyone knew this was ridiculous. But down the shed came. He didn’t bother to go through the bureaucratic process and rebuild. But that was a failure to allow for flexibility in local implementation. It doesn’t contradict the role of the government to decide that protecting wetlands is essential.

The missing piece in Ryan’s subsidiarity

The key point here is Pope John Paul’s phrase, “in addition to the necessary care.” He did not say that no aid should be given. Rather, he cautioned that financial aid alone would not solve social problems where a “deeper human need” must be addressed for it to be effective, and that understanding that need and responding to it effectively is done best by “people who are closest to them.” Who could argue with this?

What’s missing from Paul Ryan’s interpretation of subsidiarity is the question of which decisions are rightly kept local versus the government’s legitimate role — perhaps obligation — in helping those in “extreme difficulty.” Many fiscal conservatives adhere to the strict view of the federal government as responsible only for national defense and regulating interstate commerce. But this is not supported by a full reading of any Catholic teaching on the subject from the past hundred years.

An implementation of subsidiarity consistent even with John Paul’s generous interpretation would be for the government to define the required goals — no one in America starves for lack of access to food, for example — and provide the funds, while leaving as much control as possible in local hands, focusing on empowering the individual and never imposing a rule that humiliates or unnecessarily limits their freedom.

In the food stamp program, for example, this might argue not for a cut or a workfare requirement, but for adding training in nutrition and community gardening.

A reader objecting to my earlier piece on Ryan rightly pointed out that he does not reject the safety net entirely, that his proposed budget has plenty of social spending. How much of that is the result of his personal views and how much the result of political reality, I don’t know. The pure Randian view is that society has zero responsibility to help the needy — the “takers” — but rather only the productive — the “makers.”

The current pope, Benedict XVI, has infuriated many conservative American Catholics by not being as fiscally libertarian as they expected him to be. (It’s worth remembering that he was one of the early architects of Vatican II before he broke with it.) In a 2008 talk, he brought the focus of subsidiarity back from John Paul’s pro-capitalist leanings to a more positive plane:

For Benedict, the social safety net is a given. In his first encyclical in 2005, Deus Caritas Est (God is Love), he cautions that:

“As Augustine once said, a State which is not governed according to justice would be just a bunch of thieves.” (Deus Caritas Est, 28)

And goes on to say that:

“Politics is more than a mere mechanism for defining the rules of public life: its origin and its goal are found in justice.”

Benedict never suggests that government support should be held back. Further, he insists that the driving principle of government is not as legal arbiter but as cultivator of justice. While assuming the government is helping, Benedict encourages an abundance of charitable activity, and together they answer both the physical needs and the “deeper human needs” of which John Paul spoke. I am not hostile to the libertarian skepticism about government’s ability to solve problems — of its tendency to become “just a bunch of thieves” as Augustine put it. But to use the principle of subsidiarity as a justification for not doing everything possible to feed the hungry seems to be a perversion of Christian teaching. 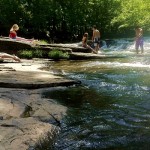 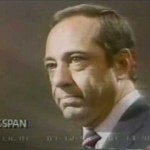 Halloween Is A Celebration of Change,...
Thoughts of a Modern Celtic Wanderer
Related posts from On the Way