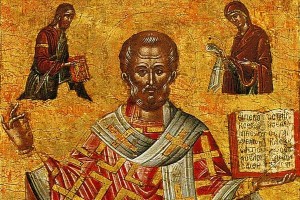 One of the numerous unrelated story lines from different traditions that runs through the Christmas season is that of Santa Claus. December 6 is the feast day of St. Nicholas, honored in the Roman Catholic, Anglican, Lutheran and some other Protestant churches. (Eastern Orthodox celebrate his feast on December 19.)

St. Nicholas or Nikolaos was the bishop of Myra, a Mediterranean port in Lycia on what is now the southern coast of Turkey — very far from the North Pole. St. Paul crossed this region and likely stayed in the town on several occasions (Acts 21:1, Acts 27:5) and some records suggest there was a Christian church presence there before A.D. 95.

Almost nothing is known about the historic figure of St. Nicholas, but his legend grew over the centuries. He was bishop of Myra in the first half of the 300s. He was imprisoned by the Romans for a while but released. He lived into his 70s.

Less certain but likely is that he was orphaned at an early age from a rich family, and cared especially for poor and orphaned children. In the realm of legend is that when he decided to join the church and in following Christ give away his family wealth, he did so by tossing small bags of coins to the poor as he went by. Another legend has him providing financial support to young women to help keep them from lives of prostitution.

It wasn’t until the late Middle Ages in northern Europe — Germany, Switzerland, Alsace-Lorraine and the Netherlands — that this legend of St. Nicholas giving away little bags of coins developed into the idea that in the wee hours of his feast day, December 6 (which is actually the anniversary of his death, so his ghost, I guess), St. Nicholas would deliver gifts to children secretly. So the kinder started leaving out their shoes the night before, to find small toys and bags of coins in them the next morning.

The legend of Santa Claus owes a lot to the pagan legend of Odin. I mentioned Yule, the Germanic winter solstice festival, in my earlier post about Advent and other new year’s holidays. Yule gave our current Christmas a number of its trappings. During that holiday, which happens at the same time as Christmas, Odin would ride through the sky with his hunting party; children would put out carrots and sugar cubes for Odin’s flying horses and be rewarded with small gifts. It’s possible that in Northern Europe this legend merged with the St. Nicholas legend of giving away small bags of coins to poor children, giving us a Santa Claus flying through the sky with magical reindeer, landing on people’s roofs, finding snacks left for him and his reindeer, and leaving behind gifts for the children in shoes or stockings.

In Dutch culture, Sinterklaas is undeniably St. Nicholas, wearing a bishops vestments, but the mixing of stories is murky and takes a nasty turn. While it has this bishop riding through the sky and distributing gifts, it adds the idea of a book with notations of which children were nice and which were naughty. The nice ones got gifts. The naughty ones risked being thrown in jute bags by Sinterklaas’s helper — originally a devil, later the legend took on racist tones — and stolen away!

Our current conception of Santa Claus as a fat and jolly old man and many of the details we assume are ancient legend seem to be rooted in the poem “A Visit from St. Nicholas” better known as “‘Twas the Night Before Christmas,” written in 1823 by Columbia professor Clement Clarke Moore, a New Yorker inspired by the local Dutch culture and its legend of Sinterklaas. More on that poem in a later post.

One final note: Despite the fact that the fur-trimmed costume we associate with Santa Claus seems fitting for the North Pole, it’s really just a stylized fancy bishop’s outfit. Pope Benedict — always the fashion plate — created a bit of a stir a few years back when he appeared in public sporting a camauro, the fur-trimmed type of bishop’s hat on which Santa’s is based, which has fallen out of fashion for being considered too showy. 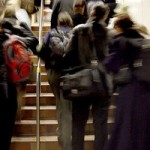 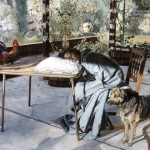 8 Things Christians Need to Stop...
All Set Free
Related posts from On the Way