My response to “Why I Hate Religion, But Love Jesus” named one of Busted Halo’s Best of 2012 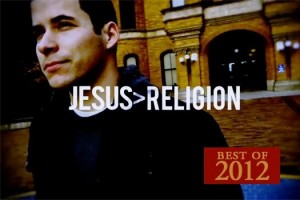 I’m happy to report that Busted Halo just named my response to Jefferson Bethke’s viral video “Why I Hate Religion, But Love Jesus,” which I wrote for them in February, as one of their “Best of 2012.” It was also the most read post of the year there.

(In case you’ve never seen the original video, I’ll add it at the bottom. Bethke’s main point is that Jesus was and would be against organized religion. He also spends a lot of time talking about the harm done by organized religion.)

Apologetics isn’t my thing. I’m certainly not focused on defending the institutional Church. But I was frustrated with many responses to the video I’d already seen, and felt they were missing the points that mattered most to me. Some tried to rebut Bethke’s arguments on his terms. Others took an exceptionalist angle (“our religion has the better answer; here’s how.”) And some atheists were happy to agree with Bethke that religion sucked, while sidestepping (or not knowing) the fact that he’s a Calvinist, from Mark Driscoll’s congregation in Seattle, Washington. (Though perhaps you can’t blame them for not knowing, as that fact was intentionally hidden.) I took at different angle:

You’re experience is real, without a doubt. And I honor that. You are speaking from hurt. Your encounters with religion, as given to you by parents and authority figures, were messed up. And there’s no question that Jesus devoted a lot of attention to denouncing those types of religious behavior and expression. But the religion that hurt you or disappointed you is not all organized religion.

belief that there’s something more than this material world; a set of ethics and moral guidance; and rites and shared rituals. Different organized religions put emphasis on one or another of the three, but each is a mixture of them all. Ritual without the spiritual dimension is bereft and can be dangerous. Law without the spiritual dimension is at best difficult to maintain, at times punitive and harsh, and can be offensively hypocritical. What you’re railing against is an experience of organized religion that was empty ritual and harsh hypocritical law. So you’re not criticizing religion; you’re criticizing an expression of religion that doesn’t live up to the definition. I’ve had encounters with religious expressions like that. But I also know beautiful, amazing expressions of religion that are overflowing with love.

I also talked about how a religion “on the ground” is made up of flawed people who will produce flawed results.

We can debate over how much or how little hierarchy a religion should have, but it’s always made up of people. And it is not when leaders are imperfect but when they lack the humility to remember they’re flawed humans that much of the trouble comes.

Some of the comments on my original post had to do with the definitions of words: “religion” vs. “a religion”; “religion” vs. “spirituality.” Some felt that by defending the concept of organized religion I was dismissing spirituality. This is an ongoing and interesting discussion that takes place both inside and outside of organized religious groups.

Obviously it’s all the rage nowadays to talk about the “nones” — whether they really mean it and how to coax them into churches — and if there’s one thing I’d change in rewriting the piece today, it would be to spend more time honoring the emotions behind it. I did, but I’d do a lot more. By responding with a defense of organized religion, I lost three-quarters of my audience right there. Clearly, while Bethke’s own agenda may have been misrepresented, or perhaps unintentionally incorrectly communicated, it struck a nerve.

But I also need to speak from my own experience. And in my life, raised as an atheist without any baggage of a religion associated with my parent’s authority, organized religion has been mostly a good thing. It has certainly never harmed me. So while I can honor other people’s pain, I can’t identify.

That said, I still think the best approach for everyone is to build up what’s good, not gripe about what’s flawed. That’s what I am doing every Sunday (and throughout the week) as a congregant at St. Lydia’s — helping build and conceptualize organized religion in a different way.

I’ve already written more than I meant to. This post was just going to be a quick note about my old column getting that nod. But there are obviously a number of threads to continue. I look forward to the conversation.

Again, if you haven’t seen it, here’s Bethke’s original video: 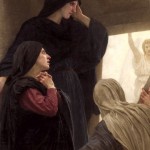 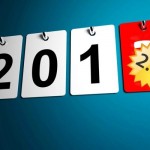 Evangelicals Are Attracted to Conspiracy Theories—Why?
Divergence
Related posts from On the Way