1.  In yesterday’s Morning Report, I referred to the story of four boys aged 9-13 who bound and raped an 8-year-old girl in a community of Liberian refugees in Phoenix, Arizona.  Stories like this are always horrible, but what is especially noteworthy in this case is the reaction of the parents, who blame their daughter and feel as though she shamed them.  The girl left her home to go to a party, was lured into a storage shed with the promise of bubble gum, and was then bound and assaulted for 10-15 minutes.  According to authorities, “the girl’s parents said they blame their daughter for the assault and for bringing shame on her family.”  A relative disputed that claim, but would not (or could not) explain why.  And when the father of the girl was asked what should happen to the boys, he said “Nothing.”  The report goes on:

Femi Barbarinde, an African Studies professor from the Thunderbird School of Global Management, said it is normal to feel shame because of a rape in the family in the Liberan culture.  ‘They may be reacting to the attention that this will get and the knowledge of this within the community that could be a source of embarrassment.’

This is an issue that always bends postmodern feminists into pretzels.  On the one hand, rape is one of the worst things one human being can do to another, a crime against humanity and a crime against women.  On the other hand, the postmodern feels as though he or she cannot judge another culture.  I remember well one class discussion at Harvard where a female student, every inch a committed feminist, but also thoroughly postmodern in her thinking, could not bring herself to say that rape is universally wrong.  If all values are culture-specific, how can one make a trans-cultural value judgment?

The doctrine of sin provides Christians with a universal basis for moral evaluation.  All people are sinful, and I must judge myself before I judge another; I must always recognize my own sinfulness, must hold this sinfulness before me and ask how it obscures my vision; yet I should never surrender the responsibility to discern between what is right and what is wrong.  Different cultures not only have different strengths and weaknesses; they have different besetting sins.  The fact that our culture has its own besetting sins (rampant materialism and commodification of female bodies among them) does not prevent me from recognizing, and speaking out against, the besetting sins of other cultures.  This does not mean that our culture is superior (although I do not reject out of hand the possibility that some cultures are indeed better than others), but it does mean (and I make no apologies for this claim) that our culture has come to a clearer vision of the rights of women. 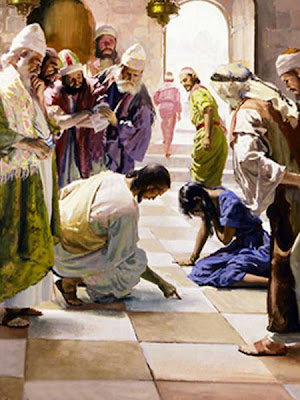 I’m sure the parents are hurting for their daughter; they are human beings, a mother and a father, and of course they love her.  May God enable them to see past a besetting sin of their culture.  I think of Christ’s response when an adulterer was dragged before him, and I wonder what he would say to the poor little girl who has suffered so horribly.

2.  Barack Obama’s approval ratings, for the first time, have fallen beneath 50%.  This is not good news for Obama, certainly, but it’s not terrible news either.  Yet it’s not terrible news, either.  Public opinion is fickle.  The vision of him in the popular press is still overwhelmingly positive–he is winsome, intelligent, eloquent, self-controlled, etc.–and his political operation is extremely effective.  The public is disposed to like him, and will do so again if they are given adequate reason.  Bush’s approval ratings had dipped below 40% not long before his reelection; once he got back on the campaign trail, he won back favor.

Still, three things have changed.  Each will lead to greater difficulty for the Obama administration, and yet they may serve both America and Obama for the best in the long run.  See my next post for an explanation.

3.  Even more meaningless is a poll showing that 53% of Americans view Sarah Palin unfavorably.  Palin has been assaulted relentlessly in the press, of course, and has performed far better on the stump than in interviews.

The ABC News/Washington Post survey suggests that there is doubt about Palin’s leadership skills and her understanding of intricate issues. Fifty-seven percent say they don’t think Palin understands complex issues, and 54 percent do not feel she is a strong leader.

Palin intends to campaign around the country for candidates who reflect her values, and this suggests to many that she intends to run for President in 2012.  If this is so, one has to wonder whether she had a finger in the wind and began to feel as though Obama is not a lock for reelection.  Her recent opinion piece in the Washington Post (Senators Boxer and Kerry posted a rebuttal today) is only the first installment in what would have to be a long series of efforts to gain credibility as a person with intellectual heft who can address national issues.  (For entertainment’s sake, read Art Brodsky at HuffPo, since he is apoplectic that Sarah Palin can land real estate on the Washington Post opinion page and he cannot.)

4.  Rahm Emanuel still vows that health care reform will receive an up-or-down vote before the August recess.  In fact, in spite of the Skip Gates profiling kerfuffle, health care reform continues to dominate the opinion pages.  Three are especially noteworthy today.  Paul Krugman again bashes the Bush administration (he never stopped, actually) and presents the dichotomy that we either take Obamacare or else we maintain the status quo ante.  Obama offers a blue pill and a red pill:

Well, in the case of health care, one pill means continuing on our current path — a path along which health care premiums will continue to soar, the number of uninsured Americans will skyrocket and Medicare costs will break the federal budget. The other pill means reforming our system, guaranteeing health care for all Americans at the same time we make medicine more cost-effective.

Peggy Noonan is fascinated to watch what may be Barack Obama’s first significant public defeat.  The reason he’s failing, she argues, is because Americans are asking and answering basic questions for themselves:

The problem isn’t that they didn’t “bend the curve,” or didn’t sell it right. The problem is that the national mood has changed since the president was elected. Back then the mood was “change is for the good.” But that altered as the full implications of the financial crash seeped in. The crash gave everyone a diminished sense of their own margin for error. It gave them a diminished sense of their country’s margin for error. Americans are not in a chance-taking mood. They’re not in a spending mood, not after the unprecedented spending of the past year, from the end of the Bush era through the first six months of Obama. Here the Congressional Budget Office report that a health care bill would not save money but would instead cost more than a trillion dollars in the next decade was decisive. People say bureaucrats never do anything. The bureaucrats of CBO might have killed health care.

And Charles Krauthammer, himself a former physician, disputes the notion that the best way to control costs is to eliminate unnecessary procedures.  The reason doctors order so many tests, he says, is to protect themselves against a broken tort law system:

This is not about politics? Then why is it, to take but the most egregious example, that in this grand health care debate we hear not a word about one of the worst sources of waste in American medicine: the insane cost and arbitrary rewards of our malpractice system?

When a neurosurgeon pays $200,000 a year for malpractice insurance before he even turns on the light in his office or hires his first nurse, who do you think pays? Patients, in higher doctor fees to cover the insurance.

And with jackpot justice that awards one claimant zillions while others get nothing — and one-third of everything goes to the lawyers — where do you think that money comes from? The insurance companies, who then pass it on to you in higher premiums.

But the greatest waste is the hidden cost of defensive medicine: tests and procedures that doctors order for no good reason other than to protect themselves from lawsuit. Every doctor knows, as I did when I practiced years ago, how much unnecessary medical cost is incurred with an eye not on medicine but on the law.

Tort reform would yield tens of billions in savings. Yet you cannot find it in the Democratic bills. And Obama breathed not a word about it in the full hour of his health care news conference. Why? No mystery. The Democrats are parasitically dependent on huge donations from trial lawyers.

6.  Rick Reilly, arguably America’s most famous and decorated sports writer (he used to win the Sports Writer of the Year on an annual basis), takes Tiger Woods to task for the four-letter tantrums he throws on golf courses when he makes a bad shot.  Not watching golf that often, I assumed when I saw that headline that he was being facetious–rather like condemning Barack Obama for being so goshdarn excitable.

Tiger Woods was once a casual friend of mine, since we lived across the hall from one another when we were both freshmen at Stanford; since I too was a varsity athlete (gymnastics), we talked about the sports department and how we should come to watch one another’s competitions.  Obviously our athletic careers have taken different paths (ahem…excuse me, sometimes understatements make me cough).  I remember him as a nice enough fellow who had an expensive stereo and traveled often.  He gave me a few tips on my golf swing once.  I’m proud of all he’s achieved, and I understand the fierce competitiveness and severe self-criticism it takes to succeed at the highest level.  Yet Reilly is right; this is disappointing.

It goes to show how being indulged can stunt a person’s growth in character.  Would *you* tell the richest and most powerful athlete in the world that he needs to grow up?  Perhaps you would–and if so, Tiger needs someone like you in his life.  “Yes men” are unhealthy for the soul.  Kudos to Rick Reilly for having the guts.