It’s always a pleasure to post a piece from the terrific Pete Wehner, whose sojourn has led him through three Republican presidential administrations, to the Ethics and Public Policy Center, and now to a position as a contributing opinion writer for The New York Times. Full bio below.

A recent Washington Post story on gay marriage and evangelical Christianity describes some of the splits that are emerging. (Tony Campolo, a liberal evangelical leader, and former Christianity Today editor-in-chief David Neff declared their support for same-sex marriage.)

The article quotes Albert Mohler, president of the Southern Baptist Theological Seminary, who said, “This issue [gay marriage] will eventually break relationships: personally, congregationally and institutionally.” He referred to this as a “crucial moment,” adding, “There’s not going to be any way around it.”

It’s not clear whether Mohler, whom I’ve had cordial exchanges with in the past, was being descriptive or prescriptive in his comments. Whatever the case, I find the notion of breaking relationships over the issue of gay marriage to be quite unfortunate. Not because I don’t understand the theological point of view of Mohler. He believes, like most evangelical Christians that gay marriage can’t be reconciled with biblical teaching and that for the church to embrace same-sex marriage would be to undermine biblical authority. I understand, too, that this issue will have the effect of causing some churches to leave denominations because they feel a fundamental breach has occurred. There are responsible people who hold differing opinions on this issue.

But what caught my attention is Mohler saying that differences over gay marriage will break personal relationships. If it does, it will be a regrettable development. I say that because I know Christians who are open to gay marriage, some who are struggling with the issue, and many who oppose it with varying degrees of intensity. (My own views can be found here and here.) The idea that relationships would (or should) be shattered over differences on this issue is troubling. On what grounds? Because we disagree? Is that a justifiable reason to break off relationships? If so, what are the other theological and cultural issues over which we should sever ties? Where exactly does this end? The role of women in church leadership? Baptism? Divorce and re-marriage? Abortion? How evangelicals and Catholics view Mary?

I understand people wanting to maintain institutional and theological identity, which I consider in a very different category than maintaining personal relationships. I recognize, too, that I’m open to the charge (made against me before) that I’m pitting “moral rectitude” against love and welcome, and equivocating when I should stand strong. Which is entirely possible; my views contain at best only partial truths. Still, the reflex to fracture relationships strikes me as antithetical to the one Jesus took in his dealings with people. He not only didn’t break with people for holding the wrong doctrinal beliefs; He didn’t break with people who were living lives contrary to biblical teachings. The most difficult relationships Jesus had were, in fact, with the religious authorities of his time – not because they held doctrinal views He disagreed with but because they were self-righteous and hypocritical. Jesus even maintained relationships with those who, like Peter, personally failed him. After Peter’s three denials, Jesus didn’t treat him as persona non grata. Rather, he went on to say, “Thou art Peter, and upon this rock I will build my church.” Breaking relationships wasn’t Jesus’ way; it probably shouldn’t be ours, either.

I want to conclude on a somewhat more personal note that may help explain my reaction to what Mohler said. I’m someone for whom the Christian faith is interwoven into my life, for God’s grace (and the Cross) won my heart over a long time ago. Yet my faith pilgrimage has not been a particularly easy one, at least in the sense that I’ve long grappled with theological issues. It’s nothing I’m particularly proud of, and I rather wish I were hardwired another way.

In any event, people I’m close to – ministers, theologians, people in my Bible studies, and my wider circle of faithful friends – have heard me express uncertainty and confusion, puzzlement and even doubts about certain theological matters and Scripture verses. The list of questions I’ve had over the years is long and not worth belaboring here. My point is that these inquiries have been with me for much of my adult life. And my more important point is this: I’ve benefited mightily from people who are willing to engage with me on these matters rather than try to shut me down. They haven’t responded with platitudes, exasperation, lectures or intellectual contortions. They don’t personalize differences. And thankfully no one has ever broken off relations with me because I held what they perceived to be misguided views.

Many years ago I wrote a very close friend, Steve Hayner, who was president of InterVarsity Christian Fellowship and later president of Columbia Theological Seminary, concerned that a different view we had on a topic might injure our friendship. (I have written about Steve, who passed away earlier this year, before.) It was an issue that was important to both of us, and I expressed my worry: I’ve been around long enough to know that differences over issues can put strains on relationships. Relationships matter more than politics to me, I told him, but I realize, too, that sometimes politics can adversely affect relationships. I didn’t want that to happen in this case. I still have his response. “I want to assure you that I don’t think that our disagreements on most anything could affect our relationship,” he wrote. “My love for you has nothing to do with your views.”

My relationship with Steve was probably much deeper than the ones Dr. Mohler has in mind, but it seems to me the general point still holds. On the issue of gay marriage, Christians need not jettison their tradition or moral convictions. But they can act in a way that leaves open the path to greater understanding and even reconciliation; that creates the conditions for possible compromise on matters of public law; and that signals to the world, and to others within the faith, that the church is what the author Philip Yancey calls a “nourishing culture of [God’s] grace.” Stridency is not counted among the fruits of the spirit (for the record, the list includes love, joy, peace, forbearance, kindness, goodness, and faithfulness).

What the same-sex debate highlights is much more than simply people’s views on this particular issue or even the authority of Scripture. It also reveals our views toward Christian communion and community. It shows how we understand relationships and friendships in a broken world. We should not expect, and need not insist on, agreement on a wide range of matters. What I think we need is to aim for something else, and something essential: staying in relationship with people despite deep differences of opinion. In the Christian story, after all, God didn’t give up when it came to staying in relationship with us. And He had far more reason to give up on us than we have to give up on others. 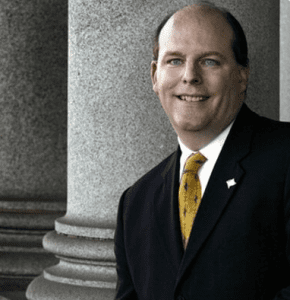 Peter Wehner is a contributing opinion writer for The New York Times and Senior Fellow at the Ethics and Public Policy Center. After serving in the Reagan and the first Bush administrations, Mr. Wehner led the Office of Strategic Initiatives in the George W. Bush White House. He writes widely on political, cultural, religious, and national-security issues and is coauthor with Michael Gerson of City of Man and with Arthur Brooks of Wealth and Justice