Last night, in a matchup against the Houston Texans, Chicago Bears quarterback Jay Cutler took a helmet-to-helmet cheap-shot to the head.  The linebacker who dealt the blow remained in the game — and so did Cutler.  He was hit in the head again on the next play, stayed in for another six plays, and then sat out the second half with a concussion.

The Philadelphia Eagles quarterback Michael Vick, and the San Francisco 49ers quarterback Alex Smith, were also concussed in games yesterday.  Cutler’s case drew special attention because he remained in the game after taking two vicious blows to the head — and Vick’s concussion might mean the end of his Eagles career.  According to reports, Cutler has already suffered six concussions in his football career.  Even a few concussions can put you at risk of lifelong health consequences, many of which do not emerge until later in life. 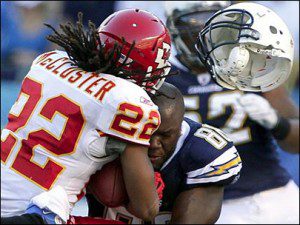 The problem is systemic.  To date, 3,850 former players represented in 177 separate suits — fully 30 percent of former NFL players — are suing the NFL for encouraging a culture of concussion and doing little to educate or prepare players for the consequences of multiple concussive and hundreds or thousands of sub-concussive blows to the head over the course of their careers.  According to one recent study, NFL veterans of at least five years are three times more likely than the general populace to die from some form of neurological degeneration such as Alzheimer’s and Parkinsons.  While the link between concussions and Alzheimer’s is disputed in the scientific community, there are too many NFL veterans who find themselves afflicted with depression, confusion, massive memory loss, and deteriorating motor control — leading in some cases to suicide.  Otherwise healthy men in their 40s and 50s not be forgetting the names of their family members.  They should not be unable to take a walk, for fear of forgetting their way back home.

And yet, 56 percent of NFL players say that they would hide the symptoms of a concussion in order to remain in a game.  Some of the respondents to the survey displayed the kind of hubris typical of a young athlete, someone who thinks that they know their bodies and they know when a concussion is serious or not.

I’m not a football player.  But I am a once-elite athlete whose career came to an end through injury.  In my freshman year at Stanford, I began to warm up for a competition when I realized that I had not prepared a final tumbling pass for my floor routine.  I decided to end the routine with a simple double-twisting layout — but I hadn’t actually done a double-twist for months.  Believe it or not, I was a powerful tumbler.  I had to really focus on limiting the height and rotation I generated on a double-twist.  Well, right there on the warmup floor, I did a double-twist for the first time in months, and, sure enough, I had too much height and too much rotation.  I landed flat on my back, my head hitting the floor at the same time as the rest of my body.

It would have been a terrible injury on a harder surface.  On the padded and spring-loaded floor, however, it didn’t particularly hurt.  I got back up and tried to continue the warm ups — but I found that I couldn’t remember my second or third tumbling pass.  So I went to a teammate and asked him to remind me how my floor routine went.  He looked at me funny, went to find the team captain, and the captain pulled me out of the competition.  I went to the hospital until I had stabilized and the world stopped spinning.

In the larger scheme of things, it was a tiny setback.  But I certainly would have kept going with the competition if my team captain had not intervened.  Then, of course, a year later, I broke my neck in a fall from the horizontal bar — and I continued in the competition.  In the “played while injured” competition, I usually win.  So I think I have at least a modicum of understanding of the mindset of an elite athlete who will pummel himself and tear his body apart in order to achieve.

Growing up in the gymnastics world, I cannot tell you how many times I heard the stories of gymnastics legends who suffered injuries and persevered in the competition.  And I get it.  Athletic competition is about striving to overcome your physical limitations, striving to overcome all challenges and achieve greatness.  No one forces these football players to play.  And they’re paid handsomely.

But a distinction needs to be made between passing injuries to the extremities — sprained ankles, broken wrists, torn tendons, hyper-extended knees, and the like, the vast majority of which will heal and be forgotten — and injuries to the spine and the head, which can have devastating lifelong consequences.  At its worst, sports culture makes no distinction (as my coach told me after I broke my neck, “We all break bones now and then”) and even encourages a kind of scorn for the body and its welfare.  The athlete — again, when sports culture is at its worst — refines and hones and trains the body, and yet treats it with scorn, as something that must submit to the power of the athlete’s mind and will.

If we the viewers do not press the NFL to make meaningful changes, the changes probably will not come.  Football culture is powerfully masculine, a modern gladiatorial arena celebrating harnessed aggression and controlled violence.  Many morally thoughtful people are fans of football.  They need to recognize that young men, many of whom know no better and have no better options, are sacrificing their lifelong health for the roar of the arena.  Young men — many of them young black men from poor families — should not have to destroy themselves, inviting injuries that will haunt them for the rest of their lives, for our viewing entertainment.