With apologies to H.L. Mencken, it appears that leftism is the haunting fear that someone, somewhere, may disagree with me.

It’s an apt description of what we now see on a nearly daily basis when leftist activists seek to censor the free market exchange of ideas—something that clearly scares the feathers off them.

Free Americans should share Mencken’s disdain for the repression of competing ideas and rally to defend the freedom to disagree, as recognized by our First Amendment. Of all the people who should understand this are the decision-makers at A&E who rely on their ability to broadcast freely every day.

As nearly every American is aware, Phil Robertson has been suspended indefinitely from the 14-million-viewer-strong A&E program “Duck Dynasty,” and the family says it is now in negotiations with the network as to what will happen with the show since they say they can’t imagine the show without him. Phil’s “infraction” was to say to GQ magazine that homosexual behavior is among other sins such as adultery and promiscuity, and that he doesn’t understand why a man would sexually desire another man over a woman.

While A&E recognized that Phil’s comments were “based on his own personal beliefs…. His personal views in no way reflect those of A&E Networks”—a clear attempt to distance themselves from his comments—it fails to see the importance of protecting Phil’s right to voice his opinions freely: “The network has placed Phil under hiatus from filming indefinitely,” the A&E statement said. And this comes from a network that has made millions off a show about a family that spends 30 minutes in each episode exercising free speech—and lots of it.

While tragic, this kind of swift silencing of speech is becoming standard fare. Within hours of the comments becoming public, and a predictable temper-tantrum from an organization ironically called GLAAD, A&E did what the “new tolerance” demands: It silenced someone in the name of tolerance…and probably diversity and inclusion, too. In truth, GLAAD would not have the platform it has today if not for the tolerance of those who did—and still do—ardently disagree with its views. 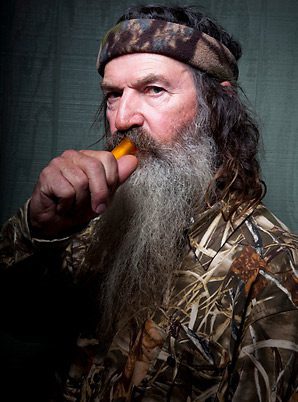 The primary appeal of “Duck Dynasty” is the family dynamic. The Robertsons disagree. A lot. They even argue, criticize, and poke fun at one another. The reason the friction exists is that the family is comfortable with, and encourages, the free expression of diverse opinions about everything from the best way to fish to the best way to run a country.

But whatever disputes may have ruled the day evaporate at the end of the day. The Robertson family’s abiding love, respect, and honor for one another brings them to the table together to pray, to share a meal, and to engage in a deep family fellowship that Americans long for and find irresistible to watch on their TV screens.

Even Time magazine writer Brandon Ambrosino, who doesn’t agree at all with Phil, agrees with the principles of free speech. How refreshing that a few on the left understand what is really at stake here. Yes, we disagree about the underlying issues, but at least we agree that robust dialogue should take place on this. Silencing speech does nothing but to reinforce the notion that some would “win” at all costs—even the cost of someone’s freedom.

Imagine an America in which people with diverse viewpoints on any number of issues, big and small, could come together to the social table and have an adult conversation. And if we don’t necessarily want to be at the table with them, why not just allow people to live their lives, speak their piece, and if necessary, make their peace with fellow citizens on their own terms?

The Robertson family is that America. America the way it’s supposed to be, not the intolerant, repressive, unrecognizable anti-America GLAAD is trying to create.

America’s long tradition of free and open discussion about important cultural issues is the cornerstone of a healthy society. Phil’s ouster is additional evidence of the one-sided censorship offered by cultural and political elites “outraged” by such basic and well-known teachings as the Christian view of what constitutes healthy sexual behavior.

A&E, as a media outlet, should understand better than most the free marketplace of ideas. But the network has instead offered a sacrifice on the altar of self-appointed speech police who don’t believe in that marketplace and have no tolerance for any beliefs other than their own.

So, as we write the history of America today, we can say in the spirit of Mencken that the “new Puritanism” (Impuritanism?) is “the haunting fear that someone, somewhere, might be happy, happy, happy.”

We’re sure Phil still is. Maybe A&E would be, too, if they didn’t decide to get mad like GLAAD.

Doug Napier is senior vice president of legal for Alliance Defending Freedom, an alliance-building, non-profit legal organization that advocates for the right of people to freely live out their faith.

December 20, 2013
Christmas, Americans and the Virgin Birth
Next Post