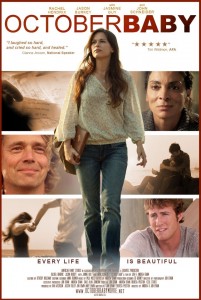 Take a look at the first paragraph:

More slickly packaged than most faith-based fare, “October Baby” gussies up its anti-abortion message with gauzy cinematography and more emo music than an entire season of “Grey’s Anatomy.” But not even a dewy heroine and a youth-friendly vibe can disguise the essential ugliness at its core: like the bloodied placards brandished by demonstrators outside women’s health clinics, the film communicates in the language of guilt and fear.

But this G-rated road trip is only an appetizer: the film’s pièce de résistance arrives in the haunted form of Jasmine Guy, playing the clinic nurse who assisted at Hannah’s birth. Her pivotal speech, a gory portrait of fetal mutilation and maternal distress, conjures a vision of medical hackery that is clearly intended to terrify young women — and fits right in with proposed state laws that increasingly turn the screws on a woman’s dominion over her reproductive system.

If you want to know anything about the film, forget NYT and check out the Los Angeles Times review. Check out this first paragraph:

Fine performances and authentic emotion trump some heavy-handed speechifying in co-directing brothers Andrew and Jon Erwin’s faith-based, anti-abortion drama “October Baby,” a film whose poignancy is hard to deny whatever side of the abortion debate you fall on.

As I write this, I’m headed to the annual conference of Heartbeat International, an international network of pregnancy help centers. (I’m on the board.) While Heartbeat’s work is certainly guided by the belief that abortion is a serious transgression of human rights, what moves me the most is that their work ends up having very little to do with abortion. They meet women when they are most in need, when they feel as if they have no choice but abortion, and they offer resources so that women can actually have choices.

But I digress. My point is simply that the NYT should know better. The “review” should have been cast as an op-ed. That, at least, would have been intellectually honest.

Meanwhile, if you haven’t seen October Baby, by all means do so. Don’t wait for DVD/download. (Here’s my piece on this from last week.)

April 13, 2012 The Catholic League: Making The Latest Mommy War Worse
Recent Comments
0 | Leave a Comment
Browse Our Archives
get the latest from
Catholic
Sign up for our newsletter
POPULAR AT PATHEOS Catholic
1