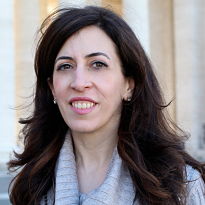 Dr. Pia de Solenni is a theologian, ethicist, and cultural analyst. She serves as the Associate Dean of the Augustine Institute – Orange County, located at Christ Cathedral. She also serves as theological consultant to the Office of the Bishop of Orange County. Dr. de Solenni is an expert in issues relating to women’s health, life issues, the new feminism, Catholicism, and culture. Her work has appeared in various publications including The Wall Street Journal Europe, The Washington Post, National Catholic Reporter, Our Sunday Visitor, and National Review Online. She is also a consultant member of the Pontifical Academy of St. Thomas Aquinas.

Dr. de Solenni has participated in many radio and television talk shows on various topics. She has appeared on MSNBC, “Hardball with Chris Matthews”, “The O’Reilly Factor”, CNN, ABCNews, among others. Dr. de Solenni has been quoted in newspapers nationwide, including The New York Times, The Washington Times, and The Associated Press.

For samples of her television appearances, click here and here.