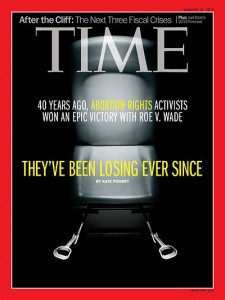 Bitterly, that is. Pro-abortion activists are losing? Really? If you believe that, I’ve got a bridge to sell you. Cheap.

After the election, I wrote about how the campaign had in fact been about values, just not values that I and other pro-lifers hold. In fact, we’d been too silent. For at least the second cycle of national elections, we – as part of the family values movement – bought in to the conventional wisdom that we should temper the values talk and focus on the economy. Look where that got us. The other side, however, was outspoken about their values on abortion and against traditional marriage. Hardly heard anything about the economy. They got the White House. We all got the fiscal cliff. [maybe we should call it a canyon since it seems to contain a lot of cliffs?]

Read my latest at National Catholic Register to see just how misleading the Time article is, especially considering the annual Planned Parenthood report that was released just days after.