What would it look like if we were free to live beyond gender stereotypes?

Western culture, circa 2013, offers a dizzying array of responses to that question. At one end of the spectrum: people like the Swedish parents who decided to keep their child’s gender a secret until the child settled on his or her own gender identity, or this UK pair, who have pursued a similar path for their child. These activists are bent on deconstructing social norms in a quest to create a gender-free zone around their kids.  (A couple of commentators have noted wryly that this is probably not the case when they’re changing their child’s diapers.)

At the other end of the spectrum are those who’ve landed in extremely hierarchical subcultures that are rooted in another place and time. Fill in your own blank with the rabidly-fundamentalist expression of faith of your choice. 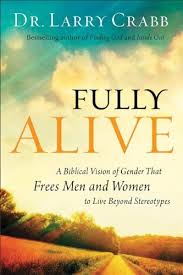 Dr. Larry Crabb wants Christ-followers to move away from entrenched positions on that continuum toward a life that reflects God’s intent and design in creating us male or female. His new book, Fully Alive: A Biblical Vision Of Gender That Frees Men and Women to Live Beyond Stereotypes (Baker, 2013)* has a subtitle containing a big promise. He explains, “The church’s response to our culture’s sex and gender confusion seems inadequate to me. We have so strongly focused on either the role of women or the equal rights of women that we have given little thought to the unique relational opportunities of men and women.” Those who are looking for ammo for their next debate on the topic of men’s and women’s roles in the church will not find it in this book.

Crabb wants us to move past our disordered understanding of God’s intention in creating us as male and female. “A woman is feminine when she relates in a way that invites others to see something about God that is irresistibly attractive, something about the relational nature of God that she was created to enjoy and reveal.” A man, he writes, is designed to mirror “the relational movement of the God who never forgets His covenant and never stops moving  in costly love, that man will never know what it means to be fully alive in his masculinity for the glory of God.” A woman is designed by God to open herself and invite others in. A man is created to move into the lives of others, then enter those lives. He suggests that our physiology reflects a deeply spiritual reality.

He briefly tackles the notion of mutual submission before moving on to a discussion about the gender-based fears that disconnect us from God and one another. A woman’s greatest fear is rejection, says Crabb. A man, on the other hand, processes his particular fear of aloneness through his filter of “weightlessness-aversion”, of being paralyzed by possible rebuff when he risks moving into another person’s life. If we would “cry the tears we most fear” so we can recognize the battle lines drawn around us and within us, we’d be more free to live from our centers. As a result,  he contends, we would be more integrated, spiritually-healthy human beings:

But that divine beauty lives only in our center. In every other region of my being, fallen ugliness rules. Apart from God’s Spirit, I am relentlessly determined to reach two goals my flesh values: to live well according to values I naturally embrace so that my life goes well according to preferences that honor me, and to depend on whatever means are at my disposal and under my control that promise to relieve both discomfort brought on by difficult circumstances and emotional suffering that is occasioned by unmet desires…

The world squeezes us into its way of thinking about gender and leaves us either defensively committed to unthreatening ideas or proudly open to self-enhancing ideas. The devil deceives us into the believing that the way of relating that feels right in the moment is right. And our flesh buys the lies and prompts us to live accordingly.

Crabb asserts that living into our created gender identity is an essential component of the narrow road to which Jesus calls us. “When our calling to reveal God by how we related as gendered image-bearers is embraced as our richest act of worship, we will find the narrow road that leads us deeper into our calling and we will walk that road through life in this world no matter how narrow it gets, anchored in eternal hope, persevering in sightless faith, and irrevocably committed to sacrificial love?…Will you believe that learning to relate as feminine women and masculine men is the way to live the life you were designed to live, the life you most want to live?”

As I read Fully Alive, I was reminded fairly regularly throughout of the core message of John Eldridge’s popular books discussing gender (Wild At Heart for men, and the women’s version, cowritten with wife Staci, entitled Captivating). Though the message may be similar, Crabb’s book is shaped by his career as a professional counselor. The book is filled with anecdotes from his counseling practice. It also contains a winsome, honest thread of soul-baring confession about his own masculine failures running throughout the book that serves as a helpful model for others who are trying to figure out the contours of the narrow road he describes.

I’ve long valued Crabb’s writing ministry – Shattered Dreams and Soul Talk both breathed life into me during a dark, lonely period of my life. Fully Alive had some helpful insights I plan to go back and contemplate, particularly in the section about how fear warps who God has created us to be. He stuck to his promise to avoid culturally-bound gender descriptions. There was not a whiff of “women wear pink, men use power tools” anywhere in the book.

Because Crabb used a pair of broad brushes (after all, there are only two genders!) to attempt to describe God’s purpose in creating us male or female, a few questions came to mind as I read:

Honestly, those questions leave me a little unsettled. Fully Alive’s value is as a discussion-starter if you are trying to push past cultural expectations so you can begin to consider why you might have been gifted by God with the gender he selected for you at the moment of your conception.

*I received a review copy of this book from the publisher with the expectation that I would share my review as part of the June Patheos book club. This is that review.