The Antonym of Hope

The December 5th edition of This American Life featured three haunting audio stories on the topic of regret. Host Ira Glass introduced the topic by noting the persistent nature of long-term regret: “Some regrets never go away. People tell us they forgive us, we try to forgive ourselves, and we still know like we did wrong, like we hurt somebody, it was real. And that feeling, it can immobilize you. If you’re lucky, it teaches you something you can take into other situations. But I think often it’s just like this pebble in your shoe. It teaches you nothing. It doesn’t slow you down, really. It just hurts. It just hurts in a way that does not stop hurting.”

Charles Dickens personified regret in the cherished novella A Christmas Carol. Three ghostly visitors representing the past, present and future showed Ebenezer Scrooge precisely how many pebbles of regret were in his shoe. I noted in If Only: Letting Go Of Regret the way in which Dickens offered a different vision of what it meant to face down those ghosts.

Scrooge at last wants to change. He vows to honor the spirit of Christmas generosity throughout the year, and cries, “I will live in the Past, the Present, and the Future. The Spirits of all Three shall strive within me. I will not shut out the lessons that they teach!”

Scrooge’s story illustrates the process by which our regrets steal from our present in order to feed the pain of our past while shackling us with chains that keep us from wholeheartedly following Jesus into our future.

Scrooge’s ghosts remind us that they don’t have to. Jesus promises us we can live unshackled from those regrets. Unlike Scrooge, who had a single epiphany that transformed past, present and future in one fell swoop, most of us will discover that freedom from the chains of if only happens as we follow Jesus with our sometimes-stumbling steps out of the prison of our if only’s.

Both men have something important to say about regret. Ira Glass is spot-on when he speaks about how much it hurts to walk with those pebbles. The Bible offers us images of people with permanent pebbles in their sandals. Jacob spent the rest of his life walking with a limp after wrestling with God, Paul proclaimed freedom to others from a prison cell and suffered from a humbling, excruciating physical limitation he called his “thorn in the flesh”. Dickens is right about the way in which our regrets can re-form if we’re willing to become students of them rather than allowing ourselves to be haunted by them. The best classroom is one where the Holy Spirit is the teacher. 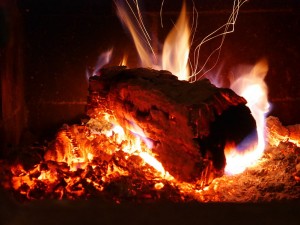 I recently had a conversation with someone who questions the decision he made two decades ago to relocate to another state to take a new job. The move was hard on his wife and kids, and the difficulty hardened into sort of a permanent state of affairs for some in the family. He is certain those struggles began the moving truck pulled up in front of his happy home. Since it was his job that uprooted them, he reasoned, he bears responsibility for the unhappiness has lingered in a couple of his children’s lives. Though this gentleman understands God’s forgiveness and redemptive power, his children don’t. He’s weary, and his once-burning hope for them – and himself, perhaps – has become ember over time. There is the potential for fire still, but now, today, his fire has mostly turned to ash.

Howie Espenshied wrote a wonderful reflection about the “Regrets? I’ve Had A Few” This American Life episode that added what was lacking to the observations made by both Ira Glass and Charles Dickens:

I’ve come to believe that regret is the opposite of hope. If regret is looking back remorsefully at our failings, hope is looking forward to the assurance that it all will be made up for – that every wrong will come undone, and all the sad things come untrue, as Tolkien wrote.

I’ve said it before, and I’ll say it again. Regret is a thief. It steals our lives from us, in pretty much the same way bitterness and unforgiveness do. Hope isn’t a backward-looking, wistful longing for do-over. Hope is trusting that the author of the Story will make all sad things untrue in the end.

If the ghosts and pebbles are louder than the hope, this song entitled “Dry Bones” by Gungor is my prayer for you this day. Give yourself a few minutes in the darkness of these sun-shortened days to lament with its words. Click the link below: