It’s the day after a holiday weekend, and I check in on Facebook. I scroll through my newsfeed and see pictures of a gathering of some of my old friends at a beach house, baby pictures from a former coworker, blurry shots of smiling faces at a family reunion, and a few random selfies of people I barely know atttending a concert. Journalist H.L. Mencken once defined Puritanism as the suspicion that someone, somewhere is having a good time.

Neither Puritans nor the rest of us need wonder if good times are happening out there. My newsfeed confirms it. Everyone is having fun. So. much. fun.

Let’s face it, some people use social media to ensure we all know how desirable, beloved, and overall awesome their life is (and aren’t we #blessed to be in his or her orbit, even we’re the Pluto to his or her sun). When a “friend” writes, “You guys! It’s so hot today here on the beach at the French Riviera. We’ll just have to cool off in our private villa this afternoon before we eat at a Michelin three-star restaurant tonight!”, it is the emotional equivalent of click-bait. I’m supposed to feel jealous, darnit. 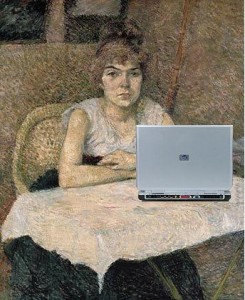 Those très évident (that’s French for “very obvious”) updates aren’t the ones that torpedo me. It’s some of the everyday, garden-variety pix and posts: a family at a T-ball game. A picnic with friends. Even a boring wedding shower. I’m tempted toward jealousy by some of the most unexpected pictures or bits of information about people I may or may not know well – or at all. They are having a good time. And in that moment, I am not. It’s really hard to have fun in my three-dimensional life when I’m coveting a curated two-dimensional version of someone else’s life.

Jealousy leads to sin, but I’ve learned it can also function as a thermometer: Is it well with my soul? Is the daily bread God is providing me enough for me? Or am I hungering for what I’m imagining he’s given to to someone else?

I understand Facebook and other social media function as a highlight reel of people’s life events both big and small. I’ve certainly used it as such, sharing pix from travel, get-togethers, and adventures with my grandkids. I also use it to share things that challenge me spiritually or intellectually, or might encourage someone else. I assume this is the case in varying degrees of most of those I elect to follow on Facebook. Though I do some filtering, it seems there’s always someone who pops in my newsfeed in order to updated her FB BFF’s about her latest vaca trial from the south of France.

I’ve started paying attention to those unexpected moments of jealousy that grab at me when I’m not expecting it. It’s easy to zap past them in an attempt to get to the next thing and dial down I-want-what-you-have-itis. Out of sight, out of mind. But that ick does not disappear from my soul, I’ve discovered. When I do an eye roll about Le Tribulation Gigantique in France or simply swallow that little sour ball of envy at the sight of old friends at a party to which I wasn’t invited, I am allowing the little bits of jealousy to accumulate in my soul like hair in a shower drain.

Sometimes jealousy is a good indicator that there are unprocessed regrets* buried just below the surface in me. Sometimes, my jealousy moments are an indicator I need a Sabbath from social media in order to recalibrate. Other times, my jealousy points out an unmet need in my life. I am now making a concerted effort to pay attention in prayer to the why this or that provokes envy in me. Who would have imagined that social media would be responsible for this invitation to mindfulness? Certainly not me, said the woman who watches cat videos.

How does social media work on your soul? Is jealousy a problem? Or is there another temptation you struggle with as a result of your exposure, like laziness/sloth, for instance, as you while away the hours reading about other people’s lives? Or maybe little bits of lava-like anger boil up in you as you’re stalking the online exploits of an old boyfriend or boss who done you wrong?

* I wrote about this topic here.