What Are You Really Doing This Season?

The language of “seasons” in our lives is a familiar and useful, if tired, metaphor. If familiarity doesn’t breed contempt, it certainly does cause us to stop thinking about what we might really be saying when we throw it out there. When we talk about the seasons of our lives, it is a way in which we talk about life stages. Season talk typically means something like:

My best guess is that this handy shorthand to describe the arc of our lives comes from the language of Ecclesiastes 3:1-8 and has been embedded in our consciousness by Pete Seeger’s folk song (popularized by the Byrds) Turn, Turn, Turn.* Ecclesiastes 3:1 tells us there is an a fixed place in time for every stage in our lives, and specific movements happen within each of these seasons for God’s purposes and our good. One season’s growth is necessary for the purpose of the next. You can’t have autumn’s fruit without spring’s flowers and summer’s rapid growth and development.

We tend to talk about these seasons mostly in terms of tasks and events. For example, summer’s tasks include but aren’t limited to things like launching into adulthood via job or schooling, searching for a mate, and having children. Winter’s tasks might include dealing with increasing health challenges, downshifting from full-time employment, and saying goodbye via funerals to peers.

I’ve certainly used “seasons” lingo when I’m having conversations with stretched-to-the-breaking-point young women who are trying to figure out how to balance career, church/community and childrearing responsibilities. I do so as a way of asking them to consider sequencing their hunter-gatherer pursuit of “having it all”. Society tells us we can have it all, but the reality for many of us is that we may not be able to have it all at the same time. If you’re an ambitious young adult smack-dab in the middle of the years you’re building your life, it takes a good measure of faith to trust that the next season will have space for dreams that seem to be getting crowded into a corner just now.

During a recent conversation with a young adult friend, I had an ah-ha about the way in which we miss something essential when we reference the notion of seasons in our lives. When we focus on what we’re doing, we may miss the opportunity to consider what God himself has built into a season and into our human development that drives what we’re pursuing or focusing on during that time in our lives.

For example, my friend was expressing how stretched she was as she pursued her full-time career, mothered her young son, and wanted to jump headfirst into a lay leadership role at church with her husband. “Most of the women with young kids in my church are stay-at-home moms,” she said. She had come to terms that her life balancing career and family made her the odd mama out among her church friends. A few had made off-handed remarks to my friend to the effect that she was maybe a little too ambitious or that her faith in Jesus was lacking. She was wise enough to recognize the comments came from their own insecurity, and gracious enough to confront when necessary and forgive always. 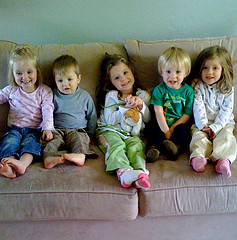 “Even if we could afford for me to stay home, I don’t think I’d want to do so full-time,” she said. “My husband and I are in agreement about my need to work both for financial reasons and because it is what God has called me to at this time in my life. But here’s what I don’t get about all these young moms at church. They don’t seem to see that they’re just as ambitious and driven as I am. They seem to have channeled their ambitions into being superstar mothers and homemakers, and there’s always a sense of competition among them when they all get together. Until I became a mom and started hanging around with these women at church, I didn’t know cloth diapers, interior decorating, breast feeding, quantity cooking, essential oil usage, and infant sleep schedules were contests with winners and losers.”

I told her that in the summer season of their lives, all of them were being fueled by ambitions of one kind or another. They’d assigned “ambition” only to those who worked outside the home, rather than recognizing that ambition was key to this season in each one of their lives. The deep inner drive to build a life and succeed in a vocation fuels the kind of growth that is specific to the “first adulthood” years of our lives. It is as much a part of this season of our lives as flower becoming fruit in the hot summer sun. Recognizing the way we’re shaped by it – whether in ugly conversations about attachment parenting with other moms of young children or in our drive to win at work – can help us submit ourselves to God, keep us connected to the Vine who sustains our growth, and the Vinedresser, who shapes it.

I also told her the transition between these seasons in life is just as organic and unscripted as the way seasons change in my part of the country – the upper midwest. We don’t move neatly from one season to the next around here. We stumble forward, back and sideways for weeks. So it is as we move through messy adolescence and into young adulthood. And even more so as we hit midlife, and transition into autumn. During Autumn, ambitions tamp down a bit, and if we’re growing as God designed us to grow, we may be dismantling parts of what we’ve built in the first half in order to create meaning and leave a legacy for others. I’ve been told by others the transition to winter isn’t quite as dramatic emotionally and spiritually, if we’ve allowed God to work in us through the other seasons of our lives. (Winter itself, on the other hand, is time stripped bare, an inward culmination of all that has come before it as well as preparation for what’s next.)

How have you seen the characteristics of a particular season you’ve lived in your life drive your choices and concerns?

* For a wonderfully moody version of this song, click here to watch this interpretation by Norweigan vocal artist Kari Rueslåtten.

September 10, 2015
At The Intersection Of Time And Eternity: Rosh Hashanah
Next Post