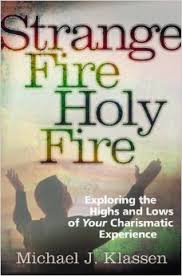 I wish I could give a copy of Michael J. Klassen’s Strange Fire, Holy Fire: Exploring the Highs and Lows of Your Charismatic Experience (Bethany House Publishers, 2009) to every person I’ve ever met in the various Pentecostal, Charismatic, and Third Wave/Vineyard congregations of which we’ve been a part. Whether they’re still a part of one of these congregations, have jumped to a different stream within the Church, or have chosen to hang out the “Done” sign on any formal church involvement, Klassen’s book is a helpful insider’s view from someone who has been there…and there…and there. He’s seen it all, participated in most of it, and has emerged with a chastened, mature perspective on the movement(s). Klassen is not speaking as an enemy of the charismatic world. Instead, he calls himself at the outset of the book both “a critic and apologist”. He manages the tricky business of being both detractor and explainer by speaking to his readers with a warm pastoral voice meant to help them figure out how to toss the bathwater while hanging on to the baby.

The Oral Roberts University and Fuller Seminary grad covers just about every topic that has marked the modern Pentecostal/Charismatic movement including definitions of the various sub-groups fitting under this umbrella, tongues, the thirst for power, authority, titles, personal prophecy, legalism, the Word of Faith movement, wacky theology, anti-intellectualism, healing, the nature of faith, emotionalism, spiritual warfare, and suffering. “Tongues might be the litmus test of a true-blue charismatic, but what we craved was power,” Klassen writes. “The charismatic movement is more about power than anything.” Charismatics don’t believe Jesus’ words are a set of propositions they need to adopt, but instead lean hard on Jesus’ promise that his followers would do greater works than he did.

Every single emphasis from within the movement can be found in Scripture; so, too, can evidences of excess and abuse/false teaching from the very beginning of the Church. Two thousand years of Church history prove that we are still vulnerable to the same temptations our spiritual forebears were. Klassen gives particular emphasis to the Word of Faith movement, understandable given his own church and educational background. TV prosperity preachers wearing expensive, custom-tailored Italian suits may be the most visible expression of this movement, but the seeds of Word of Faith thinking have been sown across the Charismatic/Pentecostal world. “If I didn’t know better, I would think that some people in the Word of Faith movement were simply charismatic Christian Scientists,” he writes. With a focus on speaking just the right words to reflect mastery of and belief in a set of deistic principles (“Don’t say, ‘I was just laid off from work’, say ‘God is positioning me for a fulfilling job that pays me more money than I ever dreamed”), I found this reliance on formula deeply rooted in most of the Charismatic congregations of which we’ve been a part, though none were officially affiliated with any of the Word of Faith teachers/ministries.

In the midst of his discussion on pain and suffering, the author of Hebrews offers these words: ‘Therefore, holy brothers, who share in the heavenly calling, fix your thoughts on Jesus, the apostle and high priest who we confess” (Hebrews 3:1).

In the midst of pain and suffering, the author doesn’t say:

He says, ‘Fix your thoughts on Jesus.’

Klassen offers practical, grounded coaching for those wounded by the specific excess he addresses in the chapter as well as posing thoughtful questions for those who are still part of churches where the excess is the main course each week. The last couple of decades have found more mainstream Evangelical congregations joining their Catholic and Anglican brothers and sisters in integrating charismatic belief and practice into their common life. As a result, independent charismatic congregations and historical Pentecostal denominations…”seem to be working hard to remain ‘a peculiar people.’ They chase trendy theologies and become increasingly addicted to hype,” Klassen notes. “What does the future hold for independent charismatic? If they continue trying to be peculiar, they’ll eventually fade away into oblivion, because the mainstream churches will offer something more grounded and palatable to society.”

In my own case, I’m not sure I was in search of power as much as I was longing to experience God heart, soul, mind, and strength. I first encountered the charismatic movement during the 1970’s via televangelist Pat Robertson’s 700 Club, a bunch of books I bought at a Christian bookstore written by faith healers Charles and Frances Hunter, and attendance at a Saturday night gathering connected with the Shepherding Movement. I prayed during those years to receive the baptism with the Holy Spirit, but soon learned that the experience was not the essence of discipleship – keeping in step with the Spirit was. My husband and I were part of a “second wave” charismatic church for several years before landing in a series of “third wave” Vineyard/Vineyard-influenced churches throughout the 1990’s and into the first couple of years of the new millennium. We logged time at the International House of Prayer (Klassen doesn’t address this influential rivulet flowing from the Vineyard movement in his book) before moving back into mainstream Evangelicalism during the last decade. The charismatic movement modeled for me the gifts of unbridled passion for God and a certainty that God was willing to intervene in the affairs of humanity here and now. It also left me with the scars of spiritual abuse and an ongoing frustration with sloppy theology because of the primacy of emotional experience in those congregations.

I recommend Strange Fire, Holy Fire to you if you too have “been there”. Even more, I commend it to you if you still are “there”. May we all grow as one body toward the spiritual maturity, which is not the same thing as quenching the Spirit. Michael J. Klassen helps us see the difference, and choose the former while not doing the latter.

Have you spent time in a charismatic or Pentecostal congregation? Has the experience been positive or negative for you?

November 24, 2015
Giving Thanks From The Valley Of The Shadow
Next Post

December 3, 2015 At The Intersection Of Time & Eternity: Chanukah
Recent Comments
0 | Leave a Comment
Browse Our Archives
get the latest from
Evangelical
Sign up for our newsletter
POPULAR AT PATHEOS Evangelical
1

What If Science Caused the Pandemic?,...
Cranach
Related posts from Pilgrim's Road Trip