Giving Thanks From The Valley Of The Shadow

If you have suffered a loss or have a fractured family, holidays like Thanksgiving can be more endurance test than blessing. Memories of happier times in the past and the nagging sense that most everyone you know and all those people you don’t know but with whom you’re connected on social media are experiencing #blissed #blessed #family #togetherness on the holiday. A few years ago in this piece for the Christianity Today Her.meneutics blog, I talked about the effect social media was having on the way in which we give thanks to the Giver. I wrote these words in that post:

...gratitude has morphed into a feel-good trending topic instead of what it really is according to Scripture: a costly expression of worship.

Mourner, any thanks to God you can offer today is a costly expression of worship. I found my model for gratitude yesterday in my devotional Scripture reading when I read this passage about a woman who knew loss.

As Jesus looked up, he saw the rich putting their gifts into the temple treasury. He also saw a poor widow put in two very small copper coins. “Truly I tell you,” he said, “this poor widow has put in more than all the others. All these people gave their gifts out of their wealth; but she out of her poverty put in all she had to live on.” (Luke 21:1-4) 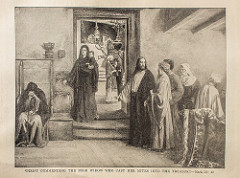 One commentary I consulted noted that these coins had a value equivalent to the pay a minimum-wage laborer would have received for five minutes of work. The commentator went on to say, “Jesus calls it the greatest gift. She ‘has put in more than all the others. All these people gave their gifts out of their wealth; but she out of her poverty put in all she had to live on.”‘This last phrase can be translated ‘out of her poverty put in all her living’ (ek tou hysterematos autes panta ton bion). The contribution really came from ‘all that remained of her life.’ Jesus’ point is not so much to rebuke others’ contributions as to exalt a contribution that otherwise would have been underappreciated.”

Too often, we think about giving thanks to God in terms of a “should”. It is, of course. A quick skim through the Psalms reminds me that thanksgiving is an imperative, not a suggestion. While we’re called to give thanks in all circumstances, the story of the widow’s two coins reminds us that it is not the quantity of our thankfulness lists as much as it is the quality of our offering. The ones most costly to us carry with them a different valuation. Giving out of our poverty comes from a different place in our soul than does giving from our overflow. Jesus modeled this most profoundly as he offered thanksgiving at the last meal he shared with his disciples. His words of gratitude were spoken from the entrance to the valley of the shadow of death. The giving of costly thanks is at the heart of communion.

In the face of loss, you may feel as impoverished and depleted as did the widow at the Temple. The One prompting us to give thanks is not asking for a religious performance that denies your broken heart nor is he who also gave us the language of lament asking you to muzzle your sorrow. What thanks you may muster at this point in your life may seem to you to be frayed and practically worthless; two bits of next-to-nothing. But those fragments of thanks birthed from what remains of your life in the wake of your loss are valued by God as of great worth – just as he values you.

Fellow griever, I am thankful for you, and am praying for you this week.

November 23, 2015
Unintended Consequences Of The Jesus Movement's Music: A Word From Dr. Chuck Fromm
Next Post