When a renewal movement hits the church, things are bound to get messy. Some of the mess is the work of the Holy Spirit as he reanimates dry bones. Some of the mess comes when a bunch of broken human beings try to touch, help, hinder, or profit from the beautiful chaos. We’re a generation removed from the Jesus Movement of the late 1960’s. Poll after poll tells us that Evangelicalism, the primary beneficiary of this Movement, is having an identity crisis. Our children aren’t sticking around in our churches – and neither are many of us. We are known in caricature for our culture warring and mean-girl ways. Jesus is our brand, not our Lord. (Certainly not all of us fall into this category, of course. I’ve known lots of generous, forgiving, faithful Evangelical saints who reflect the love of Jesus through their words and works.)

The Church is in a state of transition in the West, though in the global South and East, she is growing like fruit-bearing kudzu. This transition here is an opportunity for a bit of spiritual housecleaning in the wake of the hippie-flavored chaos of a generation ago. Part of that housecleaning might perhaps create some space for reflection on the unintended consequences of some of our choices and desires. We reap what we sow.

To that end, I’m launching an occasional series in this space called The Jesus Movement’s Unintended Consequences. While some of these topics have been the subject of books and studies, I’m simply lobbing a few observations out there for all of us to consider as we grapple with where we’ve been so we can see him more clearly, love him more dearly, and follow him more nearly….

(If you lived through the `70’s or like Broadway musicals, you know the next words in this sentence. For the rest of you reading this, the next words are “day by day“. Tambourine optional.) 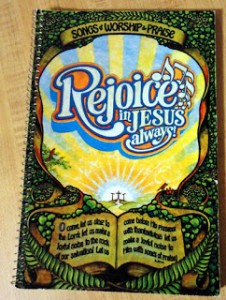 Since we’re on the subject of music, I’ll start with praise songs. When we Jesus Freaks huddled around campfires or gathered in ad hoc prayer meetings during the 1970’s, our soundtrack included songs like:

This music was as basic as it came; easy to learn, sing and play. Anyone who knew a few basic guitar chords could strum so a group could sing its praises to God. The hymns of older generations required so much extra equipment – organs, choir robes, practice, and the ability to carry a tune. The 1960’s taught us Boomers to question authority. Filter that questioning through the lens of the anti-institutional Jesus Movement, and we ended up with music that echoed pop culture’s ethos – our praise music was a hybrid of folk and California rock, with a splash of country. At the same time, there were stage musicians like Love Song, Barry McGuire, and Larry Norman who were proclaiming this stripped-down gospel through performance-based rock `n roll. But their songs were different than the campfire-style sing-a-longs we used to praise our Lord in small groups and eventually, in church.

Forty or so years later, what we got:

What desires and/or unintended consequences would you add to these lists?

November 13, 2015 The Jesus Movement's Unintended Consequences: The Rapture
Recent Comments
0 | Leave a Comment
"The problem of Nepotism within church is really only an issue because we run church ..."
Roland Pope Nepotism And The Local Church: A ..."
"Followed a link from CT. I find this to true. The church I attend doesn’t ..."
The Rooster 40+ And The Church/Pastoring Those In ..."
"This has recently just occurred at my church and my concern has been the children. ..."
RenewingmymindDaily The Collateral Damage From A Youth ..."
"Childishness, Richard. I keep telling you to try grow up."
rose white Old Testament Foundations And Hebrew Roots
Browse Our Archives
get the latest from
Evangelical
Sign up for our newsletter
POPULAR AT PATHEOS Evangelical
1