At The Intersection Of Time & Eternity: Epiphany 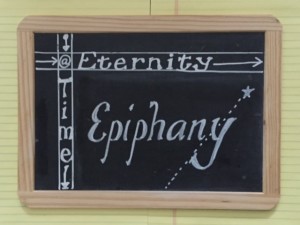 We three kings of Orient are

Field and fountain, moor and mountain

The royal seekers featured in this beloved carol are a part of every manger scene, usually represented by three kingly figures bearing gifts of gold, frankincense and myrrh. These star-following wise men played an important prophetic role the early days of the life of Jesus. Their arrival in Bethlehem to pay homage to the baby King born in a lowly stable is at the heart of the day that marks the end of the Western Christian calendar’s Christmas season, and begins the next movement of the Christian calendar – the season of Epiphany.

I’ve been blogging a 5-minute intro to each major holiday in both the Jewish and Christian calendar. The Jewish festal cycle and the Christian calendar each offer holidays that are meant to serve as an on-ramp into the intersection of time and eternity. These days of yes point us beyond our own everyday agendas and connect us with our place in a bigger, more beautiful story.

If you attend a non-denominational congregation, your church may focus primarily on Christmas and Easter along with non-holiday holidays like Mother’s Day, Father’s Day and Church Picnic Day. If you attend a liturgical congregation, you’re likely familiar with the rhythms of the Church calendar, which recounts the story of Jesus’s life through a yearly cycle of observance. If you have a Jewish background or attend a Messianic congregation, you recognize the distinct cadence of the Leviticus 23 feast cycle and historical holidays of the Jewish calendar.

For each one of us who loves the Scriptures and wants to get to know the Author of those Scriptures better, each holiday in the Jewish calendar and the traditional Christian calendar is an opportunity to learn – and then take that learning off the page/screen and consider how to include it in your own practice.

Luke 2:-12 recounts the unexpected visit of these men from the east to visit the infant Jesus. It is highly unlikely that they arrived on the scene at the same time as the shepherds. In addition, most scholars and members of many religious traditions believe there were more than three of them, though their number in popular and many artistic renderings is reduced to three in reference to the gifts they brought with them. These influential Gentile men were of the ruling or intellectual elite in the country/region from which they came.

Epiphany reminds us of how Jesus filled full the mission to the world God had given the Jewish people – a mission described in Isaiah 42:6-7: “I, the Lord, have called you in righteousness; I will take hold of your hand. I will keep you and will make you to be a covenant for the people and a light for the Gentiles, to open eyes that are blind, to free captives from prison and to release from the dungeon those who sit in darkness.” He came to find those from within his own Jewish community who recognized their distance from God. He sought those outside this community, people to whom his own people had neglected to reflect God’s light. The Wise Men from the East present us with a powerful image of what it means to be a seeker, and Epiphany demonstrates the wonderful “aha!” of their discovery: The fulfillment of their seeking was an incarnate God who had come seeking them.

The feast of Epiphany first appeared on the church calendar in the fourth century. As the church split between West and East by the mid-eleventh century, the feast came to carry two different emphases.

In the East, the Orthodox family of churches gathered into one day the commemoration of Jesus’ birth, childhood (circumcision, presentation/naming at the temple), baptism by John and the visit by the Magi. Church leaders believed Epiphany, also known as Theophany (“manifestation of God to humanity”), was a fulfillment and celebration of the meaning of Chanukah, the Jewish Feast of Lights.

In the West, the day had a single focus—the revelation of the Messiah to the Gentiles. The weeks following January 6 in the Western Christian calendar continue the themes introduced on Epiphany. Congregations trace the life of Jesus through his baptism and first public miracle at the wedding at Cana. Other themes of the Epiphany season include Jesus’ call to his disciples to follow him and his signs and wonders. The season of Epiphany concludes the Sunday before Lent, with the commemoration of the transfiguration of Jesus.

Various cultures around the world observe this day in some fascinating ways. One particularly nice tradition is that of blessing one’s home to serve as a launching place of mission and service in the world. T.S. Eliot’s famous poem, The Journey Of The Magi, asks us to imagine from the point of view of the Magi what it might have been like to return home after they visited Bethlehem. It ends with these haunting words:

…We returned to our places, these Kingdoms

But no longer at ease here, in the old dispensation,

With an alien people clutching their gods.

I should be glad of another death.

Epiphany reminds us that our mission in this world flows from our apprehension of Jesus – and this revelation of him means that we will never be the same again.

He who is fully God chose to become fully human in the most humble and helpless manner imaginable: a baby cradled in his mother’s arms. The Magi recognized Jesus’ divinity in the midst of very un-regal circumstances. How about you and I? Will we?